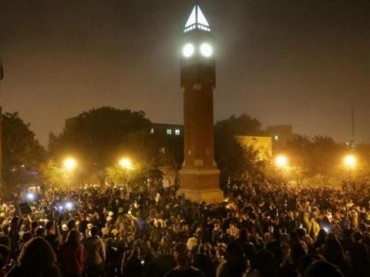 ST.LOUIS, Mo.  – Faced with extreme criticism and backlash from alumni and others, Saint Louis University’s President Fred Pestello has apparently altered plans for a commissioned statue meant to honor an “Occupy SLU” sit-in protest that occurred on campus last October, now saying the monument will honor the school’s Jesuit values.

For six days last October, protestors refused to leave the urban campus. Living in tents in the quad and flying an upside-down American flag, the anti-police demonstrators had decried alleged racism in law enforcement and accused officers of brutality and indiscriminately killing black people.

To convince the protestors to leave, Pestello had agreed to all 13 of their demands, including a “mutually agreed upon commissioned artwork.” In a January update on that agreement, he noted administrators had commissioned two renowned African-American artists to fulfill that agreement by creating a sculpture that honored the sit-in.

But news of the artwork, considered by many to be honoring what they saw as an anti-police demonstration, sparked outrage among some alumni, who have threatened to pull funding. The backlash apparently has weighed heavily on President Pestello, who more recently disputed the description of the monument as honoring an “anti-police” protest, despite the fact that the university’s own memo on the subject declares the monument aims to “captures the spirit and importance of the demonstration and encampment at Saint Louis University on October 13-18, 2014.”

In a university-wide email sent out last week under the subject line “Clarification of Artwork,” Pestello wrote the monument will not “be anti-police or would honor the Ferguson protesters,” and made no mention of the “Occupy” sit-in held on campus.

Yet in an email with The College Fix last month, Pestello implied the monument was to honor the sit-in.

“(The designers) took a tour of the campus and looked at pictures and videos of the protest. They talked to a number of people and then returned home,” he had said. Pestello also told The Fix the “most obvious place” for the proposed monument was near the university’s clock tower, where the protests took place.

In his email last week to the campus community, Pestello walked back those comments, saying the monument is meant to highlight the university’s Jesuit mission.

“What we envisioned with the artwork was a way to honor our shared Jesuit values that promote inclusion rather than division,” he wrote.

Meanwhile, many professors at Saint Louis University have clamored to defend their embattled president over the Jesuit university’s controversial “Clock Tower Accords” – the moniker for the 13 demands agreed to last October to get the protestors to leave the campus.

Other “accord” promises included the establishment of a diversity speaker series, sponsorship of a national conference on racial equality hosted by SLU, and additional college workshops for area students in disadvantaged neighborhoods.

Prominent SLU alumni have also voiced concern over the costs of all these new initiatives, and criticized the closed-door nature of the agreement, saying they felt left out of the decision-making process.

The faculty senate at the university has come to the defense of their president.

“We have never been prouder to say that we are members of the SLU community and we wholeheartedly support our President,” its members wrote in a recent statement regarding the “accords.”

In its statement, emailed to faculty last week, the Faculty Senate offered its own spin on the accords.

“The Clock Tower Accords are not the product of blackmail. They are not a case of a university administration’s acquiescence to illegitimate demands,” the senate stated, instead arguing the accords are a “product of courageous leadership” from first-year president Pestello.

“[T]hey are the product of courageous leadership unwilling to close its eyes and turn its back on the invidious evil and injustice of racial prejudice and inequality,” the statement declared.

However, the senate’s strong support of the “accords” rings incredibly hollow when factoring in its recent history.

Its defense of Pestello comes just two years after the senate passed a nearly unanimous vote of no confidence on Pestello’s predecessor, Rev. Lawrence Biondi, after faculty complaints of quick decision-making without faculty or student input and a lack of shared governance.

The 2012 vote stemmed from the faculty’s displeasure with the “administration not including them in key campus decisions,” according to the St. Louis Post-Dispatch.

Furthermore, faculty criticism toward Biondi also focused on his commitment to campus buildings and projects, including artwork. Some professors complained this commitment came at a cost to academic needs, according to St. Louis Public Radio.