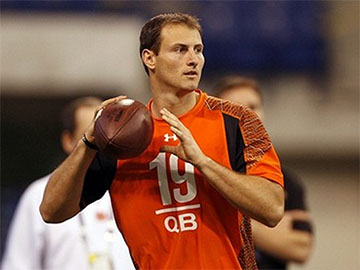 It’s not just so-called survivors who are speaking out by name about their alleged assaults – it’s those accused of assault.

Former Yale quarterback Patrick Witt, now a Harvard law student, shared his story about how an “informal complaint” by an ex-girlfriend “nearly ruined” his life, in the Boston Globe – and why Harvard’s new policy (blasted by its own law faculty) is so dangerous:

[Yale’s then-newly-created University-Wide Committee on Sexual Misconduct] summoned me to appear and styled the meeting as a form of mediation. Its chairman, a professor with no prior experience handling dispute resolution, told me that I could have a faculty adviser present but no lawyer, and instructed me to avoid my accuser, who, by that point, I had neither seen nor spoken to in weeks. The committee imposed an “expectation of confidentiality” on me so as to prevent any form of “retaliation” against my accuser.

I would say more about what the accusation itself entailed if indeed I had such information. Under the informal complaint process, specific accusations are not disclosed to the accused, no fact-finding takes place, and no record is taken of the alleged misconduct. For the committee to issue an informal complaint, an accuser need only bring an accusation that, if substantiated, would constitute a violation of university policy concerning sexual misconduct. The informal “process” begins and ends at the point of accusation; the truth of the claim is immaterial.

He goes on to state that Yale pretty much lied to him about the consequences of this “informal complaint” – Witt’s post-graduation job offer was rescinded and his potential Rhodes Scholarship became untenable following an “anonymous tip”:

I cannot begin to describe how exasperatingly difficult it has been to try to explain to people what an informal complaint is and how there was never any evidence — nor any effort made to discover evidence — to substantiate the claim made by my accuser. My summer employer and the NFL certainly couldn’t understand it, and the media flat out didn’t care — the words “informal complaint” were all that was needed to establish my guilt in their eyes.