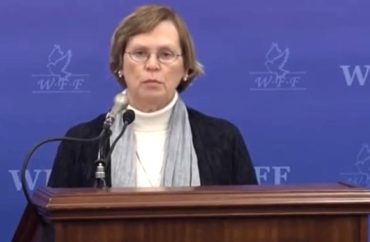 A gender studies professor is standing firm despite facing calls for her dismissal for writing an opinion column that argued that the excesses of the transgender movement are a threat to biological women.

Professor Donna Hughes is the director of graduate studies in the Gender & Women’s Studies Program at the University of Rhode Island.

Hughes’ piece, published Feb. 28 on a fourth-wave feminism website called 4W, argued that “the trans-sex fantasy has imagined—and is enacting—a world in which how a man feels is more real than his actual reality. And now the fantasy has the weight of the federal government behind it.”

The professor began her column by arguing that conspiracies on the right, such as QAnon, have counterparts on the political left, that being the “trans-sex fantasy,” which she defines as the “belief that a person can change his or her sex, either from male to female or from female to male.”

“The biological category of sex, particularly women’s sex, is being smashed. Women and girls are expected to give up their places of privacy such as restrooms, locker rooms, and even prison cells,” she wrote.

After it was published, Twitter users began filing complaints with the university regarding Hughes, according to an emailed statement from Hughes’ lawyer, Samantha Harris, to The College Fix.

“Prof. Hughes has become the target of a coordinated online campaign by people soliciting students to file complaints about her with the university and, in the words of one Twitter user, to ‘take her down,’” Harris said.

In response to the pressure, the University of Rhode Island distanced itself from Hughes, issuing a statement saying “The University does not support statements and publications by Professor Donna Hughes that espouse anti-transgender perspectives and recognize that such discourse can cause pain and discomfort for many transgender individuals.”

While the university statement defended free speech, it noted that a “faculty member’s First Amendment and academic freedom rights are not boundless, however, and should be exercised responsibly with due regard for the faculty member’s other obligations.”

But Harris, in her comment to The Fix, argues that URI’s statement implies that Hughes’ article may not be protected by the First Amendment “because she somehow failed to show appropriate restraint in the expression of her opinion.”

“This simply is not the case,” Harris said. “Her article is protected by the First Amendment quite apart from questions of academic freedom, because she was expressing her views as a citizen on a matter of public concern.”

“The fact that she may be well-versed in this subject by virtue of her work does not transform this into speech made within the context of her employment – in fact, her bio at the end of the article does not even mention her affiliation with URI.”

Despite the backlash, Hughes said she will not back down.

“I’m known as someone who expresses my opinion and have been willing in the past to advocate for the rights and protection of women and girls and to oppose laws and policies that result in their harm and exploitation,” she told The College Fix via email.

Her online bio states she is one of the founders of the academic study of human trafficking and also launched in 2016 the journal Dignity: A Journal of Sexual Exploitation and Violence, of which she continues to serve as editor-in-chief.

Hughes said she is dissatisfied with the university’s statement.

“The university needs to state they are committed to academic freedom and free speech, and take steps to demonstrate that those principles and rights are more than words,” Hughes said. “They need to affirm that I was within my rights to write my opinion and that I will suffer no adverse employment consequences for doing so.”

At least one scholar who is watching this situation said Hughes is the wrong person to pick a fight with.

“If the U of Rhode Island thinks it can intimidate–or silence–Women’s Studies professor Donna Hughes, it will be amusing to watch the trainwreck,” Princeton Professor Robert G. George tweeted.