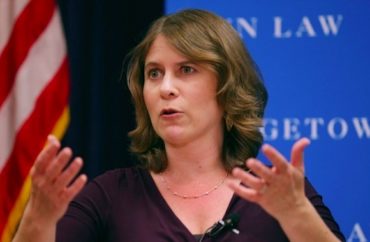 A Georgetown University law professor says Americans are “slaves” to the U.S. Constitution as their adherence to that document — written by a “tiny group of white slave-owning men” — has turned the country into a “war zone.”

“[T]here are people all over the world who have lived during armed conflicts, and when does the mortar fall on your house, when does the soldier or the tank come down the street and just kill you,” Brooks said. “We are now living in that world, too, and we have brought it on ourselves.”

“That world” obviously would be due to the Second Amendment to the Constitution, and according to Brooks “we are essentially slaves to a document that was written more than 230 years ago.”

“And we cannot break out of the bondage that we have imposed on ourselves from feeling like we have to– everything by our Supreme Court is decided in reference to this ancient document which is just not serving us well,” Brooks continued. “It is causing enormous problems and enormous tragedies at this point.”

Did the law professor forget that the “ancient document” established a very clear procedure by which to “break out of [its] bondage”? It’s called Article V.

Seven years ago when the Supreme Court issued another monumental verdict — the legalization of gay marriage nationwide — Brooks wondered if the decision could be used to defeat ISIS:

“I’ll tell you the best way to send a message to those masked gunmen in Iraq and Syria and to everyone else who gains power by sowing violence and fear. Just keep posting [online] that second set of images.” (She linked to several New York Times photos showing Americans celebrating the Obergefell v. Hodges decision.)

According to her faculty page, Brooks “has combined law teaching and scholarship with stints in government service and a career in journalism.” She is co-founder of the foreign policy podcast Deep State Radio, an “adjunct senior scholar” at West Point’s Modern War Institute and was a reserve police officer with the Washington, DC Police Department for four years.

MORE: No, the Second Amendment wasn’t about racism