Doesn’t dispute accuracy of what she privately said

Three years ago this month, the University of Pennsylvania Law School removed a professor from teaching required classes for publicly saying she wasn’t aware of black students ever graduating in the top quarter of the class.

Amy Wax’s dean, Ted Ruger, accused her of making “false” claims. He refused to get more specific, though, only saying black students have graduated “in the top of the class.” The Ivy League university ignored College Fix requests to provide the supposedly accurate figures.

Georgetown Law Center has gone a step further by quickly firing a veteran law professor who thought she was privately lamenting black student performance to a colleague in a Zoom call.

Like Penn Law, it has ignored a Fix request to provide hard figures, in this case LSAT scores for black students. Unlike its Ivy League peer, Georgetown Law has not claimed Sandra Sellers incorrectly characterized the academic performance of her black students.

The law school put another professor on administrative leave, apparently for not rebuking Sellers when she said “a lot” of her black students each semester have “lower” academic performance. Video shows David Batson murmuring “mmm-hmm” and nodding slightly as Sellers shared her “angst” that these students don’t perform better.

The Fix also asked media relations for both Georgetown University and Georgetown Law to explain how their actions against the professors, who teach negotiations law, comport with their contractual obligations to the faculty and each institution’s promises of academic freedom.

Georgetown Law is punishing faculty for accidentally shining a light on the lower admissions standards it has for black students, two lawyers said Thursday.

Hans Bader, a former Department of Education lawyer, said flatly that Georgetown had violated its own academic freedom policy even before firing Sellers, because it was “wrongly” investigating her for “telling the truth.”

In a legal analysis, he noted that the Wisconsin Supreme Court ruled against another Catholic university, Marquette, for breach of contract when it tried to fire a professor for criticizing a colleague’s classroom behavior. Georgetown’s academic freedom policy may be a legally binding contract, Bader said.

“Because of affirmative action, African-American law students good enough to get into Georgetown Law end up going to Harvard and Stanford instead,” tweeted Ted Frank, a high-profile appellate lawyer with the Hamilton Lincoln Law Institute.

“Georgetown Law has to dive deeper into the [applicant] pool to get a racially balanced class,” which creates “mismatch,” he continued. That’s the hypothesis that racial admissions preferences hurt minority students because they are not academically qualified for the environments they are entering.

It’s been 30 years since Georgetown Law Center’s first blowup over affirmative action. Frank noted a campaign to expel a student and confiscate copies of the student newspaper, where he had written an exposé of the law school’s substantial racial preferences.

24. In 1991, there was a similar controversy at GU Law. A student pointed out that the average black LSAT score was 36 (about 157 today) vs a 43 median. As a result only 1 black out of 60 graduated in the top third. Mismatch in action. https://t.co/AAS7EvGLWa

Dean wouldn’t let her resign, so he could fire her

Sellers and Batson continued talking after recording a course lecture together over Zoom, apparently unaware the the call was still recording and would be available to students.

The 43-second viral video, posted Wednesday night, starts with no context. “They were a bit [verbal pause] jumbled,” Sellers says, referring to the only black student in her class, according to a petition from the Black Law Students Association. “Yeah,” Batson says.

“That’s the best way I can put it. It’s like, OK, let me reason through that, what you just said,” Sellers recounts:

I hate to say this, I end up having this, you know, angst every semester that a lot of my lower ones are blacks. Happens almost every semester. And it’s like oh, come on. Get some really good ones, but there are also usually some that are just plain at the bottom, it drives me crazy. I feel bad.

Georgetown Law student Hassan Ahmad, who first posted the video snippet, tweeted that the class recording was “up and available to students in the class for weeks before being taken down.” He got the video from one of their students.

The BLSA quickly demanded Sellers’ “immediately termination … Not suspension. Not an investigation.” The group said the university only took down the recording after a student reported it.

It also demanded, among other things, “a public apology from Professor David Batson in his failure to adequately condemn Sellers’ statements,” and a review of Georgetown Law’s “subjective grading system” and Sellers’ own grading “to account for her admitted biases.”

Georgetown Law issued a statement less than three hours after Ahmad posted the snippet. Though Dean Bill Treanor called the professors’ conversation “abhorrent,” said he had referred them to the Office of Institutional Diversity, Equity & Affirmative Action, and promised “additional responses” from the law school, Ahmad deemed it “woefully inadequate.”

Treanor notified the community Thursday afternoon that he had fired Sellers for her “reprehensible” comments, hours after an NBC News report on the investigation of the as-yet unidentified professor.

The dean makes an odd admission: Sellers was already planning to resign, but he wouldn’t let her make the move.

After speaking to each professor and letting them add “any additional context,” the dean said he told Sellers he was firing her “effective immediately.” (Both faculty are adjuncts.) “During our conversation, she told me that she had intended to resign. As a result of my decision, Professor Sellers is no longer affiliated with Georgetown Law.”

Batson “will have no further involvement with the course in which the incident arose” while he’s under investigation by the Office of Diversity, Equity and Affirmative Action, Treanor wrote. He didn’t explicitly say Batson’s failure to rebuke Sellers – on a video call they believed was private – was grounds for the professor’s investigation, though the message says the incident reflects “bystander responsibility.”

Her ‘angst’ means she wants to ‘mark blacks higher, not lower’

“The only thing reprehensible here is the statement of the Dean throwing his faculty member under the bus instead of telling students unpleasant truths,” Frank retorted in a tweet.

Treanor’s disclosure that the law school would exclude “the input” of the professors on grading, to ensure their students are “fairly graded,” initially astonished the lawyer, who claimed “GU Law grading is blind and anonymous!”

Another user then posted Sellers’ syllabus, which says a quarter of the grade is based on “participation,” meaning at least that part can’t be graded anonymously. Frank corrected himself but noted that Sellers’ expressed “angst” about low grades shows she is “looking for ways to mark blacks higher, not lower.”

Bader, the former federal lawyer, told The Fix he “agree[s] in full” with Frank’s analysis of the situation.

While this investigation “would have been regarded as a threat to academic freedom” just a few years ago, “the political environment has changed, and so telling the truth is no longer permitted,” Bader said.

The professor, who has taught at Georgetown for nearly two decades, issued an apology letter cited by several media.

“I would never do anything to intentionally hurt my students or Georgetown Law and wish I could take back my words. Regardless of my intent, I have done irreparable harm and I am truly sorry for this,” Sellers wrote, according to The New York Times:

When this does not occur, it reflects shortcomings on my part, not just on the part of any single student. It is my responsibility to do all I can to correct this. My comments were the inarticulate reflection of long soul searching. I must do better to understand and address these issues.

Georgetown President John DiGioia affirmed the law school’s quick actions against Sellers and Batson in an email to the university community Friday, shared with The Fix. It provided no specific policy basis for the sanctions.

Echoing Dean Treanor, the president interpreted Sellers’ statements and Batson’s silence as revealing their bias in “academic evaluation of black students,” even though Sellers said she “feel[s] bad” that so many of her black students don’t perform better.

Unlike the dean, DiGioia didn’t mention that the law school fired Sellers for a private observation. He simply said one of the two “is no longer affiliated” with Georgetown.

“Dean Treanor’s decisive actions were essential and consistent with the ethos and ideals we strive to sustain at Georgetown,” he wrote: “There is no more important aspect of our work than to create and sustain a culture of belonging, inclusion, and respect, and there is more work we must do to strengthen our community.”

The statement (below) has not been posted online as of Friday afternoon. 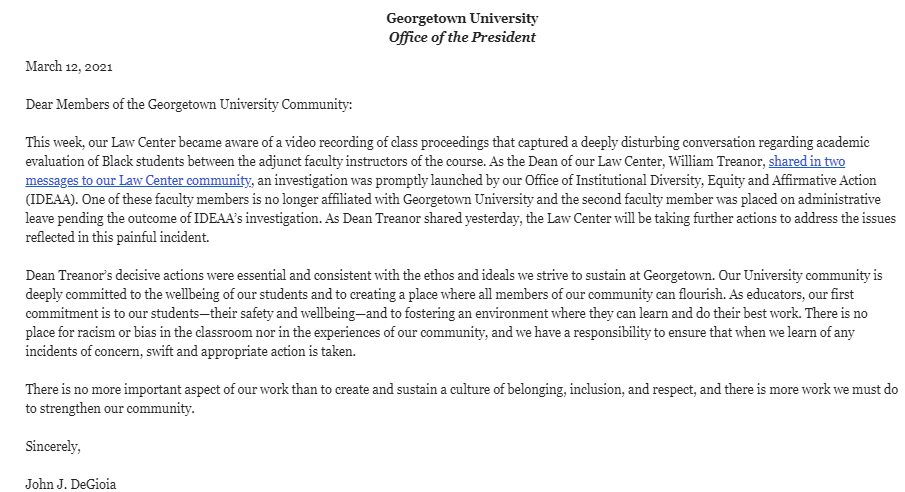 ‘Other professors learn to keep their mouths shut, which is the point’

In his subsequent published analysis, Bader said Georgetown Law’s incorporation of American Association of University Professors principles meant it could be legally bound to them.

More than 20 years before the Marquette breach-of-contract case, a court barred a university from punishing a professor for offensive classroom analogies, citing the “AAUP collective bargaining agreement guaranteeing academic freedom.”

Bader noted his personal interest: Harvard Law admitted him despite “lower-than average credentials,” he suspects because he “pledged to go into public-interest law afterwards.”

“I was less prepared than most of my classmates and occasionally had to struggle to keep up with my classmates,” Bader wrote: “This did not mean I flunked out of school: I later passed the bar exam and played a key role in litigating three Supreme Court cases dealing with federalism and the constitutional separation of powers.”

Sellers’ violation was simply noticing well-known dynamics in admissions at second-tier law schools such as Georgetown, according to Frank, who says his appeals court record is 20-4.

“Because of mismatch, African-Americans attending Georgetown Law are less qualified than average students, and perform worse in school,” he tweeted. Sellers was simply “recorded Noticing,” and nobody claimed her statements were false.

“Other professors learn to keep their mouths shut, which is the point,” Frank continued: “Students and policymakers never hear that affirmative action causes mismatch and all sorts of downstream problems.”