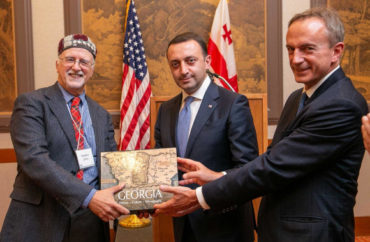 The Davis Center for Russian and Eurasian Studies at Harvard University this week announced a joint agreement with the European nation of Georgia to create a new joint Georgian studies program.

The new program will be funded by a $2.3 million sponsored “research award” from the Ministry of Education and Science of Georgia to support “research and scholarly exchange, teaching, and outreach,” according to the Davis Center announcement.

The program will be led by Stephen F. Jones, a professor at Mount Holyoke College and at Georgia’s Ilia State University.

“This is a first,” said Jones in the school’s press release announcing the agreement. “Now scholars of Georgia and the South Caucasus have an academic center at Harvard, where they can exchange ideas, pursue research, and collaborate with Georgian colleagues. Its establishment here at Harvard benefits both Georgia and the United States.”

The program is intended to expand the school’s knowledge of Georgian history and “stimulate research into Georgia’s culture, literature, politics, and economics by young American scholars and students.”

“The program is designed to promote collaboration, and will fund Georgian scholars and their research projects,” the announcement said. “This will include scholarly exchanges and visits to the Harvard campus, and joint projects between the Davis Center and Georgian institutions of higher education.”

“Colleges and universities, lured in by generous funding, have willfully ignored breaches of intellectual freedom and intellectual property,” said policy director at the National Association of Scholars Rachelle Peterson to The College Fix last year.

Courses on Georgia, including Georgian language classes, will be offered in history and the social sciences every year starting in the spring semester of 2022.