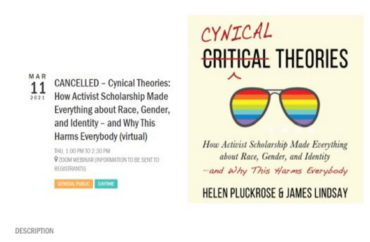 Lindsay is co-author of the 2020 book “Cynical Theories: How Activist Scholarship Made Everything about Race, Gender, and Identity―and Why This Harms Everybody,” and founder of New Discourses, a website that takes on trending educational, cultural and social justice issues with a critical eye.

Lindsay, who holds a PhD in mathematics, is also a member of the “grievance studies” publishing project. He was slated to discuss “Cynical Theories” at the Harvard Business School Club event, set for March 11. But on Tuesday night, he tweeted it had been cancelled.

“Lmao! I had been invited to speak for the Harvard Business School Club of New York about Cynical Theories, and because someone was upset that I exist, they changed the moderator to their chief equity officer, Hemali Dassani, and then, when I didn’t back down, cancelled the event,” he tweeted.

Lmao! I had been invited to speak for the Harvard Business School Club of New York about Cynical Theories, and because someone was upset that I exist, they changed the moderator to their chief equity officer, Hemali Dassani, and then, when I didn't back down, cancelled the event. pic.twitter.com/hOvGQE4gFK

In an email Wednesday to The College Fix, the club’s Executive Director Eunice Suh said it was decided the event did not align with the club’s goals.

“Although we welcome vigorous debate and different points of view, we have decided not to offer this program since it is not consistent with the objectives of our organization,” Suh said.

“Cynical Theories” is described by its authors as a book that warns of “the unchecked proliferation” of “anti-Enlightenment beliefs”:

Have you heard that language is violence and that science is sexist? Have you read that certain people shouldn’t practice yoga or cook Chinese food? Or been told that being obese is healthy, that there is no such thing as biological sex, or that only white people can be racist?

…Today this dogma is recognizable as much by its effects, such as cancel culture and social-media dogpiles, as by its tenets, which are all too often embraced as axiomatic in mainstream media: knowledge is a social construct; science and reason are tools of oppression; all human interactions are sites of oppressive power play; and language is dangerous.

Only through a proper understanding of the evolution of these ideas … can those who value science, reason, and consistently liberal ethics successfully challenge this harmful and authoritarian orthodoxy—in the academy, in culture, and beyond.

As for his cancellation, Lindsay told The College Fix in a direct message Wednesday that the original moderator was slated to be Jean-Louis Maserati, who is open to Lindsay’s arguments, but some were concerned Maserati might let Lindsay’s ideas go unchallenged.

In a compromise, Dassani was tapped to moderate. She chairs the club’s racial equity task force. In response, Lindsay said he told organizers he expected the event may become “hostile.”

“They cancelled the event a few days later without any real explanation, saying that while they support difference of opinion and debate, they no longer think this event would be the right fit. I asked for more of an explanation, and, though they replied, I wasn’t given any more details,” he told The Fix.