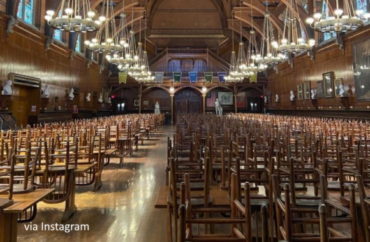 The freshman dining hall and other high-traffic areas at Harvard University will likely get a redesign after a task force determined their “visual culture is dominated by homogenous portraiture of white men.”

The recommendation was made by the Task Force on Visual Culture and Signage, which claims in its report that the “exclusion embedded in the current visual culture of these spaces perpetuates a too-narrow understanding of our institution’s past, present, and future.”

That recommendation is among several listed within the group’s 23-page report, as quoted by both the Harvard Crimson and Harvard Magazine on Monday.

In addition to a faculty room and the Graduate School of Arts and Sciences student center in Lehman Hall, the freshman Annenberg Hall dining area was identified in the report as a popular campus area that needs visual changes.

“Of the 23 portraits on the walls of Annenberg, for example, none depict women and all but three are of white men,” the outlets reported.

The Faculty of Arts and Sciences task force was formed in September 2020 “to advance racial justice in our community,” according to its official launch statement.

“This Task Force will take up the important conversation of how we foster a more inclusive visual culture across the FAS, connecting our past with the promise of our future,” according to the statement.

Of the 21 members listed on the task force, the majority are administrators.

“The task force solicited community input through a listening tour, a survey, a series of focus groups, and an email account to which people could send concerns and ideas,” Harvard Magazine reports.

“Task force members worked alongside other campus teams ‘grappling constructively with Harvard’s past,’ the report added, including the University’s Committee to Articulate Principles on Renaming and the Presidential Initiative on Harvard and the Legacy of Slavery.”

For example, in 2018, campus leaders altered the lyrics of the school’s alma mater due to concerns the word “stock” is problematic. The lyrics “till the stock of the Puritans die” was changed to “till the stars in the firmament die.”

Harvard in 2018 also changed its seal due to concerns it was racist.

Then, in 2019, a portrait of former Harvard President Abbott Lowell was removed from a campus building because of his various anti-Semitic, homophobic and racist policies.

MORE: Harvard to explore renaming almost everything named for historical figures on campus