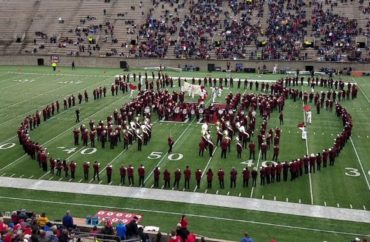 Alumni joked about censoring what they could say

Columbia University shut down its marching band’s annual “Orgo Night” tradition because it made some students feel “unsafe” and “triggered.” Stanford University wrenched control of its band away from students because of its “systemic cultural problem,” sparking cries of benevolent sexism since female students were about to take the reins of the organization.

Black, Hispanic and Asian members of a Georgia high school marching band got in trouble for spelling out “COON” on the field.

More than 70 members left the room at its own centennial party Saturday, The Harvard Crimson reports. What offended them so much?

Jokes about the band’s new sexual harassment policy, “which provides band members with a formal disclosure system to report incidences of sexual misconduct”:

At the banquet, former band member Richard “Rich” D. Horn ’72 began his speech with a joke about the group’s decision to implement the policy, which undergraduates distributed to alumni ahead of the reunion. As Horn continued to speak, roughly 75 attendees left the room, according to an emailed statement by the band’s senior staff. Many of those who walked out did not return for the remainder of the event.

It’s not exactly clear what Horn said, but he wasn’t alone: A previous alumni speaker made a similar joke. Both apologized after. Horn grovelled profusely in an email that he was not questioning the policy but that “I ought to have known better. Hopefully, I will do better in any future occasion.”

Camaron O’Connor Wynn, Harvard Band Foundation president, wrote in an email that the offending alumni were “brief (not primary) speakers” and their “[a]ttempts at humor … touched on the Band’s sexual misconduct policy as a policy — in the sense of the necessity of censoring one’s own speech to fit with the new policy.”

The band’s intolerance for jokes shows that “Harvard is a new Puritan sect,” a former Harvard band member and leader told The College Fix in an email, explaining in part why he did not attend the college reunion or band’s centennial this weekend.

The former member suggested that the band had internalized the administration controls, including prior review of routines, that had been imposed on the band decades earlier. Prior review “seemed legitimate insofar as we were guests of Harvard Athletics” and the band had a reputation for “raw content” before then.

Another band alumnus, who said he was in the room during the walkout, emailed The Fix a week after the incident to question the band leadership for not reviewing the material of the alumni speaker.

“I was perturbed” because leadership had to have known the speaker gave “a snarky speech five years earlier” at a related celebration. “They then walked out on their own chosen speaker, likely creating ill will among several hundred alumni guests.”

The alum, who told The Fix he graduated in the 1980s, said the offended band members also “shouted less-than-pleasantries at the speaker while others extended the middle-finger-of-welcome.”

Senior staff for the band told the Crimson that some alumni wrote in a chat that the policy stood “in contrast to the spirit of the band that they had known in their time”:

“[M]uch has changed even within the past decade,” they wrote. “The jokes that were made may express discomfort in confronting this change; older alumni may have been surprised to see just how much the structure and nature of the Band have changed over time.”

UPDATE: Another band alumnus contacted The Fix after this post was published to share his thoughts and more detail on what happened during the walkout. His comments have been added.