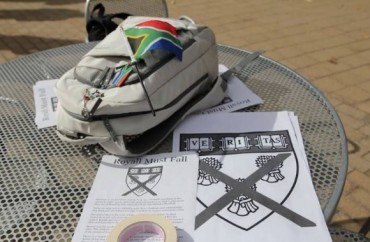 So most people aren’t buying that Harvard “hate crime” in which strips of black tape were stuck over pictures of black professors hanging inside Harvard Law School’s halls.

The vandalism came soon after a Harvard campus protest in solidarity with those at Mizzou and Yale.

The Daily Caller was one of the first on the scene to note that the “hate crime” had a “particularly noteworthy red flag.”

“The black tape used to deface the portraits appears to be identical to tape that was recently used by activists affiliated with the Royall Must Fall group protesting against HLS’s current seal (which is taken from the coat of arms of the slaveholding family that endowed HLS’s first professorship),” the Caller reported.

Over at Powerline, John Hinderaker also has his doubts:

I won’t try to summarize the evidence; suffice it to say that it is highly persuasive. I will merely note that not all of the black professors’ pictures were defaced: the photo of Lani Guinier, the most radical of Harvard’s black law professors, was untouched.

Oh, one more thing: black protesters did exactly the same thing–placed tape over the portraits of black law professors–a year ago. I suspect that the authors of Royall Asses have understated the probability of this event being a hoax.

But the damage has been done.

The Harvard Crimson reported late Sunday that “on the heels of an incident of racially-charged vandalism on campus, Harvard Law School Dean Martha L. Minow has appointed a committee to reconsider the school’s controversial seal—the crest of the former slaveholding Royall family that endowed Harvard’s first law professorship in the 19th century.”

“The school’s seal, which features three sheaves of wheat under an emblem of ‘Veritas,’ came under scrutiny earlier this year when a group of students, calling themselves ‘Royall Must Fall,’ demanded its removal in light of its connection to slavery,” the Crimson added. “Now, it seems their activism is bearing fruit.”

Yeah, thanks to a little (ahem, cough cough) racially-charged vandalism.