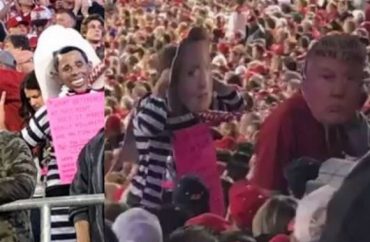 They say a picture is worth 1,000 words. But there’s another expression: One picture doesn’t tell the whole story.

And so it is that we come to the cautionary tale of a photo that exploded on the Twitterverse and made national headlines over the weekend decrying what appears to be a Halloween costume of President Barack Obama in a striped jailhouse outfit and a noose around the neck.

At the @UWBadgers game and there is a man with a mask of President Obama and a noose. This is racism, why was this allowed into the stadium? pic.twitter.com/zKEqhdDYny

But UW-Madison watchdogs, namely University of Wisconsin law professor Ann Althouse, as well as Daniel Dropik, a UW-Madison student and active free speech advocate, have pointed out how it was not a straight-up “Obama lynched” costume.

Althouse writes on her blog:

But take a closer look at that tweeted picture. See the hand with the peace sign? The person is facing away from the camera. The Obama mask is on the back of the head. We see the shape of a larger mask in front. And if you look closely at the pink sign, the words are Hillary Clinton’s: “What difference at this point does it make?” I assume the mask on the front-side of the head depicts Hillary Clinton. And yes, poking around, I see this view of the front of the person. It is a big Hillary Clinton face, and there’s another person with a big Trump mask and he’s holding the other end of the rope. The rope-holding Trump is walking the noosed Hillary in the manner of Pozzo leading Lucky in Samuel Beckett’s “Waiting for Godot” …

I think the political theater in the football stadium was intended to express Hillary’s criminality and/or Trump’s use of the idea that Hillary is a criminal. It could simply be that Hillary and Trump are bound together in a horrible drama that’s scaring us, Halloween style.

And Dropik, on his personal blog, has posted two videos showing a much clearer video of the Hillary/Trump aspect of the costume, noting the videos corroborate Althouse’s analysis:

Finding out the true nature of the costume, lends it much more toward a political expression, rather than containing a racially focused message. If it were a costume made for the express purpose of racial intimidation, it would be rather ambiguous and unclear. Was the noose meant for Hillary or Obama or both? Was it a symbol of a violent act, or is it a symbol conveying a more abstract “political death”? …

What disturbs me the most is the false reporting on the issue. Is it just poor investigative skills, accidental reporting, proclivity towards sensationalism, or a calculated motive to manipulate a racial narrative? …

Considering the costume, and it’s construction with Hillary, Obama and Trump, it clearly puts it within a political statement context much more than a “true threat” directed at the President. Also, if the person was wearing the costume for other Halloween activities, it completely changes questions of intent.

Ultimately I think what we have here could easily be classifies as a crude political hyperbole, which has been deemed protected …

Regardless of the context of the situation, predictably, UW-Madison Chancellor Rebecca Blank on Monday released a statement that did not address the totality of the situation.

“The hateful message [the costume] sends to our entire community is contrary to our deeply held values – civility, respect, and the celebration of diversity. Immediately upon learning of the costume this individual was wearing, stadium staff spoke with him and asked him to remove the noose from his costume. The individual complied and was allowed to stay in the stadium,” Blank stated.

“Some have asked why the individual was not ejected. Once the noose was removed, the decision was made that the remainder of the costume fell within the stadium’s costume policies,” she continued. “This was consistent with our handling of other instances of individuals wearing clothing containing offensive language. As offensive as this costume was, I believe our university must resist the desire to outlaw forms of speech and political dissent with which we disagree.”