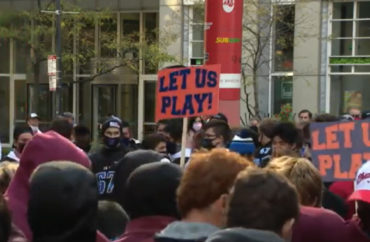 Only state left in the Midwest without football

The state of Illinois isn’t exactly the most libertarian, freedom-loving state in the union. But a restriction on youth sports has stirred up an activist spirit in the Land of Lincoln.

Democratic Governor J.B. Pritzker reiterated his ban on school contact sports this fall, after citizens pressed him to reconsider his decision in the face of the Big Ten’s decision to move forward with a football season.

Pritzker banned most youth sports in July. Currently, only high school cross country, golf and tennis are allowed by the state while elementary students can play baseball, softball, golf and cross-country. Meanwhile, Pritzker’s daughter continues to travel across the country competing in equestrian competitions.

On September 13, student athletes rallied together, while wearing masks, to advocate for a return of contact sports in the state. Adults younger than 20-years-old represents fewer than 15 percent of all positive cases, according to the state’s statistics.

“I’m advocating for all the hardworking athletes who depend on scholarships to pay for their college,” one student said at the rally, which was covered by CBS 2.

Parents pushed back against the restrictions as well, including at another rally on September 17.

“Our kids are suffering, they need to go back to school. They’re lonely. They can’t go back to sports, they can’t do marching band,” high school parent Diane Devito told WGN.

It’s not just students, either. A high school football coach, who has won multiple state championships, sharply criticized the governor of Illinois for his stance on high school sports.

Loyola Academy coach John Holecek, who is also a former NFL linebacker, penned a commentary recently in the Chicago Tribune. Illinois is now the only state in the Midwest that is not playing high school football.

Holecek took Pritzker to task for holding press conferences but not listening to his constituents.

I’d like to ask Gov. J.B. Pritzker to take a step back and evaluate high school sports from a different perspective. Get out from behind the podium and come visit a high school football practice. Speak to the kids whose lives are affected by your decision. Meet their parents. Speak with the many caring adults who are waiting to go beyond their duties, providing youth guidance and leadership many kids do not find at home or online.

Visit with mental health professionals and discuss the major uptick in teenage depression, loneliness and anxiety, and the reasons behind it.

I have a sinking feeling here that politicians are putting their own career ambitions over the best interests of the people of Illinois. Eliminating an important part of essential adolescent formation will have long-term consequences for impacted families.

MORE: Justice Department sides with girls fighting to keep boys out of their sports