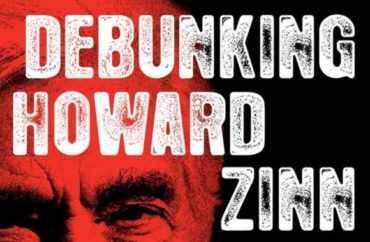 The following excerpt is adapted from “Debunking Howard Zinn: Exposing the Fake History That Turned a Generation against America,” a recently published book by scholar Mary Grabar.

Howard Zinn rode to fame and fortune on the “untold story” of Christopher Columbus—a shocking tale of severed hands, raped women, and gentle, enslaved people worked to death to slake the white Europeans’ lust for gold.

Today, that story is anything but untold. Zinn’s narrative about the genocidal discoverer of America has captured our education system and popular culture. The defacement of statues of Columbus with red paint had already become an annual ritual in many places. 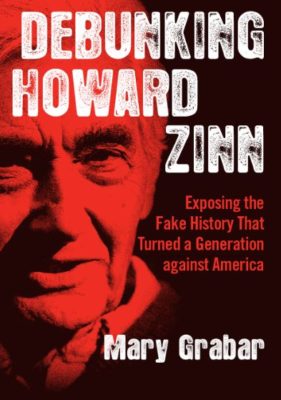 Many articles reporting on this trend cited Howard Zinn’s role in the change in attitude.

Stanford anthropology Professor Carol Delaney, who was quoted in a Courthouse News Service article to provide a counter-narrative, informed reporters that Columbus acted on his Christian faith and instructed his crew to treat the native people with kindness. But such inconvenient facts are inevitably drowned out by the Columbus-hate that Howard Zinn has succeeded in spreading.

Presumably extrapolating from the “many volumes” he had read, Zinn found the inspiration for the dramatic opening sentences of “A People’s History of the United States”:

“Arawak men and women, naked, tawny, and full of wonder, emerged from their villages onto the island’s beaches and swam out to get a closer look at the strange big boat. When Columbus and his sailors came ashore, carrying swords, speaking oddly, the Arawaks ran to greet them, brought them food, water, gifts. He later wrote of this in his log: ‘They . . . brought us parrots and balls of cotton, and spears and many other things, which they exchanged for the glass beads and hawks’ bells. They willingly traded everything they owned. . . . ’”

The quoted passage from Columbus’s log continues with Columbus’s description of the Arawaks. They are “well-built” and handsomely featured. Having never seen iron, they accidentally cut themselves on the Europeans’ swords when they touch them. The passage ends with Columbus’s now infamous words: “They have no iron. Their spears are made out of cane. . . . They would make fine servants. . . . With fifty men we could subjugate them all and make them do whatever we want.”

The ellipses in this passage are Zinn’s, not mine. Those omissions are essential to Zinn’s dishonest retelling of the Columbus story. By leaving crucial words out of the quotation, Zinn makes Columbus say something very different from what he actually said.

It’s unlikely that he even read as much of “Columbus’s journals” or the works of “Las Casas, the great eyewitness” as he claimed. The truth is that Zinn’s description of Columbus’s first encounter with the American Indians is lifted from “Columbus: His Enterprise: Exploding the Myth,” a book for high school students that Zinn’s friend and fellow anti-Vietnam War activist, Hans Koning, first published in 1976.

Zinn perpetuates Koning’s smears. In Koning’s telling and in Zinn’s, Columbus set out to enslave a uniformly gentle people for the sole purpose of enriching himself with gold. In fact, that is far from the truth. European efforts to find a sea route to Asia had been going on for hundreds of years. As William and Carla Phillips point out in “The Worlds of Christopher Columbus,” Columbus’s voyages of discovery were a continuation of Europeans’ ventures of sailing to Asia—at first, around Africa—that had begun in 1291. For centuries before Columbus, Portuguese and Spanish explorers had also ventured farther and farther out into the Atlantic Ocean.

Thus, Columbus’s mission was multi-faceted and inspired by several different motivations: “to reach the East Indies, so as to take Islam in the rear, and to effect an alliance with the Great Khan—a mythical personage who was believed to be the sovereign of all that region, and favorable to the Christian religion—and finally . . . to diffuse Christianity throughout that unknown continent and trade with the traditional sources of gold and spices.”

Desires to find new lands for more resources and to escape enemies and persecution are not impulses unique to Europeans. The natives of North America “in prehistoric times” themselves came from Asia and “crossed the land bridge across the Bering Strait to the lands of the Western Hemisphere.”

When he encountered naked natives instead of the Asian merchants he was expecting, Columbus did not jump to thoughts of working them to death for gold as Zinn, following Koning, suggests. For example, in his log entry for October 12, 1492, Columbus wrote, “I warned my men to take nothing from the people without giving something in exchange”—a passage left out by both Koning and Zinn.

But Zinn’s most crucial omissions are in the passage from Columbus’s log that he quotes in the very first paragraph of his People’s History. There he uses ellipses to cover up the fact that he has left out enough of Columbus’s words to deceive his readers about what the discoverer of America actually meant. The omission right before “They would make fine servants” is particularly dishonest. Here’s the nub of what Zinn left out: “I saw some who bore marks of wounds on their bodies, and I made signs to them to ask how this came about, and they indicated to me that people came from other islands, which are near, and wished to capture them, and they defended themselves. And I believed and still believe that they come here from the mainland to take them for slaves.”

In his translation of Columbus’s log, Robert Fuson discusses the context that Zinn deliberately left out:

“The cultural unity of the Taino [the name for this particular tribe, which Zinn labels “Arawaks”] greatly impressed Columbus…. Those who see Columbus as the founder of slavery in the New World are grossly in error. This thought occurred to [Samuel Eliot] Morison (and many others), who misinterpreted a statement made by Columbus on the first day in America, when he said, ‘They (the Indians) ought to be good servants.’ In fact, Columbus offered this observation in explanation of an earlier comment he had made, theorizing that people from the mainland came to the islands to capture these Indians as slaves because they were so docile and obliging.”

Zinn’s next ellipsis between “They would make fine servants” and “With fifty men we could subjugate them all and make them do whatever we want” covers for Zinn’s dishonest pretense that the second statement has anything at all to do with the first. The sentences that Zinn joins here are not only not in the same paragraph—as he dishonestly pretends by printing them that way on the very first page of A People’s History— but they’re not even in the same entry of Columbus’s log. In fact, they’re from two days apart.

Zinn’s highly selective quotations from Columbus’s log are designed to give the impression that Columbus had no concern for the Indians’ spiritual or physical well-being—that the explorer was motivated only by a “frenzy for money.”

But literally the explorer’s first concern—the hope that he expressed in the initial comment about the natives in his log—was for the Indians’ freedom and their eternal salvation: “I want the natives to develop a friendly attitude toward us because I know that they are a people who can be made free and converted to our Holy Faith more by love than by force.”

Zinn just entirely omits the passage in which Columbus expresses his respect and concern for the Indians. Zinn also suppresses—and, where he doesn’t suppress, downplays— the evidence from even the sympathetic Las Casas that the Indians could be violent and cruel. Zinn has to admit that they were “not completely peaceful, because they do battle from time to time with other tribes.” But, like Koning, he is eager to explain their violent behavior away, arguing, “but their casualties seem small, and they fight when they are individually moved to do so because of some grievance, not on the orders of captains or kings.”

In Zinn’s telling, the Arawaks—or black slaves, or Cherokees, or New York Irish, or whoever—must always be persecuted innocents and the condemnation of their sufferings must be absolute. The officially oppressed cannot be blamed even for any crimes they themselves commit, which are inevitably the fault of their oppressors.

According to Zinn, there’s no such thing as objective history, anyway: “the historian’s distortion is more than technical, it is ideological; it is released into a world of contending interests, where any chosen emphasis supports (whether the historian means to or not) some kind of interest, whether economic or political or racial or national or sexual.”

Once ideology has become a moral virtue, Zinn can discount standards of scholarship—such as those of the American Historical Association—as having to do with nothing more important than “technical problems of excellence”—standards of no importance compared to his kind of history, which consists in forging “tools for contending social classes, races, nations.”

Thus it would seem that the noble political purpose behind Zinn’s history justifies him in omitting facts that are inconvenient for his Columbus-bad-Indians-good narrative.