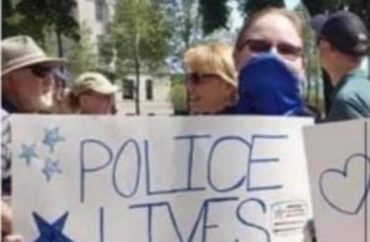 Marilyn Lambert believes #PoliceLivesMatter, and she isn’t afraid to say it publicly.

For that perceived sin, the incoming student government president at the College of Lake County is facing accusations of racism and a campaign to force her to resign.

The Young Americans for Freedom chapter at the Illinois community college shared social media criticizing Lambert for participating in a pro-police march.

The image also targets two other incoming officers in the Student Government Association, Rhiannon Graham and Madison Hartman, for using “the n word openly” on campus and “tr[ying] to ruin my life to get marilyn elected.” They were also accused of homophobia and transphobia.

They all must resign so that the college can be “a safe place for all students.”

Another image of Lambert from the march, holding a #PoliceLivesMatter sign, is overlaid with this text: “the amount of racism, micro aggressions [sic], homophobia/transphoba [sic] i have heard and endured at the hands of marilyn, and maj [sic] of the SGA executive board is disgusting.”

It was posted by SGA senator Leila Manthi, a losing candidate for president who was also featured by the college in a recent press release on Juneteenth, the holiday that celebrates the freeing of all slaves after the Civil War. In a Facebook post, Manthi also implied Lambert’s election victory was rigged.

Manthi posted two of the same images in a public Instagram story as well. While it’s not clear how Lambert and the other incoming officers figure into Manthi’s claims, the student apparently accuses them of racism toward her throughout the 2019-2020 academic year. Manthi asked supporters to repost her accusations and tag the college and SGA on Instagram. One image shows the college responded:

Please know that we have been reading your important messages and that today, we will be passing them along to college leadership. We look forward to continuing the dialogue further this week.

The College Fix has asked college media relations whether Lambert is under investigation for any alleged wrongdoing toward Manthi, and if so, on what grounds.

Keep going and you might ‘get hit with a defamation lawsuit!’

The YAF chapter said Sunday night said Lambert had been “harassed and called very nasty, untrue things” for attending the unidentified march. (It may have been a “Back the Blue” rally an hour away from the college.)

“This is not the behavior that should be shown by CLC students, especially when they are a part of CLC leadership (one even being the student government president himself),” the group said, apparently referring to Lambert’s predecessor. (The Fix could not find this person’s identity, as the SGA does not appear to have its own website.)

“Just because someone disagrees with you on a policy issue does not mean you have the right to resort to personal attacks,” the chapter said: “Their goal is not to stop racism, but to stop productive speech and stifle any dissenting opinion.” It warned those harassing Lambert that they may “get hit with a defamation lawsuit!”

A spokesperson for the YAF chapter told The Fix in an email that “some disgruntled militant leftists” had launched the social media campaign against Lambert, who also provoked their ire by refusing to “denounce” YAF, unlike her predecessors. Manthi has been “very active in posting about Marilyn and this march,” he said.

While the spokesperson wasn’t aware of a petition seeking Lambert’s removal, and said the college administration has been “behind her against these attacks,” Lambert is concerned by the growing “chorus of far-leftists demanding for the college to take action against” her.

The spokesperson didn’t know the details behind the allegations against Graham and Hartman, the other incoming officers, whom he knows personally. He said “it does not seem likely that what was posted about them was in any way, shape, or form true.”