Similar to singling out the media for taxation (which is unconstitutional)

Even more surprising than bipartisanship in Washington is an unambiguously good ruling from the 9th U.S. Circuit Court of Appeals.

Three years after The Koala sued the University of California-San Diego for defunding it based on its offensive content – a court battle it quickly lost – the appeals court reinstated the satirical student newspaper’s First Amendment lawsuit.

The university didn’t lose on narrow grounds. The 9th Circuit reversed the trial court’s order, vacated its judgment and remanded the case “for further proceedings consistent with this opinion.”

The Koala isn’t just a campus version of The Onion. It’s intentionally provocative and works hard to offend, publishing profanity, pornography and politically incorrect jokes to the extreme, like a print version of the South Park movie. It referred to Chancellor Pradeep Khosla as “Ballsdeep Pradeep,” for example.

The student government’s defunding of all student media in 2015 – an attempt to constitutionally remove support from The Koala – wasn’t even its first try. It did the same in 2010, the end result of a campaign led by the Black Student Union.

The main difference in 2015, which provoked the lawsuit: Hours before the student government vote, administrators publicly condemned The Koala as “profoundly repugnant, repulsive, attacking and cruel.” The UCSD statement was read at the meeting right before the vote.

What had so offended administrators? The Koala had recently made fun of “safe spaces” in unmistakable Koala fashion. 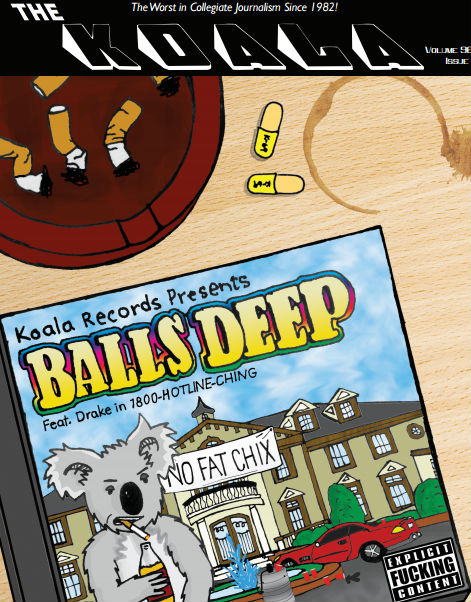 ‘The government may not withhold benefits for a censorious purpose’

In a somewhat surprising move, given the national organization’s refusal to defend the right to offensive speech, the local ACLU represented the newspaper in court.

The trial ruling against The Koala brought together other free-speech advocacy groups to demand reversal by the 9th Circuit, saying it could even endanger the free exercise of religion on state-funded campuses. The Foundation for Individual Rights in Education warned the court’s rationale could be used to “gut civil right law,” and several media organizations also pressed for reversal.

The 9th Circuit bought their arguments, which were actually its own arguments from a previous ruling.

Days after The Koala filed suit, the famously left-leaning appeals court ruled that public universities can’t retaliate against disfavored speech by cutting funding to student groups. (I predicted at the time that the ruling against Arizona State had probably guaranteed a win for The Koala, but it took three years.)

The appeals court allowed the newspaper’s constitutional claims to move forward in trial court, in an opinion filled with references to its Arizona State ruling.

The newspaper had argued UCSD violated the free press and free speech clauses of the First Amendment and committed First Amendment retaliation with the defunding vote, even though it was facially neutral.

The Koala vs. UCSD Administrators: “The Trial of the Fucking Century” https://t.co/KLmwigAIej pic.twitter.com/g0oGMAZiGP

Legal nerds will be interested to read the 9th Circuit’s full analysis, which starts with a boring but important finding: The 11th Amendment doesn’t bar “prospective injunctive relief.”

UCSD tried to get the suit thrown out by claiming it violated the sovereign immunity doctrine (the California institution didn’t consent to be sued in federal court). The appeals court rebuked the trial judge for refusing to accept the newspaper’s claim that it was simply asking for renewed eligibility to apply for funding:

The outcome of this lawsuit will not increase or decrease the overall financial burden on the state [of California]; it will affect only which [registered student organizations] may apply for student activity fees and, potentially, how the total student activity fund is distributed.

As for the “Media Act” provision that defunded all student media, the panel of judges cited the Supreme Court’s disapproval of taxation that singles out the media.

While UCSD claimed it was simply withholding a “subsidy” under its lawful discretion, the 9th Circuit noted that “other Supreme Court case law teaches that the government can violate the First Amendment by withholding benefits for a censorious purpose”:

We see no reason why the rule articulated in the Free Speech cases cited above—that the government may not withhold benefits for a censorious purpose—should not apply when the state singles out and burdens the press by revoking a subsidy, particularly where, as here, the record includes unusually compelling allegations that the government acted with discriminatory intent.

The university also argued that it had the right to close either the full “limited public forum” it had created (the student activity fund) or just a “portion” of it (student media funding). The Koala insisted that the media “portion” was not its own forum but rather an “administrative device” for distributing funds, meaning it had been denied access to the full forum.

The 9th Circuit agreed with the newspaper, finding “no UCSD policy statement that separately establishes the category of media funds,” even if the student government apportions the funds into several categories that “facilitate the grant approval process.”

It mocked the university’s double-minded reasoning:

[W]e know of no case in which the government has been allowed to define a forum one way at its inception, then redefine it in response to speech it deems offensive and close only the portion of the forum where that speech occurs. If the government could define the contours of a limited public forum one way at is inception, then redefine its scope in response to speech it disfavors, the government would be free to zero-in and selectively silence any voice or perspective. UCSD’s newly defined forum, proposed ex post during contentious litigation around sensitive cultural and political topics, runs the real risk of silencing divergent views by slicing off just enough of an existing forum (the student activity fund) to isolate offensive speech, then closing the redefined forum (the Media Funds category of the student activity fund) under the guise of content neutrality.

The panel of judges favorably cited a friend-of-the-court brief by the Student Press Law Center that argued a university could also defund religious student groups by applying the same “portion” rationale.

The 9th Circuit was also unpersuaded by UCSD’s claim that its motive is “irrelevant” when it approves a “content-neutral rule of general applicability.”

The Media Act specifically banned “all media organizations” from getting funding, discriminating against them based on their identity. The Koala also claimed at least one other student organization is still getting funding for its print media, showing UCSD discrimination against The Koala specifically. (The appeals court has to take all its claims as true at this point.)

The panel of judges noted they were presented a similar scenario in the Arizona State case, where a student lobbying organization lost its only source of funding after advocating for a ballot measure the university opposed. The 9th Circuit approved the group’s First Amendment retaliation claim.

The Koala successfully stated the same claim by arguing its “Dangerous Spaces” article, which mocked safe spaces, was protected speech; the Media Act forced it to stop printing; and it thus lost the “more effective means of communicating with its audience” (print).

The timing of the defunding vote – two days after “Dangerous Spaces” was published – also suggested the article was the “motivating factor,” at least at this stage of litigation. UCSD didn’t help itself here: A top administrator allegedly urged the student government to find other ways to fund non-Koala media (“the good ones”).

The Foundation for Individual Rights in Education was only slightly less mocking than the 9th Circuit toward UCSD.

“Points for creativity” in the limited-public-forum switcheroo, “but UCSD should have listened to FIRE way back in 2015 when we told them that shutting down all student media outlets just to shut up The Koala was unconstitutional,” said Marieke Tuthill Beck-Coon, director of litigation.

“The Ninth Circuit’s landmark ruling is a powerful reminder to public university administrators nationwide: You can’t silence students just because you don’t like their sense of humor,” she continued.

#Tritons4Tara: This A.S Candidate Wore Blackface, and You Won’t Believe What Happened Next! https://t.co/rO1GJekht6 pic.twitter.com/yFkCYGaMXv