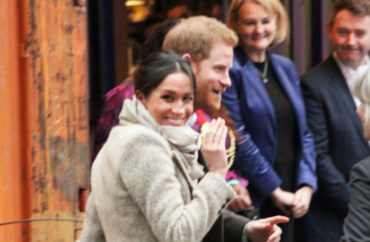 A Columbia University professor who made anti-Semitic and anti-Israel posts on Facebook has walled off his page from the public after drawing scrutiny from a national alumni network of pro-Israel activists.

Hamid Dabashi was still posting publicly on Friday when The College Fix first reviewed his page, which had gone dark by Monday night. Several Facebook posts remain excerpted and linked on his Twitter page, which remains live as of Tuesday night, though they lead to dead links.

Alums for Campus Fairness, which works with pro-Israel advocacy group StandWithUs to fight anti-Semitism on college campuses, is calling for administrative action against the tenured professor of Iranian studies, who was born in Iran.

The Columbia administration has yet to make a statement about the controversy surrounding Dabashi or respond to Fix queries to media relations and the offices of the president and executive vice president.

The Columbia Daily Spectator has also not reported on Dabashi’s posts or the campaign to remove him from teaching, though it continues to publish during summer break.

Dabashi’s Facebook page, which highlights his affiliation with Columbia, denounced Zionists as “laughing hyaenas [sic]” for opposing the Iran nuclear deal, recently abandoned by President Trump, in a May 8 post.

“[I]n their stupidity and ignorance they think they are fighting with the Iranian government … they are picking a fight with the Iranian people,” who are the “power of resistance to tyranny and imperialism,” he wrote.

Hours earlier, blaming the world’s evils on Israel, Dabashi wrote: “Every dirty treacherous ugly and pernicious act happening in the world just wait for a few days and the ugly name of ‘Israel’ will pop up as a key actor in the atrocities …”  (“Israel” often appears in scare quotes in his posts.) 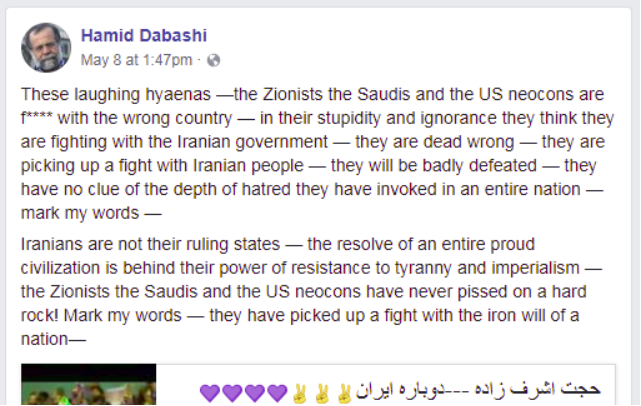 In a May 17 post, he denounced “racist ignorant Zionists from New York to London to Tel Aviv who ask Palestinians to stop hating.” Two days later, commenting on the British royal wedding of Prince Harry and Meghan Markle, he went on a tear against Great Britain:

They ruled and robbed the world with sadistic savagery, they left colonial scars around the globe in places like Palestine that still bleeds with human suffering, they turned human beings into slaves, stole their natural resources, and filled their museums and galleries with stolen relics of other people’s civilizations …

All this leads up to Dabashi’s denunciation of the BBC as “the vilest, crudest, most vulgar, most embarrassing propaganda machinery anywhere in the world – how can one trust a single word BBC says with such gimcrack peacockery! Go get a life people!”

He returned to the topic of the “royal wedding” – also in scare quotes – in a May 27 post that accused the BBC of “waterboarding the world” with its wedding coverage.

In the rest of the post, Dabashi says America and Israel are “a dysfunctional empire and its satellite garrison state planted like a thorn in the side of West Asia.” Trump and Israeli Prime Minister Benjamin Netanyahu are “corrupt racist thugs” who “have nothing to do or say or offer except misery in this world.”

In another post, he said the word “Israel” is equivalent with “mass murderers, with massacres, with land thieves, with incremental genocide, with war crimes, with crimes against humanity.” 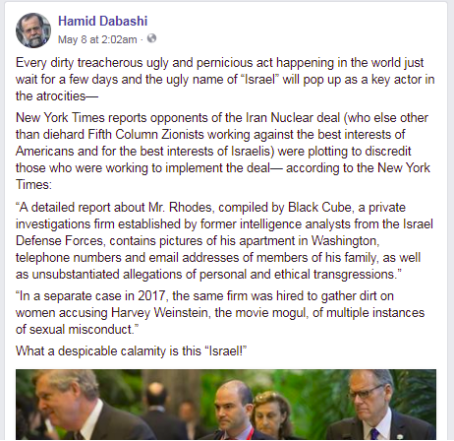 Alums for Campus Fairness told Columbia President Lee Bollinger and the Board of Trustees in a letter last week that they should distance the school from Dabashi’s expressed views.

It was signed by 35 faculty and staff at Columbia and its women’s college Barnard, more than a third from the College of Physicians and Surgeons or dental school. According to StandWithUs, which partners with Alums for Campus Fairness, it was also signed by “hundreds of concerned alumni and community members.”

Only three organizations tied to Columbia signed the letter: its chapters of Alums for Campus Fairness, Chabad and Students Supporting Israel.

“This is not a free speech issue” because Dabashi has a “history of demonizing Israel,” which creates “a hostile environment on campus for Jewish, Israeli and pro-Israel students,” they wrote. As examples, they said he had depicted Israelis as Nazis, compared Israel to the Islamic State and labeled “‘rich’ American Jews as the ‘Israeli Fifth Column inside the US.’” 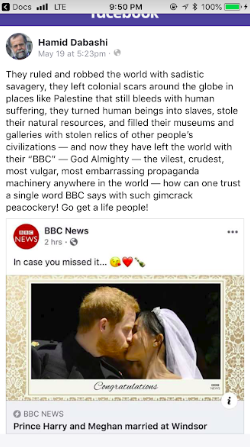 Though it said Dabashi can express “his personal opinions on his own time,” the signatories didn’t allege that the professor was sharing his views in class.

They asked Bollinger and the board to publish a formal statement “unequivocally” saying Dabashi’s postings are “antithetical” to the values of the university. The letter says “Zionism and the right of Jewish self-determination are core values” to Jewish, Israeli and pro-Israel students, and asks leaders to emphasize that these students are “as welcomed … as everybody else.”

Dabashi should be pulled from the classroom “until he commits to recognizing and ending his anti-Semitic rhetoric,” the letter concludes.

His statements align with the State Department’s “working definition of anti-Semitism” and the definition used by the International Holocaust Remembrance Alliance, they said: that Jewish citizens are “more loyal to Israel” or worldwide Jewish priorities than to “the interest of their own nations,” and that Israel’s existence is “a racist endeavor.” (The lead author of the State Department definition wrote in 2016 that it should not be used “to curtail speech on campus.”)

The letter links to a separate document with “selected comments” from those who signed the network’s petition form.

“Roseanne Barr lost the #1 rated TV show for comments less offensive than this that targeted a single person, whereas these comments disparage millions of people,” wrote one professor, Gregg Stone. Another, Richard Allen Friedman, suggested Columbia offer “alternative sections of every class taught by” Dabashi, taught by another faculty member.

The Fix twice emailed the Office of the President, Bollinger himself, Executive Vice President Suzanne Goldberg for comment on Dabashi’s statement. None has responded. Media relations officials have not responded to a Tuesday email.

How does he fit with ‘inclusion’ message? 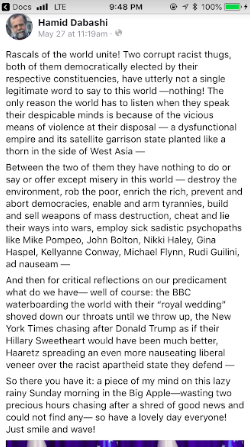 Columbia’s various initiatives on inclusion don’t specifically mention Jewish students, Israel or anti-Semitism, according to a review by The Fix.

The Office of University Life’s Race, Ethnicity, and Inclusion task force, created in 2015, says it “works to identify issues and develop responsive strategies” that address “interesting aspects of identity” in and out of the classroom, with the aim of creating a campus free of bias and discrimination.

Various resources from the Office of Student Life website also include quotes from administrators denouncing all types of hate, but none specifically concerning anti-Semitism.

The task force’s first annual report, covering the 2016-2017 academic year, begins with a quote from Bollinger: “I reaffirm Columbia University’s commitment to this mission and to the realization of our core values of inclusion and excellence.”

About the Author
Maggie Malecki
Maggie Malecki is a junior at Pennsylvania State University majoring in economics. She is the secretary of Penn State College Republicans and a member of Alpha Phi.