Admitted to some charges in order to look ‘cooperative’

When an accused student’s academic and professional career is on the line, the right to have an adviser during the university’s investigation can be the difference between graduation and expulsion.

Northern Michigan University may have violated its contract with a student by failing to inform him of that right, according to a ruling last week.

U.S. District Judge Gordon Quist approved breach-of-contract and due process claims against the public university by a former student who claimed it used his naivete against him in a sexual misconduct investigation.

Quist let the anonymous student continue his claim that NMU was obligated to tell him he could bring an adviser – including a lawyer – to disciplinary proceedings. But the judge’s opinion otherwise took a narrow reading of 6th U.S. Circuit Court of Appeals precedent on campus due process, the most student-friendly in the country.

The facts of the case “highlight precisely why representation, by an attorney or at least a trained advocate, is so critical in these cases,” the Foundation for Individual Rights in Education said in an analysis last week.

“NMU looks forward to a resolution of this case and appreciates the judge’s recent ruling,” a spokesperson told The College Fix in an email. “As is common practice, NMU does not comment on ongoing litigation.”

“John Doe” sued the university and Title IX Coordinator Janet Koski, investigator Donna Beauchaine and Dean of Students Christine Greer, claiming they violated his due process rights, discriminated against him as a male, and breached contract.

According to the judge’s summary of the lawsuit, John met “Jane Roe” in September 2016 when they worked together in a campus cafeteria. They had consensual sex the day they met and remained friends with benefits until nearly Halloween.

Jane had gone to a pre-Halloween party on October 30 without John, but texted him asking to walk her home afterward. John claims he did not see Jane consume any alcohol, and that she did not give any physical or verbal cues that she was intoxicated when he met with her.

At an unspecified later date, Jane told John that she had been drunk that night and regretted the encounter. John claimed that he had a different understanding, and the two “laughed about the incident” and remained friends.

Another hookup occurred sometime in the “summer or fall of 2017,” where John and Jane again had intercourse. Jane stopped responding to John’s text messages after this.

Ruled guilty only on charges he had ‘affirmed’

John was “shocked” by the allegations as presented by Associate Dean of Students Mary Brundage. While he thought the encounter was consensual and they were still friends, John thought that affirming the first and third allegations “would lead to a lesser punishment,” according to the summary. He was also given the option to deny or remain silent on each charge.

John also believed that telling his side of the story to Beauchaine would help his case, but the investigator treated Jane and John completely differently, he claims.

The accuser was allowed to give inconsistent testimony in her March 19 interview, claiming that she was “unable to move, form words, or talk.” In John’s interview two days later, Beauchaine used a “very aggressive tone” and language that presumed he was guilty.

Beauchaine did not ask why he had affirmed two allegations if he “disputed that Roe was too drunk to consent” and that Roe had actively participated. The investigator brought Jane in two days later to review the draft report. She claimed to only remember “bits and pieces of vaginal intercourse,” and that she “peed afterward to avoid a urinary tract infection.”

John was not allowed to respond to Jane’s statement and could only “comment on the accuracy of his own statement.” The university used a single-investigator model, meaning John was not given a live hearing and could not question Jane or present witnesses. Beauchaine only interviewed John and Jane.

John’s mistaken belief that his affirmations would give him a lesser punishment – the result of not being told he could bring an advisor – was proven wrong by the Sexual Misconduct Review Board.

It found him responsible for those two charges based on his affirmations, offering “no further rationale.” The board said there wasn’t a preponderance of evidence for the forced-fellatio charge. It recommended expulsion.

The board dropped the forced-fellatio charge outright at a meeting four weeks later, where members reviewed the video of Jane performing oral sex on John.  But it left in place the other two charges and its expulsion recommendation, claiming John “should have known that [Jane] could not consent due to being intoxicated.”

Under NMU policy, John could only appeal if he could provide new information that was “sufficient to alter a decision” or if other relevant facts were revealed in the process. The university denied his two appeals: that his due process and Title IX rights were violated, and that the punishment was “too severe.” 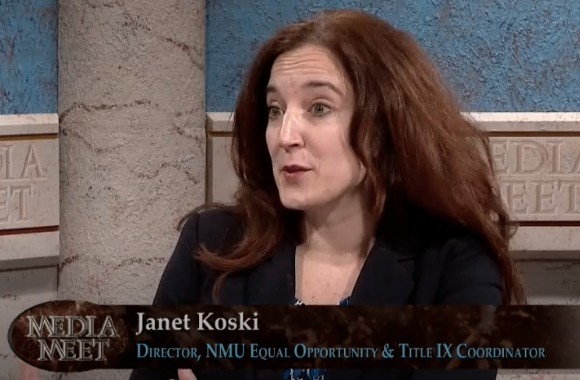 College policy required it to notify him of right to advisor

Quist’s opinion dismissed many of the claims, explaining how John’s case differs from the literal scenarios of 6th Circuit cases. He also failed to find anti-male discrimination in the school’s Title IX process.

The “only reasonable breach of contract” in John’s allegations was the school’s failure to inform John of his right to have an advisor or attorney during his investigation, the judge said. He noted that NMU’s sexual misconduct policy during the time period required the university to notify him.

Samantha Harris, vice president for procedural advocacy at FIRE, wrote in her analysis that “an attorney or other representative would very likely have advised [John] against” admitting to charges in order to look “cooperative.”

If John has described the chronology of charges and meetings accurately, “students are unlikely to know” they are allowed to bring an advisor or attorney “at their first meeting,” Harris said. John affirmed two charges at his first meeting.

John claimed he was entitled to a live hearing, cross-examination, legal representation and a higher standard than preponderance of the evidence. In his analysis, Quist called the first two plausible, since the Sexual Misconduct Review Board was not able to “choose between competing narratives” under the single-investigator model used by NMU.

But the 6th Circuit has only recognized two scenarios in which the accused student has a constitutional right to counsel, neither of which apply to John’s proceeding, the judge continued: “if the hearing is unusually complex” or “when the university uses an attorney in the investigation or decision-making process.”

John has offered “no case” in which a court said a college has a “constitutional duty” to tell a student that he’s entitled to counsel, Quist said. Even a college failing to follow its own policy does not “rise to the level of procedural due process violation.”

Sixth Circuit precedent is also clear that the preponderance standard is appropriate for campus sexual-assault cases, Quist said, citing a 2017 ruling involving the University of Kentucky.

‘University employees may have believed that credibility was not an issue’

John also came up short with Quist in his quest to hold Beachaine and Koski, the Title IX coordinator, personally liable for due-process violations. NMU argued they were covered by qualified immunity as government officials.

He must show that his due process rights were “sufficiently clear that a reasonable official would understand” that their actions violated John’s rights.

Quist said John’s rights to a live hearing and cross-examination, as determined by the 6th Circuit, were not “clearly established” at the time of the proceeding, again reading the appeals court’s precedents narrowly.

Though a decision against the University of Cincinnati said an accused student must be allowed to testify at “some kind of hearing,” it specified that this assumed the student had denied the allegations, according to Quist.

Since John did not initially deny all of his charges, “university employees may have believed that credibility was not an issue,” and that a hearing was not warranted. The Cincinnati decision – “the law in place at the time” – also specified that cross-examination was not necessary if the accused student “admits the ‘critical fact[s]’ against him,” Quist said.

It was “reasonable” for college officials to mistake John’s affirmations to the two charges “despite other contrary evidence,” the judge said, noting that John was only found guilty of the charges he affirmed. The 6th Circuit’s Baum ruling against the University of Michigan, which said cross-examination is necessary to resolve competing narratives, had also not come down before John’s proceeding.

Quist and John also disagreed on the extent of Baum’s holding on gender bias. The student said the 6th Circuit approved Title IX claims where a college “credited all female testimony over all male testimony” and “faced pressure to punish accused males.”

John has not shown a “causal connection” between gender bias and the findings against him, Quist said. The University of Michigan was under federal investigation for mistreating female accusers, and had ignored all male witness testimony and accepted all female witness testimony. In contrast, NMU was only under “general pressure … from campus victims’ rights advocates,” and the only interviewed parties were John and Jane.

Quist cited another 6th Circuit ruling in a case involving the University of Dayton. It found that “generalized, conclusory statements” that accusers, who are often female, are treated more favorably than accused, who are often male, “do not suffice to allege a particularized causal connection between gender bias and Doe’s suspension.”

John’s allegations only point to bias in favor of the complainant over a respondent, and not in favor of women over men, the judge continued. It’s not enough to claim that “the majority of respondents are male,” either.