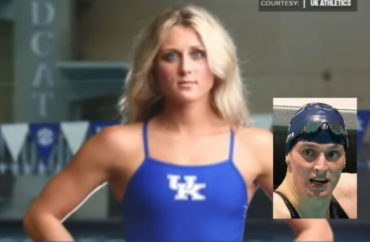 “Another slap in the face to women.”

That’s how former Kentucky swimming star Riley Gaines described the news that the University of Pennsylvania named transgender Lia Thomas as one of its two nominees for the National Collegiate Athletic Association 2022 Woman of the Year award.

“Being the real girl in that photo and also University of Kentucky’s nominee for NCAA WOTY, this is yet another slap in the face to women. First a female national title and now nominated for the pinnacle award in collegiate athletics. The @NCAA has made this award worthless,” Gaines tweeted Friday.

“This award combines athletic performance with academics, service, and character,” Gaines continued. “What character has Thomas shown other than sheer selfishness and entitlement? The disrespect and disregard for the other female athletes in Thomas’ interviews is eye opening.”

Gaines had made the comments in a retweet response to conservative talk show radio host Clay Travis’ comment that “Penn nominated transgender swimmer Lia Thomas as their NCAA woman of the year. Hell of an accomplishment to be woman of the year after only being a woman for a couple of years.”

Being the real girl in that photo and also University of Kentucky's nominee for NCAA WOTY, this is yet another slap in the face to women. First a female national title and now nominated for the pinnacle award in collegiate athletics. The @NCAA has made this award worthless. https://t.co/MRCieqbltd

The controversy between Gaines and Thomas specifically dates back to earlier this spring, after the two tied at the NCAA Championships in March. Swimming World Magazine reports:

In the 200 freestyle final at the NCAA Women’s Championships last month, Kentucky senior Riley Gaines finished tied for fifth with Penn’s Lia Thomas, the transgender swimmer who was the center of attention at the meet because she was allowed to compete against cisgender females under NCAA rules. Thomas was the NCAA champion in the 500 free, and she was favored to win the 200 free as well, but she finished almost a second-and-a-half off her best time and more than two seconds behind race winner Taylor Ruck.

As The College Fix reported on Friday, Thomas formerly competed on the Penn men’s swimming team, but smashed women’s sports records and won big during the 2021-22 NCAA season as a transgender swimmer.

Thomas was allowed to participate on the women’s team after taking drugs to suppress testosterone for one year, in line with NCAA regulations.

Each eligible school can nominate up to two female senior athletes for NCAA Woman of the Year, according to the NCAA website. Some 577 athletes have been selected for 2022, and nominations are now closed.

For more than 30 years, the annual award has recognized “female student-athletes who have exhausted their eligibility and distinguished themselves in their community, in athletics and in academics throughout their college careers,” according to the NCAA’s July 14 release.