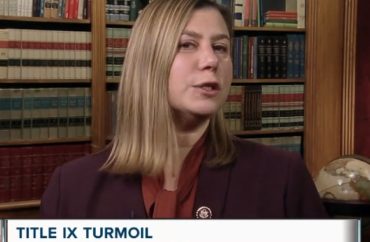 As if ‘she hadn’t read’ the proposed regulations at all

Opposing proposed federal regulations because they contradict your values is fine. Creating a straw man so you can gin up opposition to those regulations is not.

Rep. Elissa Slotkin is doing the latter as the Department of Education plans to publish its final Title IX regulations on campus sexual misconduct procedures.

The proposed regulations, made available for public comment more than a year ago, would require colleges to let student parties in a proceeding cross-examine each other through their lawyers or other advocates.

“It would make it harder for young women to come forward on issues of sexual assault,” Slotkin says in the interview:

I’m not sure if the proposal to raise the bar [for what qualifies as sexual harassment, bringing it in line with Supreme Court precedent] does anything other than exclude a bunch of potential harassment cases.

Investigative reporter Ross Jones leads in Slotkin’s next comments by saying the proposed regulations “would allow the accused to cross-examine their accuser,” failing to note that students themselves would not conduct cross-examination. Slotkin says:

Just think about that for a second, that someone could potentially have perpetrated a sexual assault on a woman, and then the next day or a few days later he gets to cross-examine her.

The proposed regulations are unambiguous about the parameters of cross-examination, which is to be conducted by each party’s “advisor of choice,” including lawyers.

Perhaps most importantly, and in the biggest change from the leaked draft regs, the proposed regulations codify the 6th Circuit’s finding: cross-examination (by a lawyer or advocate for the accused) is required. pic.twitter.com/OKfk4LaYaM

The department cited the 2018 Baum precedent from the 6th U.S. Circuit Court of Appeals, which ordered the University of Michigan to allow cross-examination in some form that doesn’t rely on a hearing panel asking (and choosing to exclude) questions.

The appeals court gave colleges the option of allowing cross-examination through “agents” for each student or by students themselves, though it warned the latter option could subject students to “further harm or harassment.”

UMich chose direct cross-examination, provoking outrage from advocates for both accusers and accuses students, who favor the agent option. The administration justified the choice by saying it wanted to keep the playing field level between student parties in a proceeding.

Under the proposed regulations, UMich would not be allowed to continue this system of peer-to-peer questioning.

It strains credulity that Rep. Slotkin may be confusing the options allowed under Baum with the proposed regulations themselves, according to Brooklyn College Prof. KC Johnson, who chronicles Title IX litigation.

She’s been active on the issue “for more than a year,” he tweeted: “It’s seems very hard to believe that she’s unaware of Baum’s holding that due process allows this right; or that she hadn’t read the proposed regs (which allow x-exam by lawyer/advocate, but not the student).”

.@RepSlotkin has been active on this issue for more than a year. It's seems very hard to believe that she's unaware of Baum's holding that due process allows this right; or that she hadn't read the proposed regs (which allow x-exam by lawyer/advocate, but not the student).