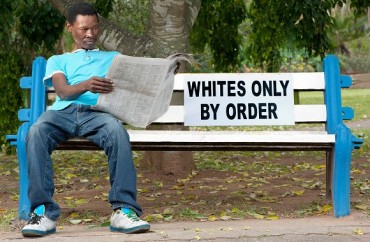 The film Stonewall shows a fictionalized grand opening of the gay-rights movement, but in a bid for commercial success, the filmmaker allegedly replaced (historical) black transgender figures with (fictional) white gay men.

That’s why LGBT student activists tanked a screening of the film at Colorado College, scheduled for Oct. 21 and now “indefinitely postponed,” The Catalyst reports. (The school later told Reason‘s Robby Soave that the screening has been rescheduled for Thursday.)

“In a world where cisgender, white gay people have finally achieved ‘marriage equality’ and many see the struggle as being over, it is reinforcing a hierarchy of oppression to invent someone who never existed and place them in a historically-based film with the express purpose of silencing more marginalized groups.”

The Film and Media Studies Department said it planned the screening partly to “question some of the decisions made in the film’s representation of minorities.” One of the film’s executive producers is a Colorado College alum, trustee of the school and donor as well as a gay-rights activist.

But having a critical discussion is really “a way of engaging in respectability politics,” which is oppressive, one student activist said:

“I think Colorado College should cancel the screening because the safety and well-being of queer and trans* students surpasses the importance of a critical discussion.”

RAID said that exposing students to different ideas “will, yet again, put queer students in the position of having to teach to justify the validity of our feelings, which is emotionally draining, difficult, and frankly, not our job.”

The administration offered a “safe space” forum Oct. 19 for students to vent about Stonewall, but the “intensity” of their opposition led the school to cancel the screening.

One student who’s studying abroad in Senegal, “where homosexuality is illegal and punishable by imprisonment,” told the activists to pipe down:

“’Abuse’ here means gay men having their fingernails pulled out, lesbians being ‘correctively raped’ to make them straight, or LGBTQ individuals being forced to leave the country. … Using the same word to describe things which are worlds apart minimizes the real violence and abuse which many LGBTQA people still live with.”

UPDATE: Colorado College has rescheduled the screening for Thursday, Reason reported. The story has been amended.