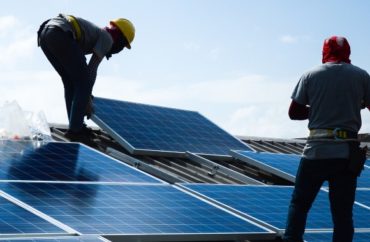 Student activists at Loyola University Chicago have sent a list of demands to the administration, including moving the university to 100 percent renewable energy use by 2025 and a complete fossil fuel divestment by July 2022.

“In light of the 2021 Climate Change Conference, we are holding you accountable for your claims to celebrate youth activism,” Sunrise Movement LUC said in a petition on Actionnetwork.org, which has 108 signatures as of March 27. The students want the university to “[s]ource 100% renewable energy by 2025,” among other requests.

The petition follows a recent Climate Change Conference held virtually on March 9 by the university’s new School of Environmental Sustainability.

University officials opened the environmental school in December 2020 and said it was “the first-ever school dedicated to environmental sustainability across Jesuit institutions worldwide.” Keynote speakers at the recent climate conference included Dejah Powell, a leading organizer for the Sunrise Movement.

“It is not enough to acknowledge youth activism–listen to and follow through with your own activists on campus,” the letter from the activists said. The Sunrise group “recognizes the intersection between environmental and social justice issues.”

The Loyola group’s petition combined “the existing demands from student organizations” including the student government, the Student Environmental Alliance, Our Streets LUC, the Black Cultural Center and the graduate workers union on campus.

“You have not fully committed to improve the wellbeing of the Loyola Community or support our Jesuit values,” the petition said. It also demanded the university “become completely independent of [the Chicago Police Department,” increase transparency on university initiatives and end its contract with food service provider Aramark.

The student government passed a resolution in October 2020 that asked the university to end its relationship with the food service provider due to its involvement in the “Prison Industrial Complex.” The company provides food service to a number of prisons.

The College Fix reached out to Sunrise Movement LUC to inquire about any energy experts it consulted, how it planned on financing its demands, what alternative companies it had in mind to take over for Aramark, and what it meant by becoming “completely independent of CPD.” The group did not respond to multiple emailed requests for comment in the past week.

The graduate workers union and the environmental alliance also did not respond to two emails sent to publicly listed contact emails in the past week asking for further details on the implementation of the demands.

University working toward implementation of goals

A university spokesperson said that the Catholic institution has worked to reach the environmental goals.

The university “supports portions of the LUC Sunrise Movement petition that are within its legal ability to execute, and we are actively and aggressively pursuing the environmental sustainability goals listed,” Anna Zach, a university spokesperson told The College Fix via email.

When asked about the petition’s demand to completely divest from fossil fuels by 2022, Zach said Loyola is “actively working toward divesting entirely” from fossil fuels. She said university officials already took the initiative of “not investing new endowment money into fossil fuels several years ago.”

A former university official said in 2016 that about two percent of Loyola’s endowment is invested in “fossil fuel or non-renewable energy,” according to a student government resolution.

On the feasibility of using a 100% renewable energy source by 2025, Zach said Loyola is aiming to reach “carbon neutrality in regards to greenhouse gas emissions by 2025,” a goal it has been striving for since 2017. “We are constantly moving toward more renewables” including a recently installed geothermal system to heat and cool the campus.

“Loyola is consistently ranked in the top 5 percent of green campuses in this country,” the spokesperson said. She also said the Princeton Review named Loyola to its “2021 Green Honor Roll,” making it “one of only 30 schools” on the list.

The university “supports students’ right to express their opinions and perspectives.”

“We support students who express their views through respectful and responsible means, as it is a hallmark of the intellectual vitality and social awareness of our student body,” she said.

All progress made at Loyola in reducing the campus’ environmental footprint has been accomplished “in partnership with student advocates, as well as faculty and University administration,” with student-led initiatives enacting “real change” at the university.

Zach said university officials uphold the “Jesuit tradition of social justice” in response to a question about the activist’s statement that Loyola had betrayed its Jesuit values.

She listed Loyola’s achievements in environmental sustainability, such as lowering its environmental footprint by 50 percent since 2002, launching three campus centers dedicated to environmental research and making investments in related projects.

Student government has been meeting with administrators

The petition’s demands “are in line with the university’s values of social justice and environmental stewardship,” Maddie Drescher, the president of the Student Government of Loyola Chicago, said in an email to The Fix.

Both the student government and other organizations have been in contact with university administrators about the petition’s demands, she said.

Drescher told The Fix that the student government’s legislative functions allow it to hold meetings with various Loyola administrators, pass recommendations and appoint members to Loyola committees and organizations—such as Loyola’s Strategic Planning Steering Committee—where they can advocate for inclusion of the petition’s goals.

Drescher also provided more information on the demand that Loyola become “completely independent” from the Chicago police. The university has previously denied this request, pushed by Our Streets LUC.

University officials “would ideally appoint members of the Campus Safety department that would not have previous associations (either through tenure or training) with the Chicago Police Department to better serve our community in the future,” the student government president said.

She said she would like to see “a shift towards more unarmed officers to be first-responders.”

Divesting from fossil fuels by 2022, switching to 100 percent renewables by 2025, and restructuring and expanding campus resources for the Campus Safety Department and LGBT+ and BIPOC communities are likely to require significant funds from the university.

Dresher said a “reallocation of funds” would finance many of the demands and, to the best of her knowledge, it “wouldn’t require additional funds” to accomplish the different goals.

“The reality is that these initiatives are currently not funded – which is precisely the reason the petition was written in the first place,” Drescher said.