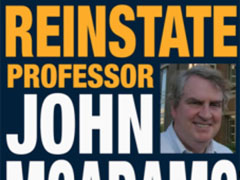 Publicly tattling on colleagues who tell students they can’t share certain views in class is apparently “harassment” at Marquette University.

On his Marquette Warrior blog, Professor John McAdams shared the plight of a student whose philosophy instructor told him it would be “homophobic” to say he supports traditional marriage in class, as The College Fix previously reported.

Marquette is a Jesuit school, by the way.

Now the dean of the College of Arts & Sciences has written to McAdams, telling him:

The university is continuing to review your conduct and during this period–and until further notice–you are relieved of all teaching duties and all other faculty activities, including, but not limited to, advising, committee work, faculty meetings and any activity that would involve your interaction with Marquette students, faculty and staff. Should any academic appeals arise from Fall 2014 semester, however, you are expected to fulfill your obligations in that specific matter.

McAdams will still get paid but he’ll have to ask for permission to come back to campus. Dean Richard Holz attached Marquette’s harassment policy, “guiding values statement,” mission statement and “sections from” the faculty handbook, saying those materials would “inform our review of your conduct.”

McAdams says Marquette leaders must think blogging constitutes harassment, except that his post wasn’t “directed to a protected class”:

Marquette’s harassment policy is absurdly vague and includes “behavior is intimidating, hostile or demeaning or could or does result in mental, emotional or physical discomfort, embarrassment, ridicule or harm.” That’s right, even mental discomfort (which should be a normal part of having one’s opinions challenged in a university) is considered harassing.

He accuses officials of “gross misconduct” whether they are clamping down on his blogging, which goes back 10 years, or simply conducting a “pro forma investigation,” which he says alone constitutes “harassment” against him:

Marquette, in other words, has again shown itself to be timid, overly bureaucratic and lacking any commitment to either its Catholic mission or free expression.

The instructor portrayed in an unflattering light by McAdams, Cheryl Abbate, earlier said she wanted the school to “actively enforce” a policy that would stop her from being “publicly demeaned” by McAdams.