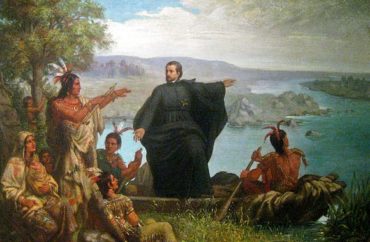 Marquette University students are demanding that their university change the school seal to emphasize the role Native Americans played in the early exploration of America.

But not everyone is on board with the proposal and one professor at the university said that the current seal is historically accurate.

Amanda Harris, a student at the Jesuit Catholic university in Milwaukee, launched a petition on July 6 to change the university’s seal, which depicts Father Jacques Marquette, the university’s namesake, and a Native American guide navigating a body of water. The petition is addressed to the board of trustees.

The seal is based off a painting called “Father Marquette and the Indians.” Harris said the seal’s current version crops out a part of the painting that showed Marquette receiving instructions from Native Americans.

“By cropping out this Native American person from the seal, it is erasing the truth,” the petition states.

“The painting shows a Native American person giving Father Marquette directions. The image in the seal shows the complete opposite.”

Harris told The College Fix in an email that she decided to launch the petition after discussing the seal in one of her classes. Harris also said that recent racial controversies played a role in her activism. 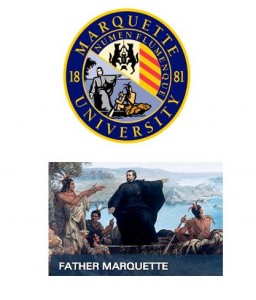 “I remember wondering why our seal still included that cropped out image,” she said. “Since this is my last year at Marquette, I felt there was no better time than now to see if the university would be willing to change the current seal.”

She said the seal’s image “asserts white dominance” because it shows Marquette standing above his Native American guide.

The petition states that Marquette’s seal is “problematic” and does not align with the university’s vision statement, which preaches the welcoming of diversity and inclusion. It has garnered about 400 signatures so far.

Even though Harris organized the petition, she said she is going to work with Native American student groups on campus to present it.

“Since I am a white person who has no indigenous heritage, it is important to have indigenous students and staff to present the petition since changing the seal calls for recognizing indigenous people,” she told The Fix.

She said she plans to have the Native American Student Association and Center for Engagement and Inclusion present the petition to the university as better representatives of indigenous people.

MORE: U. Virginia under fire for new athletic logo

But one professor at the university defended the current seal, arguing it correctly portrays Marquette’s legacy.

John McAdams, a conservative professor at the university who writes about campus controversies on his personal blog, Marquette Warrior, criticized the petition.

McAdams, who teaches political science at the university, said the seal is accurate.

“The seal as it stands is quite appropriate, giving Fr. Marquette the central place, as this is ‘Marquette University’ after all,” said McAdams in an email to The College Fix.

“In a broad sense, and symbolically, the seal is historically correct. Fr. Marquette was the visionary who set out on a great expedition of exploration. The Indians were just living there, and while they certainly played a helpful role, they were not the visionary explorers,” the professor said.

He said he believes that the demand for a change to the university’s seal is just another example of virtue signaling, citing how people often cling to “minor and inconsequential things” that have no relevance to marginalized groups.

A student leader for the Young Americans for Freedom Marquette chapter told The College Fix that the petition misses the mark.

Chairwoman Miranda Spindt said that the painting in its entirety portrays a part of history that is no longer accepted and “Cropping it differently will not change the symbolism or address the terrible history of violence and oppression that Native Americans have faced.”

“Efforts would be better spent educating students on Native American history, learning about what problems Native students are specifically facing, and most importantly having real discussion about finding solutions to those problems,” Spindt said.

“That would be much more respectable than just picking a different part of an obviously misunderstood painting.”

In 2015, four Marquette students sat in a street near campus, demanding that the university change its seal, among other requests.

Marquette Wire reported that the university is reviewing the seal and considering ways to update it. It did not respond to requests from The College Fix for comment Monday.