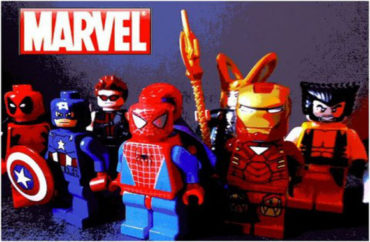 Marvel Entertainment’s comics division appears to have a death wish.

The company’s movie division is raking in the big bucks, so why care about a dying print medium, right? It certainly seems that way, and has for a number of years now.

Marvel’s current cadre of comics creators is like the whiniest pupils imaginable in a gender studies class. Unlike the company’s godfather Stan Lee, who covered politically controversial topics in an even-handed manner, today’s writers exude far-left ideology without limit … and then rip those who dare to criticize them, especially on social media.

Lee, who said the Vietnam War was “ridiculous” and “utterly indefensible” still did not overtly take sides in the pages of his product. Views on the war, at least based on the letters Marvel had received, “were almost evenly split between support for and opposition” to the conflict. His writers emulated their boss.

Now, however, no one gives a second thought, for example, to turning Captain America into a Viet Cong sympathizer.

This past week, in a move that many believed had to be a parody, Marvel revealed that the New Warriors, a superhero team popular in the 1990s, will be revamped — and will include a “non-binary” hero as well as a, well, let’s say “plus-sized” one.

The non-binary member is one of a pair of twins (which appear to be modeled after the classic Wonder Twins of “Superfriends” fame) and goes by the name — ready? — “Snowflake.” Their (because plural pronouns!) brother is called — wait for it! — “Safespace.”

Creator Daniel Kibblesmith, a writer for the “The Late Show with Stephen Colbert,” says the twins’ monikers are based on “this idea that these are terms that get thrown around on the internet that they don’t see as derogatory. To take those words and kind of wear them as badges of honor.”

However, with regards to the latter term especially, college types don’t consider it a negative. In fact, they use it routinely. 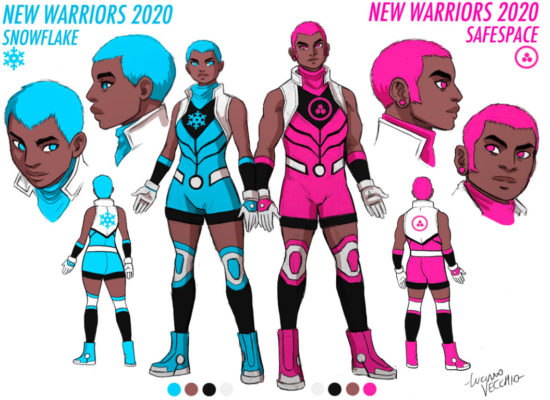 In the video below where he introduces his new heroes, Kibblesmith remarkably describes Safespace (above, right) as a “kind of a big, burly sort of stereotypical jock.” Because, as we all know, big, burly stereotypical jocks run around in fuschia onesies, and dye their hair the same color.

Safespace can create force fields, but only “if he is protecting somebody else.” (Get it?) Snowflake (above, left) can “generate individual crystallized snowflake-shaped shurikens.”

I thought this was a parody at first, but Marvel is introducing two social justice characters named Snowflake and Safespace. Snowflake is non-binary. They are part of Marvel's "The New Warriors." pic.twitter.com/dYr7iW7ZcT

If the twins aren’t “representative” enough for you, here comes “Trailblazer” (below) whom Kibblesmith describes thusly: “She’s a group home and foster kid who is volunteering at a senior center when this mysterious threat shows up […] And she inherited from her grandfather a magic backpack of divine origin.

“We picked the name Trailblazer because she’s somebody who charges into action. She knows that she can do some good with this mysterious gift she’s been given.” 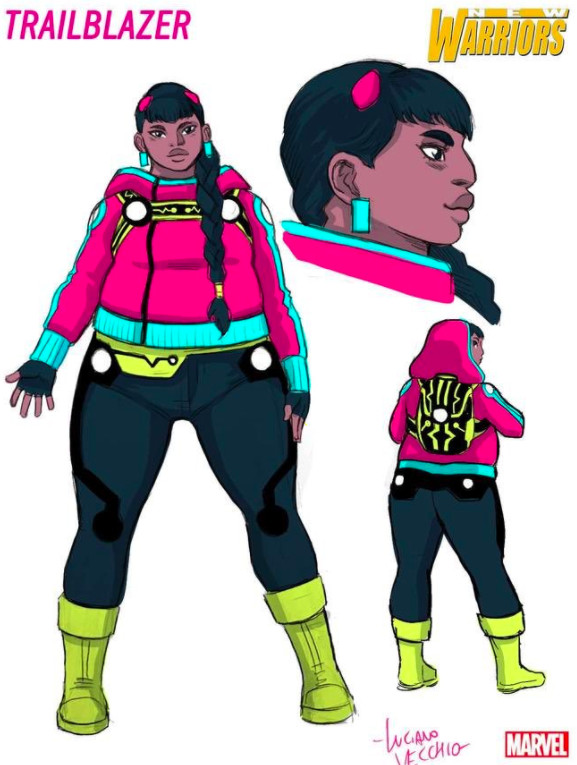 The description of (new) New Warriors member “Screentime” indicates Kibblesmith is the Ted Stevens of his time: “Screentime is an internet kid taken to its sort of logical conclusion. As a youth he was exposed to his grandfather’s experimental internet gas, and that has patched him permanently into the world wide web.”

Yep. “Internet gas.” I know it’s comics, but like with scifi books and movies, there has to be some science behind the fiction. People can buy that Peter Parker gained the powers of a spider after being bitten by a radioactive arachnid because radioactivity is a real thing we know can result in all sorts of weirdness. But … internet gas? (Stevens, you may recall, was the US senator from Alaska who once described the Internet as a “series of tubes.”)

Social media is awash with commentary ridiculing Kibblesmith and his team. I still wonder if all this will be outed as a parody at some point, but now, like three years ago, you just can’t tell with Marvel.