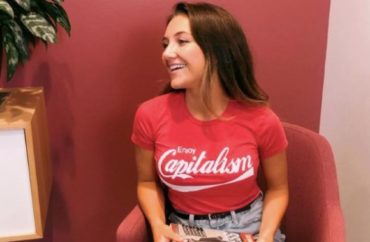 As a 22-year-old college grad working a nine-to-five job in advertising, Morgan Zegers wanted more. So she took a chance. That’s what one does in America, after all.

In 2019, Zegers quit her job and launched her nonprofit, Young Americans Against Socialism, or YAAS, a nonprofit dedicated to exposing the truth about socialism and communism while educating millennials and Generation Z on the benefits of classical liberalism and capitalism.

She did not tell her parents, and says she felt “very nervous” and knew there were “no guarantees.”

“Am I going to get paid one day?” “Is this going to fail after a week?” These questions and more filled her mind, she says, but she pushed forward. Then things started to happen, with appearances on Fox & Friends, Glenn Beck’s radio program and a speech at the national Tea Party rally.

She quickly knew she had made the right choice.

“You can work in a job that doesn’t make you feel fulfilled, and that will feel like you are slowly being waterboarded everyday. Or, you can choose to follow your passion,” Zegers told The College Fix in an interview.

Today, Zegers, 24, is a guest on a plethora of podcasts and has become a Turning Point USA darling and a frequent contributor to The First TV and Newsmax. YAAS, meanwhile, uses social media as a major tool in reaching young people.

On social media, add up her and her organization’s followers on various platforms such as Instagram, YouTube and Twitter, and it’s well over several hundred thousand and growing.

Zegers says socialism encompasses the shift toward nationalizing American industry and the economy as well as the rise of totalitarianism and authoritarianism. She cited over-regulation, the shutdowns, media propaganda and indoctrination in schools as trends that all tie together.

“Every angle and every step of the leftist uprising, not just the step of socialism, is really taking place right now,” she told The Fix. “It’s such a larger conversation that needs to be had.”

Zegers says that because of this, she is now thinking of widening the branding of YAAS.

“Should I change the name to like, fighting communism? Because that’s really what we’re leading to, and socialism is just that economic step,” Zegers says.

As an undergrad, Zegers wasn’t always so outspoken.

Zegers graduated from American University, which she says is one of the most politically active schools in the country with nearly all its students and professors expressing leftist views.

Zegers says that she had multiple “run-ins” with professors, who said terrible things about conservatives. She says her professors said that conservatives are racists who hate immigrants and black people, and that is why conservatives vote the way they do.

“In all of these situations, I didn’t have the courage to speak up,” Zegers says.

It was there that Zegers says she was also confronted by “The Darkening,” a Black Lives Matter group on campus.

“They called me a racist Trump supporter, and I lied about being a Trump supporter, because I didn’t feel comfortable speaking out,” she says. “Instead, I was like, ‘How dare you accuse me of this?’”

“At the time, I wasn’t too much on the Trump train, but at the end of the day, I just didn’t want to admit publicly how I felt. And now, of course, it’s just completely changed.”

Zegers says that her eventual outspokenness was not a hard, fast switch. She says that a gradual growth is what it took for her to be more comfortable with speaking out about her values.

“It just comes with time,” she says. “The more I sought out platforms to speak about this, the more I realized that we can all relate on these stories, and the better off I was.”

Zegers says that conservatives have the power to show that they are kind, caring, compassionate people.

“And I think the more that we speak out about that in a calm way, it will get better,” Zegers says.

Proud to be an American

Zegers went to American University because of the location, and because the institution has a really great program for military families like hers, to help them financially.

Zeger’s father is a colonel in the military, and she spent a lot of time in high school and college in the Veterans of Foreign Wars Ladies Auxiliary.

“That’s really how I got my start in community activism, and in politics really,” Zegers says.“I became an officer of the auxiliary, and really everybody in that auxiliary, everybody at the post, they’re all veterans from like, the Vietnam War, and they’re all decades older than me.”

“To be involved in that when I was such a young teenager, that really set me on the course for where I am now, and I still think back to that,” she says. “So, any military family members that qualify, the girls, I suggest that they join.”

As a member of the VFW ladies auxiliary, Zeger’s favorite American holidays are the patriotic ones. She says marched in parades on Armed Forces Day, Memorial Day and the Fourth of July. She was alongside vets at the events.

“That was such a special moment for me, and it means so much for them to see, because the thing about it is, the veterans that came home from Vietnam never got that proper welcoming,” says Zegers. “I mean, they were spit on when they got back, and so, they still deserve that show of respect. So I really love that, and I love the traditions of America.”

She says she gets frustrated when people say that America doesn’t have a culture or values, she says, it does; and in addition to patriotic events that add to the culture, there’s values such as a nuclear family and the institution of marriage, and the importance of children and protecting our elders, economic independence, and local and state control from the federal government.

“When we disintegrate culture like that, and act like we don’t have a culture as a country, you’re really erasing all those important things,” she says. “I hope that we can get back to the root of it.”

All in the family

Zegers’ family is from upstate New York, and would take trips to the New Jersey Shore when they wanted to go on vacation. She has one younger sister and one older brother, who now has a family of his own.

“They’re beautiful. I have two nephews,” says Zegers. “I’m the godmother to one, so I take that really seriously, and it’s an honor.”

Also, Zegers and her dad started a business called “Zegers Freedom Flags” selling handmade wooden American flags. The idea came about after watching a YouTube video one day. They started making them together for fun. Zegers says for her first flag it took her three and a half hours to carve all 50 stars. 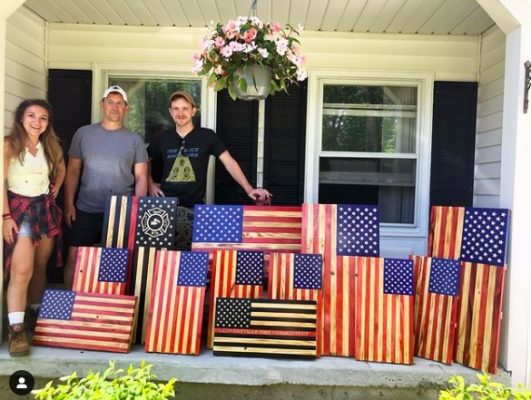 “But when I was done, it was just really majestic,” she says. “We didn’t really know what to do with it, so we donated the first flag to a veterans fundraiser, and then I was like, you know what? I think we could actually sell these babies.”

And they did. In fact, Zegers paid off student loans by selling her wooden flags. Now it’s a family affair, as her mom, dad, and brother all work for the flag business.

What’s more, Zegers’ boyfriend, Jared Taylor, is a co-founder of the Black Rifle Coffee Company, a veteran-owned company that also sells vehicles. Business is booming for them, too, she says.

Among Zegers’ recent events was a speech at the Young Women’s Leadership Turning Point event in Texas in June.

Zegers says that part of her professionalism as a woman in the workplace is highlighting her femininity: “I love to show that we can really be feminine and also really rock it at our careers.” 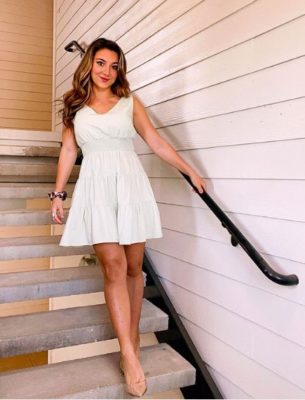 “For me, I’m really trying to build my career up around economic opportunities and business opportunities that allow me to then be there for my family when I decide to have a family one day,” she says. “I’m really excited for that moment, and thankful for this economy.”

Something that college women can do to work toward professionalism now is to find as many opportunities as they can outside of their college campuses, she says.

“I was never an on-campus student. I always went to class and then I would get right off campus and go down for an in-person experience, whether it was an internship, a side-job, or a volunteer opportunity,” says Zegers. “I was in D.C., and so I took every opportunity that I could.”

She also advises young women to be smart about which elective classes they choose to take and work to build and maintain professional connections, which are important.

For example, she says, she credits Bill Montgomery, the Turning Point USA co-founder, for help in her formation of YAAS, helping her launch social media platforms and teaching her how to practice her speeches.

“He got me started in a much greater way than I ever could have known,” she says.

The battle is real

Zegers says she was recently reminded what’s at stake. It was on the plane ride in 2020.

A girl tapped her on the shoulder and said, “Are you Morgan? I love you, and I love all your stuff, but I get nervous. I want to start posting more stuff to my Instagram story that are political … and I can’t, because I know I’m going to lose followers and friends. When I lose a follower, it’s a friend actually unfollowing me.”

When she saw it from that girl’s perspective, she says she thought it was ridiculous that people were actually unfriending the girl over just sharing memes to her Instagram story.

“I’m privileged enough to be able to say that I post this crap all the time. I don’t care. Call me a racist, a Nazi, whatever word you have for me this week. I don’t really care anymore,” she says. “But it’s really hard when it affects people who don’t have the backing to really speak out.”

Zegers does inspire others to be brave.

Amber Williams, a 19-year-old YWLS attendee and Zegers fan, will start at the University of Texas this fall.

“I think Morgan’s personality is just great. She’s confident, yet approachable, and feels more like an old friend than the public figure. When I met her last spring, she related to my frizzy hair struggles, and shared some of her own. That type of individual exchange goes a long way,” says Williams.

Chaida Bango Bango, 21, a student at the University of Maryland, is a former socialist who now admires Zegers.

Bango Bango formerly supported widespread welfare and free college. Zegers’ talking points on over-taxation and corrupt big government are ultimately what touched Bango Bango the most, she told The Fix.

Bango Bango now describes socialism as “poisonous,” and says that Zegers has educated young individuals, like herself, on the ways in which socialism ruins lives.

Bango Bango says that she recognizes that younger generations are increasingly becoming more in favor of the socialist ideology such as “tax the wealthy” or “medicaid for all.” 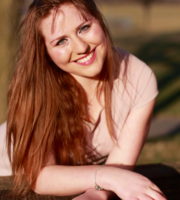