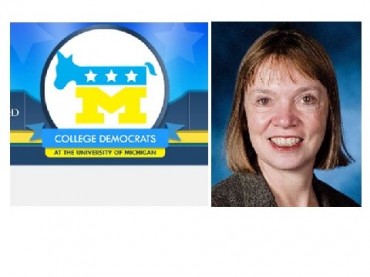 The chair of the College Democrats at the University of Michigan defended the professor who declared in a recent opinion column “I hate Republicans,” saying in an email to The College Fix that he believes the scholar’s op-ed does not necessarily indicate that she acts with malice toward Republican students, nor will her words create a chilling effect for conservatives on campus.

“I do believe that it is often important for professors to remain publicly neutral on political issues in order to maintain credibility with their students,” student Trevor Dolan, chair of the College Democrats at the University of Michigan, told The Fix about Professor Susan Douglas’ controversial column. “However, I do not believe that her having written this article is an indication of her professionalism in the classroom.”

Dolan said while the column may have some impact on Douglas’ future classes, her beliefs are not an example of widespread bias against conservatives among faculty at the University of Michigan, nor should they negatively affect Republican students on campus in general.

In mid-December, Douglas – the chair of the college’s Communication Studies department – wrote an opinion column for In These Times in which she declared:

“I hate Republicans. I can’t stand the thought of having to spend the next two years watching Mitch McConnell, John Boehner, Ted Cruz, Darrell Issa or any of the legions of other blowhards denying climate change, thwarting immigration reform or championing fetal ‘personhood.’ ”

Douglas’ column, titled “We Can’t All Just Get Along,” attempted to characterize the recent polarization between Republicans and Democrats, and ultimately singled out members of the American political right as the source of the nation’s political chasm.

“Obviously, my tendency is to blame the Republicans more than the Democrats, which may seem biased. But history and psychological research bear me out,” Douglas had argued. “According to researchers, the two core dimensions of conservative thought are resistance to change and support for inequality. These, in turn, are core elements of social intolerance. The need for certainty, the need to manage fear of social change, lead to black-and-white thinking and an embrace of stereotypes.”

After its publication, many students and others voiced concern over Professor Douglas’ publicly espoused prejudice.

“Professors are in a position of authority, and while it may or may not be at a conscious level, they can inhibit dissenting views in intellectual discourse,” University of Michigan student and Young Americans for Freedom Chairman Grant Strobl said in an email to The College Fix. “In her article she said that there was a strong political bias in scholarship selection – that standard can naturally apply in classrooms.”

The University of Michigan initially defended the column, saying it “was protected under the university’s ‘faculty freedom of expression’ core value,” but that campus leaders were “working ‘vigilantly’ to ensure Michigan students can express differing views ‘without fear of reprisal.’”

But University of Michigan President Mark Schlissel in mid-December ended up chastising the column in a statement, saying that “expressing hate towards any group, rather than focusing on ideas and issues, is not up to Michigan’s standards of discourse and civil behavior. Broad, negative generalizations about any group do not, in my view, facilitate informed and intelligent debate. Rather, they produce alienation, resentment, and even hate in return.”

In the weeks following its publication, Professor Douglas did receive support among those advocating for her freedom of speech. Yet she was also reportedly the target of some death threats.

It remains to be seen whether she will face any disciplinary action.

Douglas issued an official statement in mid-December in which she said she regretted “any suggestion I may have conveyed that some students are not welcome or would find a hostile environment in my classrooms.”

She did not respond to a request by The College Fix seeking additional comment.