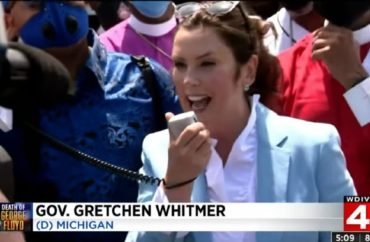 Hillsdale College says it followed Michigan COVID-19 orders in its graduation weekend that concluded Saturday night. The state says the nondenominational Christian college, famous for rejecting federal funding, broke the law when it decided to host the festivities in person.

But rather than use their state monopoly on violence, Michigan Gov. Gretchen Whitmer (above) and Attorney General Dana Nessel passed the buck to local law enforcement, which refused to shut down the ceremonies.

The Detroit News reports that Hillsdale “required everyone to wear a mask,” took guests’ temperatures and seated them six feet apart and told them not to walk around at “some events” over the three-day celebration.

Graduate Arena Lewis, who brought family members from New Mexico to the ceremonies, said she was surprised by the strictness of the protocol: “I hardly ever see kids without masks on. I think everyone’s being very compliant and obeying out of Christian charity and love for everyone else.”

Whitmer said she was “gravely concerned” that Hillsdale was meeting at all, and Nessel’s office said the college was violating local restrictions on “organized” gatherings of more than 100 people, the News reported Thursday. Nessel’s spokesperson said the college showed “lack of consideration” with the festivities, and that “we trust the local law enforcement agencies to exercise their authority and discretion in their enforcement efforts.”

That “trust” appears to be a rhetorical copout, as Hillsdale County Sheriff Tim Parker explicitly told the News his office has never enforced Whitmer’s COVID-19 orders and would not ticket people at the graduation ceremonies. Even if it thought enforcing her orders was a “top priority,” Parker’s office doesn’t have the “manpower” to single out Hillsdale for enforcement, he said.

The college published at least four press releases on COVID-19 precautions around graduation and the legality of the in-person ceremonies under both Whitmer’s orders and the federal and state constitutions.

The first on Thursday said it had consulted with “health officials, epidemiologists, city officials, state government, and law enforcement officials,” including Whitmer’s office starting on June 12, more than a month ahead of the rescheduled commencement.

MORE: Hillsdale announces fall reopening: ‘We are beings in motion’

The county’s prosecuting attorney also told the college that its commencement activities were “protected by the U.S. Constitution and Michigan Constitution,” and that Whitmer’s order makes a specific exemption for “constitutionally protected conduct” such as attending commencement, Hillsdale said.

Another on Thursday laid out the First Amendment justification for commencement and the many health and safety precautions Hillsdale was implementing:

Hillsdale College’s Commencement is an “expressive activity” protected by the First Amendment. It is a ceremony rich with symbolism and meaning. Since 1856, the College has exercised those rights by holding annual commencement exercises–including during the Civil War, World War I, the 1918 Pandemic, the Great Depression, and World War II. Despite the trauma of those times, which have been particularly severe on this campus, Hillsdale College has stood by the ceremony as the culminating meaning of the work of the College and as indispensable to its mission.

On Friday it said four “renowned epidemiologists” had consulted with the college on its commencement plans, including Stanford University’s Jay Bhattacharya, whose early research suggested COVID-19 was far less lethal than thought and who has criticized testing practices as likely to overestimate deaths:

“If the private benefits of the event are important enough relative to the public health risks and care is taken by event organizers to minimize those risks by adhering to the extent possible to safe practice guidelines promulgated by public health authorities, then the event should receive approval by public health experts,” Bhattacharya writes.

“The Hillsdale plan adheres to [CDC and WHO] guidelines to a much greater extent than other similar gatherings,” he continues.

Its second Friday release included a timeline of its commencement discussions with government officials since June 12 and a legal analysis of its plan.

Hillsdale got in a dig at Whitmer by alluding to the governor’s participation in a June 4 Black Lives Matter march where she kneeled shoulder-to-shoulder with others:

The governor took part in one herself (which did not comply with CDC guidelines), and afterwards, her spokesperson said that was an appropriate thing for the governor to do because it had been an expressive First Amendment event. We agree.

Social distancing is critical to stop the spread of COVID-19—unless you have a great photo op. ⁦And control. pic.twitter.com/uFyM6gBWaM

The News said Whitmer’s march featured “little social distancing,” as evidenced by many photos that show Whitmer and others crammed together, but her spokesperson claimed the governor did not violate her own order because she “took precautions for engaging in an outdoor activity, including wearing a mask even though it is not required outdoors under the order.”

The newspaper explained the incongruence between the spokesperson’s constitutional defense of Whitmer’s participation in the march and the governor’s actual behavior at the march, relative to her own order:

However, a page of frequently asked questions about the order on the governor’s website specifically says, “Persons may engage in expressive activities protected by the First Amendment within the State of Michigan but must adhere to social distancing measures recommended by the Centers for Disease Control and Prevention, including remaining at least six feet from people from outside the person’s household.”

In Hillsdale’s final press release, its general counsel says its plans for commencement were “not an act of defiance—this is totally legal.” Unlike the governor’s behavior at the June 4 march, Hillsdale is “not only following” Whitmer’s guidelines, but “exceeding them.”

The college noted that Whitmer and Nessel both refused to tell Hillsdale in the weeks leading up to commencement what was illegal in its plans. That’s when it asked the local prosecuting attorney, Neal Brady, whether he would “prosecute Hillsdale or interfere with commencement.”

Brady responded that he would not because the college’s plans “plainly” would not violate the executive order, which exempts “constitutionally protected conduct” such as the “expressive activities” inherent to commencement.