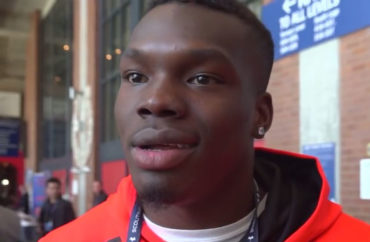 Neighbors cheer as he drags an ‘iron sled’ through town

Keith Mumphery left a lot of money on the table in order to pursue the NFL career that Michigan State University stole from him with a kangaroo-court conviction.

If he had instead pursued a federal trial and reached a massive settlement, “it would have eaten at me for the rest of my life,” the football player told New York Times sports columnist Michael Powell in a heartening feature on Mumphery’s ongoing “comeback.”

Quick reminder: MSU initially cleared Mumphery of sexual misconduct allegations by a hookup who claimed to be too drunk to consent. Police said she was walking with a “steady gait” and no trouble staying balanced on surveillance video, however. Mumphery said she freaked out when he tried to put on a condom, and that he left out of fear that this white stranger would call the police on a big, bad, black man.

The taxpayer-funded star chamber convicted him without ever talking to him or collecting new evidence. The Texans dumped him and MSU threatened to arrest him if he came back to campus.

A federal judge approved a settlement between Mumphery and MSU last month, whose terms were undisclosed. While Powell’s feature makes clear that he received a financial payout, the most important thing is that the university wiped his record clean, meaning NFL teams might consider him again.

MORE: Michigan State drags out lawsuit so it can keep persecuting Mumphery

The column sheds light on why Mumphery took the deal before any substantive decisions in the lawsuit, and how he trained to make his return to the NFL:

Michigan State offered him not a whisper of apology.

“I felt like they owed me an apology, but I can’t dwell on that,” Mumphery said recently in a telephone interview. “I have a life I want to live. I want to get back to football, and there is no time to waste.” …

Michigan State had resisted settlement despite the manifest weaknesses in its case, such as the failure to contact the accused. Mumphery and his lawyer, Andrew Miltenberg, traveled to Grand Rapids for a mediation session. By chance, his old football teammates had gathered at the same motel for a reunion. Mumphery wanted to cover his face.

“I felt like an outcast,” he said. “I’m like, man, how is everyone going to look at me based on what they’ve heard?”

One by one his former teammates saw and embraced him. “They knew my character,” he said.

Mumphery went back to Georgia to live in a trailer with his mother after Michigan State violated the most basic requirements of justice in order to destroy him. He didn’t let it get him down:

Back in his hometown, a place with a single traffic light, he strapped himself to an iron sled and ran pulling it through the streets, cheered on by neighbors.

His was a threadbare childhood. When his mother ran short of cash and the utility shut off the water, he and his siblings filled buckets at a gas station and teetered home. Had he pursued his lawsuit against Michigan State, he might well have reaped a larger financial settlement. But trials have a long gestation, and a third year away from football would have placed his dreams beyond reach. …

“They were testing us, and Keith left a lot of money on the table,” [Miltenberg] told me in a joint phone call with Mumphery. “But I’ve never seen a young man so determined to prove his innocence and live a life of character.”