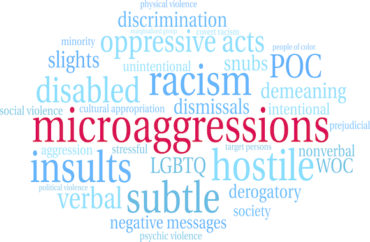 Over a decade after it went mainstream, academic sees value in microaggression theory

Derald Sue, a professor at Columbia University and one of the principal popularizers of the concept of “microaggressions,” recently stressed that “not everything is a microaggression,” and that such exchanges “have to be seen in context.” Yet the professor emphasized that the theory of microaggressions continues to be valuable and relevant today.

A “microaggression” is defined as “a comment or action that subtly and often unconsciously or unintentionally expresses a prejudiced attitude toward a member of a marginalized group (such as a racial minority).” The term has become popular on college campuses in recent years, with students frequently accusing each other of committing microaggressive acts, usually associated with race or sex.

In a phone interview, Sue told The College Fix that the concept did not originate with him but with a psychiatrist named Chester Pierce in the 1970s. “It was never picked up. It was almost like [Pierce] was a victim of a microaggression. They didn’t think his work was valuable and wasn’t considered something that was worthy of social scientific studies,” he said.

Sue himself would pick up the work several decades later. “One reason I think people didn’t pick it up was because there wasn’t a taxonomy or classification system that directly explained the types of microaggressions, what they looked like, their harmful impact, and what went on in the heads of both perpetrators and targets,” he said.

“Once we were able to publish that in 2007 in American Psychologist, people picked it up everywhere.”

‘Not everything is a microaggression’

The private school Simmons College even released a guide to microaggressions for students that stated saying “God bless you” after someone sneezes counts as a microaggression. The list said that the phrase “conveys one’s perception that everyone is Christian or believes in God.”

Though Sue stressed the real and pervasive nature of microaggressions generally, he said of these odder examples: “Not everything is a microaggression.”

Sue drew a comparison between the broadening of what constitutes a microaggression and the popularized work of Sigmund Freud in the 20th century.

“Freud used a lot of symbolism, like phallic symbols and things of that nature. And at one point people began to take everything as phallic symbols, and he had to say: ‘Even a banana could be a banana’,” Sue said.

“You have to look at why someone is saying, ‘This represents a microaggression’,” Sue said, stating that the “God bless you” example “may be going too far.”

Certain phrases are not microaggressive in specific contexts, Sue noted. For example, asking someone where they were born is considered a microaggression according to many university lists. Sue explained why the phrase itself is not a microaggression, but in the right context it can be.

“Oftentimes someone will say to me, ‘Where were you born?’ And I’ll say, ‘I was born in Portland, Oregon.’ And they’ll say, ‘No, where were you really born?’” Sue said.

“Asking me directly, ‘Where were you born?’ is not in itself a microaggression, especially if I say “I was born in Portland” and they accept it. But if they don’t, and pursue, and continue, then contextually they are seeing me as not a true American, not someone born and raised here, I’m an outsider.”

Many microaggressions, Sue said, are “outside the level of conscious awareness.”

“Often most people who engage in microaggressions are well-intentioned individuals who experience themselves as moral decent individuals who would never consciously or deliberately engage in a biased action. ” he said.

Sue said his studies have indicated that unintentional microaggressions can be more harmful than intentional ones, and minorities can experience several in one day.

“Microaggressions in the lives of people of color are constant and continual, beginning from the moment (they) awaken to when (they) go to bed,” Sue said, adding: “Well-intentioned white brothers and sisters frankly don’t understand what people of color go through on a daily basis.”

Sue said he and his academic team have been investigating the practice of “micro-interventions,” which is the process of “neutralizing microaggressions when they occur, and…educating perpetrators.”

A micro-intervention has four distinct components, according to Sue: “Making the invisible visible,” “educating the perpetrator,” “disarming microaggressions” and “seeking external intervention.”

“Those are the things we’re working on now in terms of what well-intentioned individuals can do to help end microaggressions,” Sue said.

According to Sue, many of those who commit microaggressions are also, in some way, victims of them.

“No one was born and raised in the United States wanting to be a bigot, to be a racist, to be sexist. We took this on through a painful process of cultural conditioning, which we were told by significant others, by institutions, even by a biased curriculum, who are desirable people and who aren’t,” he said.

“What I generally say here is that majority group people, white people, are equally victimized to occupy and accept biases, and their role and responsibility is to really overcome those biases,” he added.

MORE: School of Medicine will be fighting microaggressions for ‘years to come’