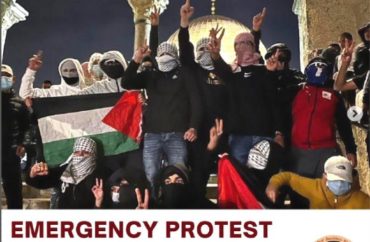 Prosecutors charged a recent alumnus of the University of Illinois at Urbana-Champaign with a hate crime after he allegedly threw a rock during an anti-Israel protest at the Hillel center.

The Daily Illini obtained the charging documents but did not link to them in its article. The College Fix has requested the documents from the Champaign County prosecutor’s office.

The Fix obtained a police report that detailed how the police identified Quraishi from security tapes of the April 18 “emergency protest” organized by Students for Justice in Palestine.

“Zionist militia forces have once again raided Al-Aqsa mosque, brutalizing and detaining hundreds of worshippers during the holy month of Ramadan,” the Instagram post stated.

Quraishi told the officer that he was not a member of SJP, but “showed up to support SJP in the protest” and that “he is Muslim,” according to the police report. “Quraishi stated that he had friends and family members who have been killed in the war,” with reference to fighting in Israel.

When the protesters arrived at the Hillel building, Quraishi said that students were playing Israel music, laughing, cheering and dancing. He was “very offended” as it was hard to hear the speakers over the Hillel students.

“Quraishi and the other male, who he did not want to name, walked towards the end of the sidewalk and he said he picked up a pebble / small rock,” the police report stated. “He said he took off his coat so he could throw the pebble/rock to the left of the students. He stated that he did not [want] to hit anyone.”

“Quraishi stated that throwing a pebble/rock is symbolic,” the report stated. “Quraishi said…throwing a rock is like a knife or a gun here, (meaning the USA).”

When the officer asked “so to you the rock is a weapon,” the U of I alumnus said that was “not what I meant,” according to the officer’s paraphrase.

The Fix could not locate contact information for Quraishi, who deleted his LinkedIn.

The Fix reached out to SJP via email on June 16 and 22 to ask if the group condemned the incident toward the Jewish students during the group’s protest, but received no response.

The executive director of Hillel told the police that “Students for Justice in Palestine…were very hostile this school year.”

The director, whose name is redacted, told police that SJP has put up posters (below) that depicted “Palestinians throwing rocks at Israel soldiers.” The Fix contacted Erez Cohen, the listed executive director for the Hillel center, to ask for comment on Quraishi’s claim that the students were being “disrespectful.” 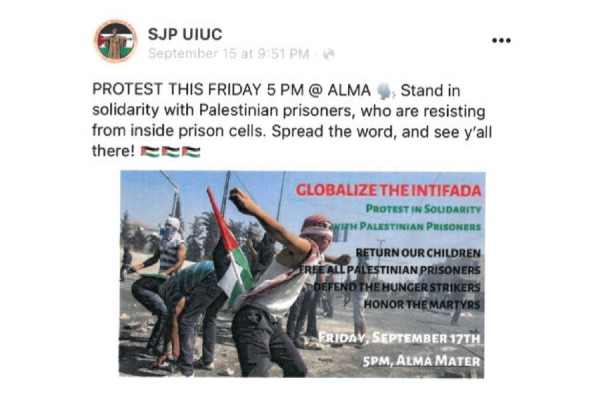 He did not respond to two requests for comment in the past week.

UIUC spokesperson Kirsten Ruby did not respond to two College Fix inquiries in the past two weeks that asked if the university condemned the incident and if it believed SJP’s protest incident violence toward Jewish students.