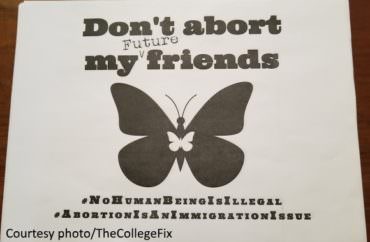 Nearly 200 pro-life posters were taken down at a Catholic university by students who were reportedly upset the posters sought to highlight similarities between the issues of abortion and immigration.

The posters included the phrases “Don’t abort my fellow humans,” “#NoHumanBeingIsIllegal,” and “#AbortionIsAnImmigrationIssue.”

The Padre Pio Society, a Catholic student group at Loyola Marymount University, had displayed scores of the anti-abortion posters across the Los Angeles campus earlier this month only to find them all removed less than two days later.

Padre Pio Society members posted them around campus on the evening of Oct. 2. They were completely gone by the morning of Oct. 4, according to Perera.

The Los Angeles Loyolan reported that one Loyola student said “we’ve been scrambling to take [the posters] down” in a comment on a Facebook photo of one of the posters.

The university did not respond to a College Fix request for comment.

The angst over this year’s posters apparently stems from their goal to “draw parallels” between the issues of abortion and illegal immigration. They had mimicked pro-immigration posters hung up on Loyola’s campus earlier this year by immigration activists.

The Padre Pio Society’s posters included the phrases “Don’t abort my fellow humans,” “#NoHumanBeingIsIllegal,” “#AbortionIsAnImmigrationIssue” as well as the image of a butterfly. The pro-immigration posters also included a butterfly, stating “Don’t deport my friends” and “#NoHumanBeingisIllegal.”

Perera said students “did not like that the posters were created to look like” the pro-immigration posters, but said the group used the similar design to highlight how the two issues are connected.

“As Catholics, we believe that all lives are valuable and should be protected. They said that we were plagiarizing them, but the posters were meant to draw parallels between the two issues,” he said. “They wanted to take them down because they did not like the message and felt that they were doing the right thing in taking down something that they disagreed with.”

The design of the posters was the brainchild of the group’s faculty advisor, philosophy Professor Christopher Kaczor. Perera said his group wanted posters “that would provoke” those who happened upon them. He thought the design was pertinent because many students on the Jesuit campus are passionate about supporting immigration rights but fewer support the pro-life cause.

Both Perera and Kaczor said the removed posters highlight a disregard for free expression on Loyola’s campus.

“This event has shown that there are some people on this campus who do not value free speech and they try to censor speech that they do not like by branding it as something else,” Perera said.

Kaczor told The Loyolan that “rather than engage the argument that all human beings deserve basic rights, the critics of [the] pro-life view attempt to stifle the free exchange of ideas.”

In addition to the disregard to free speech, Perera said there’s resentment on campus toward the pro-life movement. It’s a reason why the Padre Pio Society was formed.

“Even though [Loyola] is labeled as a Catholic school, there are many faculty and students who are not welcoming to students who want to express their Catholic faith,” he said.

A 2014 campus survey found “conservative Catholics feel they are in an environment that is hostile to what they feel are true Catholic values,” according to The Loyolan.

The incident is not the first time the Padre Pio Society has had its posters vandalized. Pro-life posters put up last year by the group were also removed shortly after they went up, Perera said.

MORE: Muslim students thought to be most frequent users of Loyola’s ‘reflection space’