Nearly 40 percent of graduating college seniors feel unprepared for their future careers, according to a recent survey.

What’s more, the survey found that students going into college as freshmen felt more prepared for a career than graduating seniors leaving with a degree.

The LendEDU-College Pulse survey found that 36 percent of seniors don’t feel prepared for their career, compared to 20 percent of freshmen, noting as students “move through college and get closer to graduating, they lose confidence in their career outlook.”

The survey, conducted between December and mid-March, asked 7,749 college students: “Do you think that college is sufficiently preparing you for your future career?” 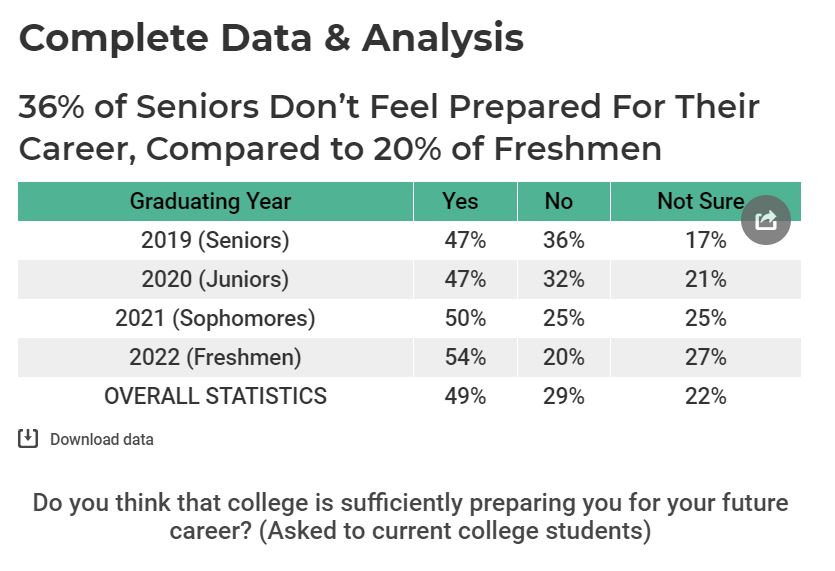 Mike Brown, a spokesman for LendEDU, said these stats should urge campus leaders to make changes.

“Hopefully it can influence them, saying you know, ‘Maybe we’re not doing enough for students once they are getting closer to graduation, maybe we should do more and be proactive in our outreach to students, especially upperclassmen, trying to see if they are ready,’” Brown told The College Fix in a telephone interview.

Brown outlined ways colleges can help students be better prepared. In an article, he wrote that students could benefit from mandatory classes that address life after graduation, work-study programs, financial classes that focus on taxes, budgeting and proper credit card use, as well as proactive career centers.

Brown told The Fix that to fully understand the problem, more research would be necessary.

“I don’t really know how much focus college administrators and career centers put into getting their students ready for the working world,” he said. “I think you would need to do a more comprehensive study on individual college career centers and departments and seeing if they are really helping.”

The survey includes a list of 69 schools and their ranking. In order to be a part of the list, the school had to have answers from at least 30 students.

Brown writes why there may be a reason for such a gap in the classes.

“It is natural for undergraduates to become more insecure about their life after graduation as they evolve from freshmen to seniors,” he wrote. “As the graduation countdown clock ticks closer to zero, students think more and more about the ‘real world’ and fear can kick in if the career map looks barren.”

Brown told The Fix this is an important topic.

MORE: This one graph shows why the higher ed bubble may be bursting