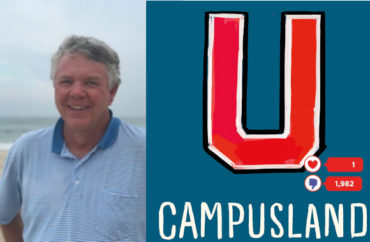 The College Fix: Why write the book?

Scott Johnston: Because no one else had.

I’ll tell you how it came about. I had never been a novelist, but about three years ago I went to a free-speech conference at Yale – mind you, it wasn’t sponsored by Yale, they wouldn’t sponsor such a thing – but it was held there, sponsored by the William F. Buckley society. And 200 protesters, students, showed up and tried to physically shut the conference down, having skipped irony class that day probably to show up and protest.

I was stunned. There was security there that kept them out, but when the thing was over, I and everyone else walked out through this phalanx of shouting students, and that’s when I began to wonder – college is getting so crazy, why hasn’t anybody sort of given this the Tom Wolfe treatment? The satirical wit treatment? Because it’s pretty ripe for it.

So I just started knocking it around in my head. But I wasn’t a fiction writer.

Then fast forward to my college reunion, also at Yale, and I was holding a door open for a girl who I think was an undergraduate who was working the reunions, and she stopped dead in her tracks and she looked at me and said, “patriarchy!” She accused me of patriarchy and wouldn’t go through the door. And we had this standoff for about a minute.

Literally at that moment, I said, “alright, I’ll figure out how to write the goddamn thing.” So I just started writing, and had no idea how to find a publisher or anything, but it all worked out well.

CF: So the book is basically “ripped from the headlines” – you just mentioned a couple things that you experienced that inspired it. Most of the events in the books are things that actually happened. Are there other specific incidents you drew on?

SJ: Oh, there’s plenty. I mean, there’s the Harvard clubs that are single-sex that are not part of Harvard at all in any legal sense, but they’re still being threatened by the university. There are lots of stories in there – some of the fraternity stories are based on stuff I know. The story about the guy who does the whole art project on “Circa” – that’s a real story. I knew the guy. (In the book, one of the dumber characters has to write an art history report, and looking at a label below a painting in a gallery, he decides to choose the artist “Circa.”)

Even the game the fraternity guys play where they spit on the ceiling and then try to catch it – that was the Harvard swim team. So there’s a whole lot that comes from reality.

And, of course, the major inspiration comes from Yale. It’s not 100 percent literally about Yale, but it’s easiest to fall back on the experience that you know when you’re writing. Certainly there are a lot of similarities between some of the characters and some real people at Yale, and I drew a bit on my own fraternity experience.

There’s a whole lot in there that comes from the real world. And some stuff I just made up.

CF: To me, one of the main themes of the book is that it’s really the adults on college campuses that are failing us – the students are going to do what they do, but it’s a lack of grown-up supervision that has caused a decline in modern universities. Is this a theme of the book, and what do we do to fix it?

SJ: I think there’s blame to go around, to be honest. The Yales of the world have gone out of their way to find the sort of students who make this sort of trouble to populate their freshman classes. They go out of their way to accept all these social justice warriors, who by the way, give no money when they graduate. So it’s going to bite them in the ass in terms of giving – I think it already is.

They’re almost like co-conspirators. There’s no voice of reason on either side of the equation. Just look at the Title IX abuses, which I write a lot about. Betsy DeVos has basically said, “you can dismantle this now – you need to give boys due process.”

Well, after the Obama “Dear Colleague” letter, all these colleges built this enormous machinery to deal with it, and they have no particular interest in dismantling that machinery. They’ve hired all the bodies, and frankly, philosophically, they kind of like it.

So, anyway, I think there’s blame to go around. I think the students are awful and I think the administrators are awful, and the conservative students have basically learned how to hide. You’ll notice there really was not a single conservative in the book, which is illustrative of the fact that conservatives really play no role in college campuses now. Everyone in the book is some shade of progressive, maybe with exception of the monarchists, but they’re more like cartoon characters.

CF: I did read one review of the book that offered just the hint of criticism – it said your book leaves out any actual examples of people who have been affected by racism or sexual abuse. Why didn’t you think a reference to actual harms was necessary?

The reason I didn’t address it more is because…oh my God is it addressed a lot. It didn’t need my voice to add to that.

What’s not addressed as much are all the boys getting the shaft from false accusations. The equation was out of balance. And it’s satire. Although, honestly, it’s not very satirical.
In fact, it was almost a challenge satirizing something that is already pretty self-satirical. It’s ludicrous what is going on in colleges right now.

And that’s why I could basically take a lot of real stories and make them into a novel that seems
hysterical.

People have been reviewing the book on Goodreads.com and one person, who is obviously an educator, said, “you know, this is satire, but honestly, a lot of things that would have been the province of The Onion ten years ago now are absolutely real, and so maybe Campusland is only three years ahead of the curve.”

CF: At one point in the book, you touched on one of my pet peeves, which is the legal drinking age. Do you think we should go back to 18 years old to drink?

SJ: I just wrote an op-ed about it in the New York Post on Sunday. I absolutely do.

I had almost a little editorial in the book on that. The increase in the drinking age has had a lot of unintended consequences.

One of them is it has definitely destroyed the culture on campuses. Taking Yale as an example – Yale used to have this big, open, egalitarian social system that centered around the residential colleges. And it was really fun and open to everybody. There were only a couple of fraternities while I was there – I was in one of them – but it was kind of an afterthought.

As soon as the drinking age went up, the college social life thing shut down and a bunch of fraternities and sororities sprouted up off-campus and everybody sort of self-segregated along demographic lines, which is totally not what these social engineers had in mind.

Things got very cliquey and balkanized. And that’s really one of the themes of the book, too – college is a bunch of tribes now.

I have a political angle [on raising the drinking age], and it’s that the GOP should be the ones out in front on this, because the GOP’s brand is terrible with Millennials. It’s sort of an image thing, because they’re seen as the party of old people and stiffs. If they could suddenly be the champions of the lower drinking age, that is a whole new world of coolness.

Basically, the federal government is sticking their nose where they shouldn’t on this.

CF: So what on campus needs to change? Who needs to be the voice out there convincing everyone this is all crazy?

SJ: Honestly, I don’t think colleges are fixable at this point. There are a lot of people working on it – great people like Robby George at Princeton who’s starting an effort that’s metastasizing around college campuses.

But the progressive left have so thoroughly occupied the center of gravity in every university, with only a couple exceptions – my daughter is at the Naval Academy, that would be one – that I don’t think there’s any fixing it.

And they’re so self-reinforcing, they don’t even realize that they’re crazy and out of the mainstream. I actually have a friend who’s working on a project and he’s fleshing out the numbers – he’s trying to raise money to start a de novo university that I wouldn’t even call “conservative” – let’s just say it would be “normal.”

It would be like universities used to be, where you would have liberal professors and conservative professors and you’d welcome all viewpoints, and you would have no majors that end in the word “studies.” You’d have administrations that were one-quarter the size of something like the Yale administration, which would enable you to charge much lower tuition rates. You’d accept no federal government money, because that’s where you get in trouble with a lot of this stuff.

So, there are those who think – and I think I’m one of them – that you really have to go back to the drawing board.

Campusland will be available from St. Martin’s Press on August 13, 2019.