General support for the First Amendment has modestly increased among high school students in the past 15 years, but not across all demographics, according to a report released last week by the Knight Foundation.

Yet nonwhite students are the only demographic to see a slight decrease in support since 2004: Girls, boys, and white students all saw increased support.

Notably, students who have taken classes involving the First Amendment were more likely than others to support its various rights and protections, according to Knight, a nonprofit that promotes journalism.

Around two-thirds of students reported taking classes that touched on the First Amendment. This number has remained relatively steady over time, even though the gap in support has narrowed over time between those taking these classes and those not.

The College Fix could not arrange an interview with report author Evette Alexander, Knight Foundation director for learning and impact, before this article was published.

Only ‘strongly disagree’ answer is for flag desecration

Students have been asked about wider cultural issues surrounding the First Amendment since the survey’s inception in 2004. They include offensive song lyrics, public offensive speech and the responsibilities of social media companies.

According to the report, students tend to “mildly agree” with support for First Amendment protection of these areas on average. The only topic in which average support for the First Amendment dips into “strongly disagree” is flag burning and desecration.

On this subject of the flag, views started to diverge by race in 2016, with students of color much more likely to be milder in their disagreement with flag desecration.

The report speculates this could be a result of growing support for movements such as Black Lives Matter and for professional athletes kneeling during the national anthem. Nonwhite students are significantly more likely than their white counterparts to support the First Amendment right of athletes to kneel.

More ambiguously, news consumption was not a reliable predictor of support for the First Amendment. This may be a result of the survey’s apparent failure to ask respondents what type of news they consume.

While news consumption did not necessarily predict support, “students who reported often using social media in the 2018 survey were significantly more supportive of specific First Amendment rights and protections,” the survey found. 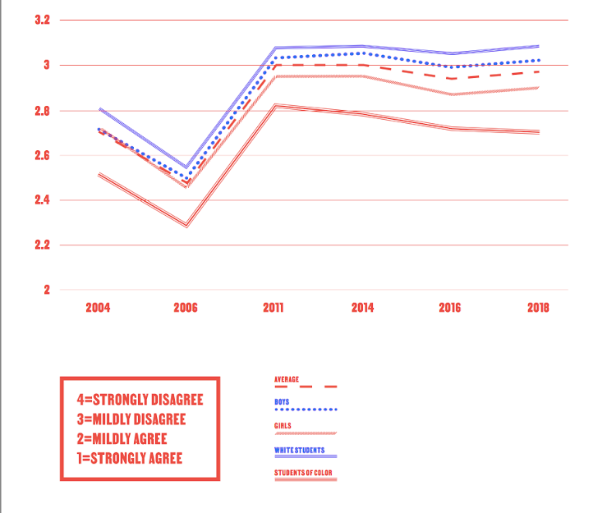 The report concludes that the divide is growing between students of color and white students. Both the gender and race gaps on the survey did not begin to show growth until around 2011.

Interestingly, the average opinions of white students have remained relatively stable, with students of color becoming increasingly less supportive of the First Amendment’s rights and protections.

The report found a modest increase in average disagreement with the statement “the first amendment goes too far in its rights and guarantees,” except for an unexplained “sharp decline” around 2006.

Overall opinions were steady between 2004-2006 and then again from 2011-2018. Between 2006 and 2011, however, there was a sharp drop and then a quick buildup back to general support for the First Amendment’s protections.

The report suggests the racial divisions can be partially explained by a contentious 2016 election and associated “anti-immigrant, misogynistic and ethnic nationalist rhetoric.” It cited the “Unite the Right” rally in Charlottesville in 2017 and mass shootings in El Paso, Texas, and Dayton, Ohio, this summer as having likely effects.

What the Northeast and the South share in common

The Knight Foundation’s press release notes that this divide beginning in 2011 correlates with the widespread adoption of social media. In a previous survey from 2018, 82 percent of college students believed that social media has led to an increase in hate speech.

When it comes to bullying, hate speech and other uses of social media involving the First Amendment, girls are more likely than boys to support government or school intervention.

Overall, students generally disagree with schools getting involved in First Amendment issues outside of the bounds of school, but the same gender and race gaps exist. Minorities and girls tend to agree with schools punishing offensive behavior, while boys and white students tend to disagree.

“Since 2004, the Northeast and South have become more similar, as have the Midwest and West,” in terms of attitudes towards the First Amendment, according to the report.

Opinions on the survey’s statement tend to show a divide between the East Coast and West Coast, as opposed to North and South. The “north vs. south” political belief – that the former is liberal and the latter is conservative – does not play out in the results of the survey.

The South is perplexing in this survey because it’s largely red states with conservative values, but here they tend to agree that the First Amendment goes too far.