Following a firm statement from the school president that campus police will remain, student activists at Northwestern University aren’t backing down from their demand that the police department be disbanded.

On Saturday, the activists — who dub themselves “NU Community Not Cops” — trashed several buildings and other properties by breaking windows and spraying graffiti, including the Northwestern Police headquarters and a local Whole Foods.

The vandalism included “F–k 12,” “ACAB,” “Abolition is the Solution,” and “other anti-capitalist messages” according to The Daily Northwestern.

In addition, a banner stating “We’re N This Together” hanging at the school’s Weber Arch was set aflame late that night. Not noted by the DN is that the arch also was defaced with the messages “More dead pigs,” “F*** UCPD,” “Suck my dick” and what appears to be the Arabic word for “Allah.” 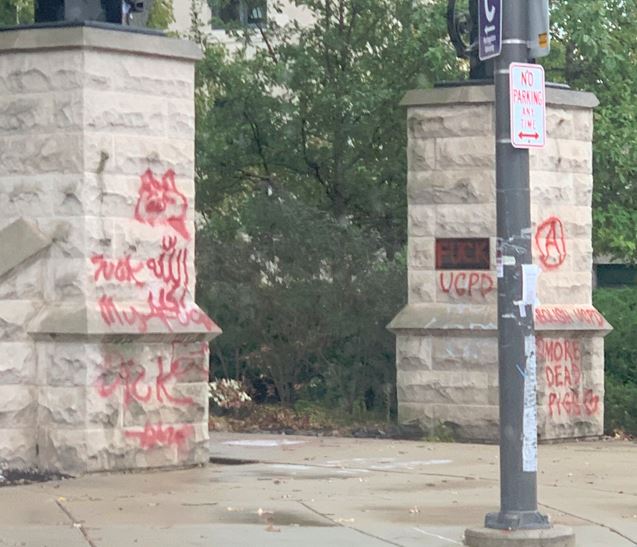 During the demonstration, comments from NU Community Not Cops activists included “This is the first time [I’ve] felt supported by wealthy White students,” and “When I say Evanston [NU’s hometown] is the most racist place I’ve ever lived, I’m not exaggerating.”

Though demonstration participants had engaged in unlawful conduct, some had the temerity to complain about “harassment” — people taking “unwanted” photos, heckling, and one man who dared to stand at an opposite street corner holding an American flag.

Saturday’s protest ended at Northwestern President Morton Schapiro‘s house where a NU Community Not Cops leader told the crowd “Do not forget what abolition is. Yes, it means no cops. Yes, it means no law enforcement.” Police would be replaced by community members “hold[ing] each other accountable.”

Schapiro responded forcefully to the activists in a Monday email, stating Northwestern has “absolutely no intention” of dismantling its police department. He also blasted the antics of NU Community Not Cops during the Saturday demonstration(s).

“I condemn, in the strongest possible terms, the overstepping of the protesters,” Schapiro wrote. “They have no right to menace members of our academic and surrounding communities.”

Schapiro alleged that protesters calling him a “pig” had bordered on anti-Semitism, as such is a “longstanding trope against observant Jews.”

Lastly, he said anyone found to have broken the law “will be held accountable”:

If you haven’t yet gotten my point, I am disgusted by those who chose to disgrace this University in such a fashion. To those protesters and their supporters who justify such actions, I ask you to take a long hard look in the mirror and realize that this isn’t actually ‘speaking truth to power’ or furthering your cause. It is an abomination and you should be ashamed of yourselves.

In response, NU Community Not Cops showed up at Schapiro’s residence Monday night to demand his resignation. In a statement, the group said

As a wealthy white man, Morton Schapiro knows that he holds an immense amount of privilege that those facing impending threats of “personal attacks” do not, as he mobilized the police to do what they are meant to do — protect white property and white lives.

The activists also doubled down on the president’s remarks about “pigs” noting, while they apologize to Jewish community members who may have been offended by the term, Schapiro is exempt:

False claims of anti-Semitism have been used throughout Northwestern’s history to shut down student activists, especially Palestinian activists, and to divide coalitions by falsely claiming that anti-Zionism is anti-Semitism. Because of the pervasive myths of colonialism and white supremacy, we find ourselves having to repeat: anti-Zionism is not anti-Semitism. We continue to stand in solidarity with Palestinian liberation by our shared virtue of abolition.

(In a Tuesday tweet, NU Community Not Cops noted it also advocates a Palestinian right of return.)

The Monday night Schapiro protest ended with pizza provided by NU Community Not Cops, and black participants got first dibs: “Black people to the front. If you are Black, go to the front.”

The group will be at it again Tuesday for a “community dialogue,” according to NU Community Not Cops’ Twitter feed.

Faculty in the African American Studies department responded to Schapiro on Tuesday, stating they were “extraordinarily troubled” by his email: “It is only when your own pleasant suburban life was disrupted by student protestors that your expression of outrage and dismay to our University community rose to a level beyond the banal, the tepid and the timid.”

The professors were miffed at the president’s “prompt and strongly worded denunciation” of the NU Community Not Cops activists — who they claim were “nonviolent” — and noted Schapiro send emails when the Women’s Center was Zoombombed, and when President Trump criticized Critical Race Theory.