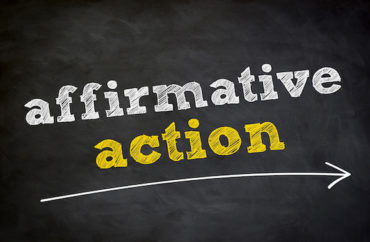 College Republicans at the University of Washington held an “affirmative action bake sale” last week, voicing their opposition to a new law that allows affirmative action policies at public universities in the state. The bake sale generated controversy and even a rebuke from the school’s president.

The Washington state legislature last week reversed a decades-old anti-discrimination law, revoking a ban on affirmative action and once more permitting schools to factor race and sex into their admission policies.

Initiative 1000 overturns a 1998 law, Initiative 200, which prohibited “government entities from discriminating or granting preferential treatment based on race, sex, color, ethnicity, or national origin.” The text of the now defunct I-200 legislation clarifies that public universities and colleges were included under these regulations.

Affirmative action is the process by which officials consider factors like skin color and sex when making admission and hiring decisions. Initiative 200 insisted on blind admissions policies for public entities; now, under the new rule, schools may admit individual students in part because of the color of their skin.

To underscore the basic facts of affirmative action policy, College Republicans at the University of Washington held an “Affirmative Action Bake Sale” on their campus following the passage of the law.

The Stranger reported that the Republicans priced the baked goods according to an ethnic hierarchy of sorts. Native Americans, for instance, were charged nothing for cookies; all women, meanwhile, got 25 percent off. Asians had to pay $1.50 for their snack, the highest of the prices.

According to The Stranger, there was some confusion by what the event meant. One professor who attended said that the display constituted “harassment,” and that the event organizers were claiming that “African American lives are worth 50 cents.” (The school’s president, Ana Mari Cauce, offered a similarly confused assessment of the bake sale; in an interview with The Chronicle of Higher Education Cauce said that the sale presented “an allusion that different people were worth different amounts.”)

One of the event organizers said that at one point campus police “had to step in and stop aggressive protesters.”

“At one point one girl came up to cookies we had, smashed them on the ground in the middle of the crowd… another person took the phone of someone who had a MAGA hat at the event… there were a lot of people yelling at us,” Chevy Swanson, the president of the Republican group, told The College Fix.

Swanson claimed that, before the event, the school’s administration was working in opposition to it. He said that “deans of schools said the event shouldn’t be allowed, and that protests should be planned with their help.”

Swanson added that, after the event, “multiple school officials made public comments to media calling [the College Republicans] racist.” The conservative campus group has catalogued some of those statements by school administrators on the group’s Facebook page. One, an email from Information School Dean Anind Dey, calls the Republicans’ event “hateful” and “harmful,” and encouraged students to not attend it.

“It does seem very out of line for a lot of these University administrators to be making judgement calls and calls to protest and really heavy claims from their university emails to their university mailing list [and] to their students. I think it absolutely constitutes an abuse of power,” Swanson said.

In the end the College Republicans were pleased with the outcome of the bake sale. “We were very happy with how the event went. This is probably one of our best events,” Swanson said, stating that it catalyzed an important discussion on affirmative action and the new law.

Rather unsurprisingly, the votes on Initiative 1000 fell almost entirely along party lines. Only three Democrats in the legislature crossed over to vote against the measure, which was opposed by all Republicans there.

A spokesman for state senator Mark Mullet, one of the two Senate Democrats who voted against I-1000, said that the senator believes that this issue should be taken to public referendum.

“My opinion is that voters passed 1-200 back in 1998 and it should be up to them to make that decision, not the Legislature,” Mullet said earlier this year, according to the spokesman.

Others apart from Republicans have opposed the new rule. The editorial board of the Tacoma News Tribune came out against the initiative, telling the legislature that it should “let Washington voters debate [and] decide on affirmative action” by putting the law to a referendum.