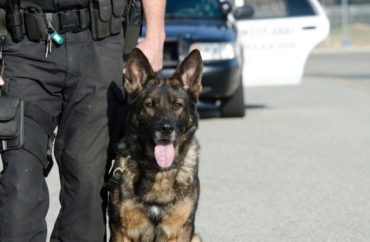 The African-American studies professor spoke on “The Racist History of Interspecies Policing in American History.” He has published a body of research on white people using dogs to “enact racist violence against marginalized populations,” including by police officers today.

It was the only event on the agenda to actually name the subject of research. The Office of Student Research, which puts on Research Week, did not answer a request for comment after a university spokesperson referred The College Fix to that office.

The Fix was unable to obtain a video of the keynote, and the spokesperson said there may not be one. But Parry offered insight into his peer-reviewed journal articles in an email to The Fix.

MORE: Students at women’s college tells peers not to call cops on blacks

The scholar said dogs “have been used to enact racist violence … specifically [against] people of African descent,” but that doesn’t mean dogs are racist.

“I do not argue that dogs can be trained to be racist, especially not in the way that humans understand race or racial difference,” Parry said. “But the available records show that dog trainers have historically applied different techniques in their hope to condition canines to act upon certain triggers.”

Parry isn’t the first scholar to wonder whether dogs can display racist behavior.

Psychology Today reviewed research on the racist-dog theory three years ago. It suggests that dogs read the “subtle emotional cues” of their owners when strangers approach.

If the owner stands still or retreats from a certain kind of stranger often enough, such as young black men, the dog can build a prejudice toward that kind of person.

CSU-Fullerton police use a ‘sensitive’ breed

But Parry also focuses on how breeding plays a crucial role in law enforcement.

Though no specific breed is “inherently guilty for how their ancestors were used by racists,” he said police departments should “apply caution when selecting their preferred dogs”:

African Americans are historically cautious of German Shepherds, the quintessential “Police Dog,” when used in K-9 units. The images of these dogs attacking peaceful Civil Rights protestors, and for that matter, other shepherd breeds mauling Black people throughout the African continent as they challenged colonialism, produces a deep distrust between populations of African descent and police forces, especially when handlers are white men.

Parry’s recommendation flies in the face of conventional wisdom on which breeds are best for police work.

The dog-supply retailer SitStay.com, which focuses on the “working dog” market, says that a “protection breed” should be sturdy yet fast enough to “outrun a perp and still be able to listen to commands.”

German shepherds excel at this work, according to the website, which decrees them the best police dogs: “This is also an incredibly loyal and easily trained breed which means they will work well with their partner … It’s hard to beat the versatility this dog has.”

Parry noted that his university’s police department chose a “sensitive” breed for its bomb-sniffing dog, a black labrador, “due to the sensitive nature of canine policing.” He didn’t recommend any other specific breed for police departments to use.

American Labrador is ranked sixth on the SitStay.com list of best police breeds, which emphasizes the breed’s history as a “hunting partner” and its sense of smell. They can be a “top-notch narcotics detection dog.”

Slaves forced to abuse dogs so they’d be ‘inherent enemies’

History, Parry told The Fix, “demonstrates a troubling legacy of how dogs have been used and manipulated to accomplish the violent and racist subjugation of marginalized populations, specifically people of African descent.”

The use of dogs for racist ends has evolved over time, Parry argues. Originally it was white slave owners who used canines to hunt down fugitive slaves and trained them to using a variety of techniques.

Former slaves shared the methods that a “white dog handler” required them to use so the dogs would view blacks as “their inherent enemies,” Parry said. They were forced to “either physically abuse the dogs for a series of months, or they withheld food from them.”

This led the hunters of enslaved fugitives to believe “they had bred a dog that was inherently anti-black,” he continued.

The Jim Crow era continued these practices, Parry said, which now continue in police departments. He said he’s working on a book on the subject with Charlton Yingling, a University of Louisville history professor.