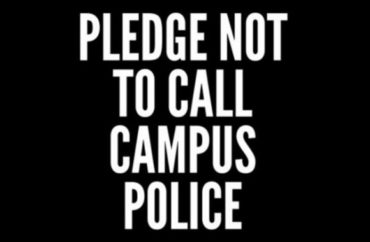 A student group at Wellesley College, an all-female university, is urging peers not to call the campus cops for non life-threatening emergencies.

The group, Wellesley Against Mass Incarceration, recently launched the new initiative along with a corresponding petition, billing it as a “pledge not to call campus police” at the preppy, private university near Boston.

In particular, Wellesley Against Mass Incarceration co-president Rachael Labes told the Wellesley News campus paper that group members “think it’s important for students to recognize that calling the police should not be taken lightly. The police are dangerous, specifically for black and latinx students and those with mental illnesses.”

Labes, in her comments to the News, said that in addition to alleged bias and safety concerns, a trend to call campus police rather than RAs to complain about noisy parties has made some students at Wellesley feel unsafe, as well as the fact that campus police may be armed.

The effort advises against students calling the campus police in non-life threatening situations, the News reports, adding roughly 400 members of the Wellesley community have signed on.

Forty percent of the college’s population of 2,300 are students of color.

Labes and other members of Wellesley Against Mass Incarceration did not respond to requests for comment from The College Fix.

A joint statement to The College Fix on Monday from the Wellesley Campus Police Department and a college spokesperson stated that the “safety of our campus community is our top priority, and we encourage students to reach out for support from our Campus Police should they have any concerns—emergent or otherwise.”

“Wellesley College encourages an environment where students are free to express their opinions, and Wellesley Against Mass Incarceration has the right to petition peacefully and seek support from their fellow students.”

In late October, the Wellesley student group had held three campus meetings to discuss its “campaign not to call campus police and why this is important,” according to its Facebook page. The events’ tagline? “Commit to student safety, uphold community standards, and understand what calling the police means.”

The one-year-old group launched last fall, with Labes telling the News at the time that as a white woman, she wanted to put her efforts in context.

“While this is a project I’m really excited and passionate about, I also recognize that this is a fight primarily for black lives and for racial justice, so I try to balance that and be an ally to this cause,” Labes said last year.

The campaign comes at a time when several high-profile incidents of white people calling campus cops on black people has created animosity and controversy.

In the spring, a complaint by a white student about about a black student sleeping in a common area at Yale University sparked massive backlash in what was dubbed the “napping while black” incident. At Harvard over the summer, “implicit bias” training was rolled out after a white staffer asked her nonwhite neighbor to be quiet. In August, outrage ensued after campus police were called on a black student eating lunch at Smith College, another all-female university in Massachusetts.

And earlier this month, “a white professor called police on a black student for putting her feet up in class,” Vox reported.

Wellesley College is not the only one at which an effort against calling the cops has been launched. At Marquette University, a student group implored “white folks” to “STOP CALLING THE COPS” during a spring semester campaign.