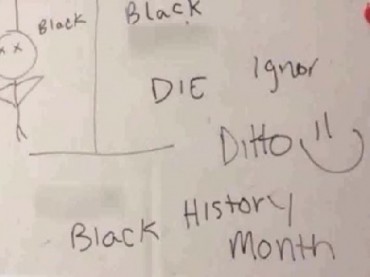 The Grand Valley State University student who found racist graffiti on her dorm room door’s whiteboard in mid-February is the same person who put it there, police have determined.

The racist message had included a stick figure in a hangman noose and the words “black b*tch die” and “f**k black history month.” (Image shown is edited)

“When the incident was initially brought to the campus’s attention, several organizations and groups were highly alarmed, prompting assemblies, discussions in the classroom and a university-wide alert to the situation,” according to the Michigan-based college’s student newspaper, the Grand Valley Lanthorn.

Turns out, the incident joins the long and growing list of campus hate-crime hoaxes across the nation.

“The person believed to be responsible for the drawing and language written on the dry erase board is a Grand Valley student and the owner of the message board,” stated Grand Valley Police Department Chief Renee Freeman on Friday. “The incident has had a disruptive impact on the community and as a result, the student has been referred to the Dean of Students for a student code violation. University policy does not permit the release of his/her name.”

However, based on the message’s wording, it seems likely the student is an African-American female.

Despite this development, a university-wide “Teach-In” prompted by bias incidents on campus is still set to take place at Grand Valley State on Wednesday, the Lanthorn reports, adding “the day-long event will feature student and faculty presentations about preventing discrimination and oppression on GVSU’s campuses.”

“It will be interesting to see if the GVSU administration uses the hoax to push an agenda, which is what happened at Oberlin,” Legal Insurrection’s William Jacobson noted.

At Oberlin, an alleged spree of “hate crimes” that took place last year turned out to be an elaborate hoax carried out by a pair of radical left-wing Democrats who are outspoken supporters of President Obama.