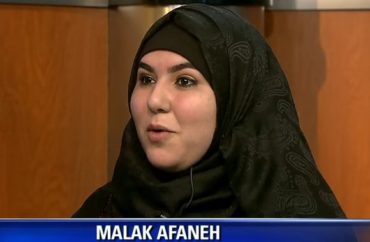 Founder of ‘Rosie the Hijabi’

The senior class president at Pomona College shared an Instagram post that called pro-Israel Jews “bitches” who “hate brown p[eo]p[l]e,” saying it “put into words all I’ve been thinking,” according to a screenshot included in a petition against the elected official.

It demands that Malak Afaneh, whose LinkedIn profile says she was elected in May, either apologize for her “antisemitic comments” or resign. Outside Pomona, Afaneh is known for creating the clothing brand Rosie the Hijabi, which says its depictions of Muslim women flexing their arms is a “symbol of Islamic feminism.”

The petition includes a letter that “we intended to send” to the Associated Students of Pomona College and the administration. Though the petition doesn’t name the person or group who created it, a deleted Facebook post (below) suggests it came from the Claremont Progressive Israel Alliance. 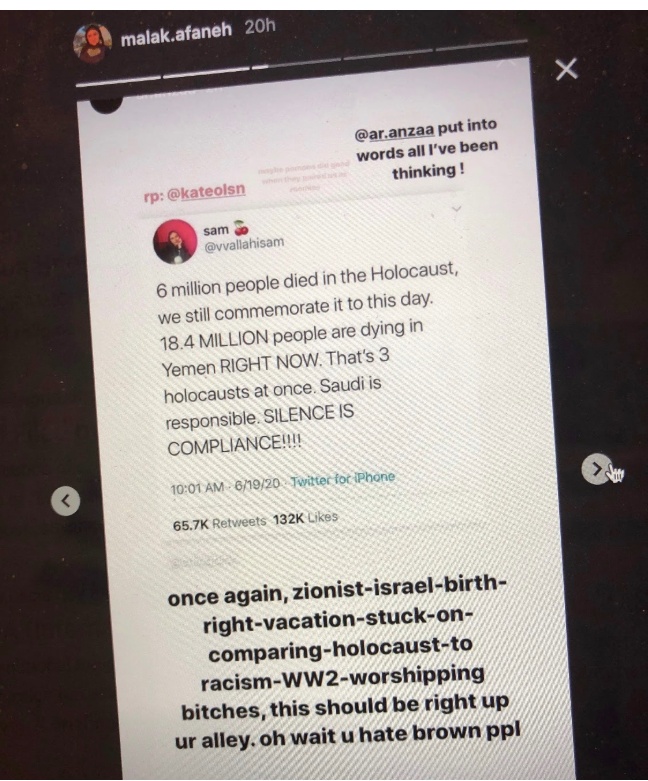 once again, zionist-israel-birth-right-vacation-stuck-on-comparing-holocaust-to-racism-WW2-worshipping bitches, this should be right up ur alley. oh wait u hate brown ppl

(The person who tweeted about Yemen later replied to apparent criticism that she was undercounting the Holocaust death toll, saying the tweet was “not meant to be antisemitic at all.”)

Afaneh’s “endorsement” of the social media comments “directly isolates and targets the Jewish students she is supposed to fairly represent,” the letter in the petition says:

Comparing racism to the Holocaust, which stands alone, and writing these kinds of comments implying Jewish people “hate brown ppl” only fuels hate and directly targets members of the Jewish community. …

[The post] deserves immediate explanation and apology, both to the campus community and to Jewish students. If Afaneh cannot offer that, she must resign her position. She is wholly unable to carry out her duties representing Jewish students if she holds these beliefs.

We are outraged that the @pomonacollege senior class president accused “Zionist-Israel-birthright-vacation-stuck-on-comparing-Holocaust-to-racism-WW2-worship[pers]” of being indifferent to the plight of the Yemenis. No one with these vile views should represent Jewish students.

The Claremont Independent translates the Instagram post as referring to Zionists, a synonym for pro-Israel Jews that is often used as a slur, and the Birthright program for young Jewish people to visit Israel.

As for the reference to hating brown people, the post is likely claiming that pro-Israel Jews must not care about Yemenis because of the long-running Israel-Palestine conflict. Most Israeli Jews “fit the definition of ‘People of Color,'” says the Independent, which covers the five Southern California colleges that make up the private Claremont Consortium, including Pomona.

Afaneh’s elected position “comes with authority over the daily affairs of student governance,” the newspaper explains. Senior class president does not appear to be a powerful position as described on the ASPC page, but Afaneh does serve on the budget committee and is tasked with working “closely” with the ASPC president.

The Claremont Progressive Israel Alliance does not currently mention the petition on its public Facebook page. It has not responded to a College Fix message to confirm that it created the petition.

Read the petition and Independent report.

UPDATE: A screenshot of the Claremont Progressive Israel Alliance sharing the petition has been added.