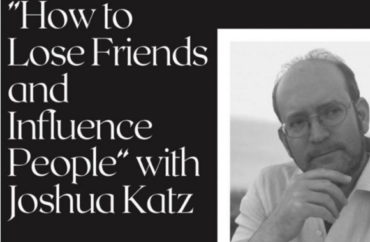 ‘I refuse to allow myself to be silenced for nonexistent crimes’

During a recent event hosted by a Yale free speech group, a highly decorated Princeton professor of 23 years defended his use of the word “terrorist” to describe a former campus activism group called the Black Justice League.

The Zoom conference on Dec. 2 was hosted by Yale University’s William F. Buckley Jr. Program and titled “How to Lose Friends and Influence People.”

During the event, Princeton classics Professor Joshua Katz defended his “Declaration of Independence,” a piece he wrote questioning some racial justice demands lodged over the summer by his fellow faculty members that accused the Ivy League institution of systemic racism.

“I believed then and I believe still now that my tone was largely measured. I did not write a hit piece,” Katz said during his talk.

During the one-hour event, Katz explained how he was targeted by campus activists, in large part for his use of the word “terrorist” to describe a defunct black student activism group at Princeton in his “Declaration of Independence.” He described it in his piece as a “small local terrorist organization.”

“I understand why some people didn’t like my description of the BJL, but I and others don’t like many things the BJL did, and I did think about the phrase before enshrining it in print,” he said.

He pointed out that the “original” terrorists were the Jacobins during the Reign of Terror. He said at Princeton, members of the BJL terrorized people who disagreed with them, including some fellow black students, through name-calling and bullying tactics.

“More to the point, we have for four years been hearing the phrase ‘President Trump is a Nazi,’ though no one who says this believes that he is a member of the American or any other Nazi party. This is metaphor at work,” he said.

To those who claim he was being imprecise or hyperbolic by using the word terrorist, Katz said they should be careful about throwing stones.

“Let me suggest that you be very careful of how you express yourselves, because if you think you can escape the woke juggernaut, you are mistaken,” he said during his talk. “The curse of misunderstanding another’s language whether willfully or not will turn on you, too, and possibly just for uttering one unorthodox syllable, or a wrong word, or — God forbid — an unfashionable idea.”

He said he is disappointed that so many colleagues focused on a single phrase in his piece rather than his larger arguments.

“I did not call students terrorists,” he said. “It’s not just that I spoke of no one by name. I said nothing about current students. I spoke about alumni … who had belonged to an organization that had not existed for four years. … When my critics continued to claim that I said things that I did not, that shows an inexcusably cavalier attitude to truth.”

The good news, he said, is that he has received an outpouring of support.

“I am in the uncomfortable position of being a pariah in my department and in my discipline but anything but a pariah everywhere else,” he said, noting the ratio is 75 to one of positive to negative messages he has received from politicians, peers, national journalists, higher education groups, and many others of all political stripes.

“It’s nice to know there is still some hope in academia,” he said, pointing out that an investigation by Princeton administrators into his piece over the summer was dropped. Katz said they had to, as the institution had in 2015 adopted the Chicago Principles of free expression.

The professor pushed back on the notion that he was ever “canceled.”

“I refuse to allow myself to be silenced for nonexistent crimes,” he said.

He said that although he is a “deeply private person” and a “library rat,” he plans to continue to work in higher education and speak freely despite the pushback and vicious name-calling he has received from some peers and an ongoing graduate student boycott of his classes.

“My interest in the rough and tumble of contemporary socio-politics is largely born of recent unfortunate necessity,” he said.

Katz said he frequently receives emails from “newly embattled” professors who are scared and looking for help or camaraderie.

Yale’s Buckley program is an intellectual integrity organization that aims to expand political discourse on college campuses beyond the traditional majority view.

Lauren Noble, founder and executive director of the Buckley program, told The College Fix via email that Katz was invited to further the group’s goal to host right-of-center conversations that might not otherwise take place at Yale.

“The Buckley Program regularly hosts speakers who question campus orthodoxies. Professor Katz is a respected scholar who follows in this tradition,” Noble said.

“The Buckley Program even hosts an annual Disinvitation Dinner for speakers who have been disinvited or disrupted on college campuses,” she added. “Our mission is to promote intellectual diversity on campus. We value independent thinking, encourage students to think for themselves, and welcome robust discussion on a wide range of topics.”

Princeton media affairs did not respond to a request for comment from The College Fix.

The faculty letter that had prompted Katz’s “Declaration of Independence” was published July 4.

The letter describes the presence of “anti-black racism” on the Princeton campus, and advocates for people of color to be given preference in filling a newly opened seat within the school’s administration, among other requests. Over 450 faculty members, Yale students, alumni and others signed the letter.

Katz, in his Declaration of Independence, supported some of the arguments in the letter, but criticized it for how it advocated for affirmative action.

“Some examples: ‘Reward the invisible work done by faculty of color with course relief and summer salary’ and ‘Faculty of color hired at the junior level should be guaranteed one additional semester of sabbatical’ and ‘Provide additional human resources for the support of junior faculty of color.’ Let’s leave aside who qualifies as ‘of color,’ though this is not a trivial point. It boggles my mind that anyone would advocate giving people—extraordinarily privileged people already, let me point out: Princeton professors—extra perks for no reason other than their pigmentation,” Katz wrote, citing the letter.

Katz also wrote in his piece about how the faculty letter asked the university to issue an apology to the Black Justice League, a former Princeton student group.

“The Black Justice League, which was active on campus from 2014 until 2016, was a small local terrorist organization that made life miserable for the many (including the many black students) who did not agree with its members’ demands,” Katz wrote.

“Recently I watched an ‘Instagram Live’ of one of its alumni leaders, who—emboldened by recent events and egged on by over 200 supporters who were baying for blood—presided over what was effectively a Struggle Session against one of his former classmates. It was one of the most evil things I have ever witnessed, and I do not say this lightly.”

Days after Katz’ declaration was published, Princeton’s student newspaper The Daily Princetonian published an op-ed signed by 91 students and alumni that denounced the professor’s piece.

“In his declaration, Katz called the Black Justice League a ‘local terrorist organization,’ misgendered one of its alumni leaders, and wrote that a recent Instagram live stream naming the racism of former classmates was ‘one of the most evil things [he has] ever witnessed,’ comparing it to the Communist Party of China’s brutal struggle sessions in which people were beaten and killed,” the op-ed stated.

“Considering that this declaration comes in response to a faculty letter on anti-Blackness at Princeton, spearheaded by Black faculty and addressing a history of exclusion and gaslighting against Black students and faculty, it is disturbing that Katz reserves the word ‘evil’ for the students who championed these changes, rather than for racism itself.”

“Not only is the content of this declaration poorly conceived, but it is also an attempt to distract from the necessity of making anti-racist changes throughout the University as a whole.”

Additional criticism of Katz appeared in the pages of The Princetonian, including another op-ed — and even an opinion piece from Princeton’s President Christopher Eisgruber.

“[T]he fact that we have the right to insult one another does not mean that insulting people is the right thing to do,” Eisgruber wrote. “On the contrary, Princeton’s free speech principles also affirm that “all members of the University community share in the responsibility for maintaining a climate of mutual respect.”

In July, Katz was awarded the 2020 “Heroes of Intellectual Freedom” by the American Council of Trustees and Alumni.

MORE: Cancel culture targeted these 3 profs. They all agree on one thing – don’t cave.