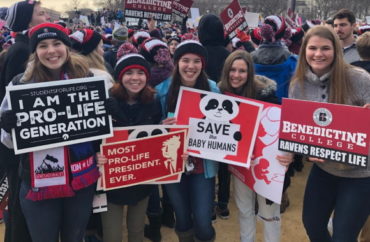 WASHINGTON D.C. — Thousands of college students from across the country were among the more than 100,000 pro-life activists on the National Mall at the annual March for Life on Friday, with some students traveling exceptionally long distances to attend.

Cassady Giefer was one of several hundred students from Benedictine College in Atchison, Kansas, who endured an 1,100-mile bus ride that lasted over 22 hours to participate in the annual event.

For Giefer, a freshman at Benedictine and a first time attendee at the march, standing on the National Mall and marching on Constitution Avenue was a duty.

“I believe that life begins at conception,” she told The College Fix, adding that abortion has cost the world millions of people who might have affected the world in positive ways.

“There’s so many people who were aborted that may have done incredible things to help the world, but we’ll never know what they are,” she said.

While not enduring quite as long of a trip as those from Benedictine, students from the University of St. Francis in Loretto, Pennsylvania, endured a five-hour trip to take part in the march, now in its 47th year.

Rose Duncan, an 18-year-old freshman at USF studying to be a physician’s assistant, said attending the march was an important expression of support for the pro-life movement.

Duncan and her sister Rachel, a junior at the university, both attended the march for the first time with the USF Students for Life chapter. Many in the group held signs declaring “I am the pro-life generation” and “I vote pro-life first.” 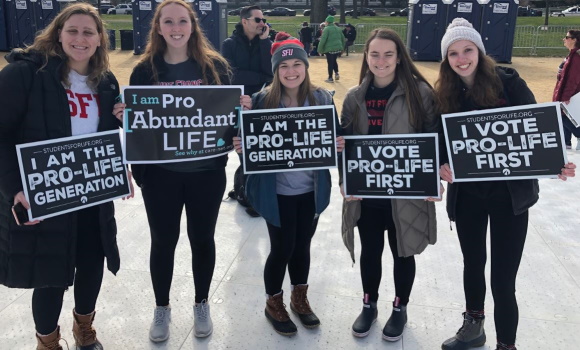 For students at the newly founded East Coast campus of Thomas Aquinas College in Northfield, Massachusetts, coming to the annual march was an expectation.

Nineteen-year-old freshman Irene Collins told The Fix that of the college’s roughly 60 students, 50 had made the trip alongside a small handful of faculty and administrators.

The group that made the trip endured their own seven-hour bus ride down the East Coast to the nation’s capital, but Collins said there was never any question as to if it was worth it.

Collins and fellow Thomas Aquinas College student Margaret Short, a sophomore, both said that the March for Life is a powerful image of “the nation’s people uniting in the capital” for one cause.

Today the students on our new campus in New England made their first trip to the #MarchForLife. Deo gratias! #WhyWeMarch pic.twitter.com/dJkEd3tfjY

The 2020 March for Life was the first to ever be addressed in person by a sitting president, as President Donald Trump delivered the keynote speech at the beginning of the rally.

All of the students The Fix interviewed expressed excitement and gratitude for the president coming to speak to the march, noting his many policy accomplishments promoting the sanctity of human life.

The president, during his speech, touted his administration’s executive order on campus free speech as a major win for pro-life college students seeking to spread pro-life messages on campus, and received a thunderous ovation from the crowd in response.

That executive order made federal funds sent to college campuses contingent upon free speech protections for students. It was enacted in March 2019.

As for the march, it brought together a wide assortment of pro-life individuals, but many in the crowd appeared to be college-aged.

Frances Floresca, 23, a recent University of Utah grad, called the March for Life “the real Women’s March,” USA Today reports, adding she donned a beanie that said “Love them both.”

“We are fighting for women and babies,” she said. “We’re standing for the women who need to be strong so they don’t get an abortion.”