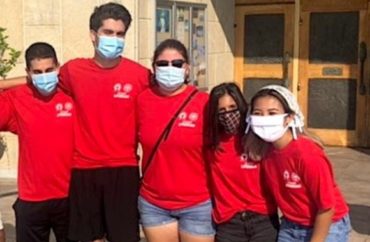 Students and pro-life staffers have mobilized all summer to fight for the unborn, despite the pandemic

Pro-life students this summer did not let the COVID pandemic slow down their plans to reach out to voters this summer. One pro-life student group recently announced a successful summer, which included door knocking, despite the coronavirus pandemic.

Students for Life Action, the political advocacy arm of Students for Life of America, spent all summer calling voters and knocking on the doors of voters. SFL Action, along with the pro-life nonprofit Susan B. Anthony List, said it has made 250,000 contacts with voters this summer.

Students and staffers “knocked on more than 50,000 doors and made more than 200,000 calls,” Students for Life of America’s president Kristan Hawkins wrote in an August 23 opinion piece for Real Clear Politics.

In contrast, the Biden campaign has knocked on zero doors and have no plans to door knock this year, according to an August 4 Politico article.

In addition to mobilizing students from across the country for calling voters, Students for Life Action also had several teams of students that spent two weeks in different states such as Arizona and Michigan canvassing voters.

The students wore masks while knocking on doors and followed social-distancing guidelines.

“Those with the best ground game and with the skills to connect with people on the human rights issue of our day will be the ones who change our culture on the issue of abortion,” Students for Life Action spokesperson Kristi Hamrick told The College Fix in an email.

“SFLAction is training up the Pro-Life Generation to be pro-life champions and leaders, fighting for future generations.”

Hamrick declined an emailed request for proof of their claims on the number of doors knocked on and the numbers of phone calls made.

In some cases, the students were able to help defeat pro-choice Republican candidates. For example in Kansas the group helped defeat an incumbent Republican, Jan Kessinger, who had voted against a pro-life state constitutional amendment.

It’s all part of the group’s broader plan to prepare for what it calls a “Post-Roe America,” referring to the group’s prediction that the Supreme Court will one day overturn the 1973 Roe v. Wade decision that legalized abortion in all fifty states.

One of the college students involved shared his experience with the deployments with The College Fix.

“The experience this summer, going house to house, door to door, talking about abortion and pro-life politicians was grueling but rewarding,” Marcos Sanchez told The College Fix via Instagram messaging.

“It is not glamorous work walking in 100 degree weather for several hours a day,” the Students for Life leader at Chemeketa Community College in Oregon said.

“It is exhausting but what made it worth it was the purpose,” he said. “Knowing that I was having a direct impact in electing a pro-life politician made all the difference.”

While SFL Action made an impact over the summer, the pro-life group will continue to advocate for pro-life politicians this fall, regardless of whether it will be done in person or through digital methods.

Hamrick told The College Fix that Students for Life Action plans to launch a digital campaign to reach out to voters under the age of 30 as well as “potential pro-life non-voters.”

“On campuses, Vote Pro-Life First and Sock the Vote campaigns will be launched, with options for digital engagement only for schools that have not gone back to traditional classrooms,” Hamrick said.

“Our team has been careful to respect the local ordinances on social distancing, but still diligent in getting out the message to Vote Pro-Life First,” she said.