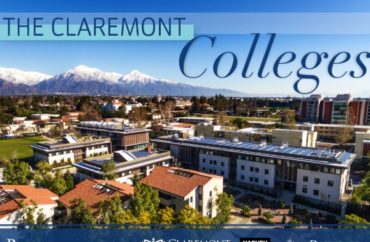 Drew ‘cheers and laughter’ from crowd of mostly professors and students

Abby Martin has worn many hats in her activist career. She was a 9/11 Truther, hosted a show on the Russian propaganda network RT, hosted a show sponsored by Venezuela’s government, and directed a pro-Palestine documentary, “Gaza Fights for Freedom.”

Unsurprisingly, eight components of three liberal arts colleges – Pomona, Pitzer and Scripps of the Claremont Consortium – paid for her to screen the documentary at an event Thursday.

They included two anthropology departments and two gender studies departments, reflecting the alliance between gender studies and anti-Israel activism. The event was hosted by Claremont Students for Justice in Palestine, which is funded by the consortium’s student governments.

When a Jewish student journalist from The Claremont Independent asked a question after the screening, however, Martin couldn’t resist an unfounded dig. The Independent reports:

When Independent staff writer Jordan Esrig asked a question about Hamas’s activities against Israeli civilians, Martins [sic] responded by stating that Esrig, who is Jewish, is associated with “white nationalists,” drawing cheers and laughter from the crowd consisting mainly of Claremont Colleges professors and students. One audience member also yelled out “white nationalist” at the student journalist. Martins [sic] also assailed the journalist as being “tied to an organization [the Independent] that is tied with Breitbart.” The Independent is not affiliated with Breitbart or any external national media outlets.

“The documentary tells the story of Gaza past and present, showing rare archival footage that explains the history never acknowledged by mainstream media,” the event listing states. “Palestinian voices on the frontlines are amplified, including that of journalists, medics, and the family of internationally-acclaimed paramedic, Razan al-Najjar.”

In a preview story, the Independent noted that Martin had marveled “how big Israel’s propaganda apparatus is. “The Israeli communications department receives less than $35 million dollars in funding annually, a fraction of the funding given to the state agencies of Russia and Venezuela where Martin previously worked,” the newspaper wrote.

At Q&A during Thursday’s event, Martin defended Hamas and “placed sole blame on Israel for the lack of peace between both states,” according to the Independent. It quoted her as saying “the US Empire and its criminal proxies […] are preventing international justice and Israel from being held accountable.”

Martin’s co-director Mike Prysner also accused The New York Times of only telling “the Israeli propaganda side of the story.” He called Israel an “attack dog” of the United States.

While Martin has since abandoned her 9/11 trutherism, the Independent notes she recently accused the CIA of assassinating Martin Luther King, Robert F. Kennedy and John F. Kennedy on Joe Rogan’s popular podcast.