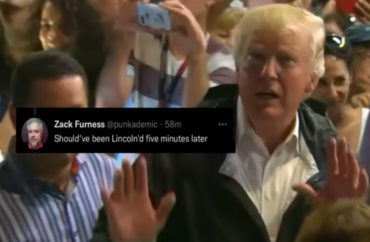 A Penn State University professor said on Twitter over the weekend that former President Donald Trump “Should’ve been Lincoln’d.”

Zack Furness, an associate professor of communications at Penn State University’s Greater Allegheny campus, made the comment in response to a tweet Saturday depicting Trump in Puerto Rico in 2017 throwing paper towel rolls to a crowd after Hurricane Maria ripped through the island, a move that was heavily criticized as highly insensitive.

“Should’ve been Lincoln’d five minutes later” the professor replied, according to screenshots obtained by the Post Millennial.

Post Millennial’s editor-at-large Andy Ngo first highlighted the comment on Saturday, tweeting “[email protected]_state associate communications professor Zack Furness tweeted today that former President Trump should have been assassinated by gunfire. His academic work is influenced by Marxism & critical pedagogy. He previously made a list of people he wanted dead.”

.@penn_state associate communications professor Zack Furness tweeted today that former President Trump should have been assassinated by gunfire. His academic work is influenced by Marxism & critical pedagogy. He previously made a list of people he wanted dead. pic.twitter.com/phmevlSymY

Ngo is referring to a September 2020 tweet from Furness citing a parade of journalists and conservative pundits that he tweeted he would like launched toward the sun:

“I’d like to build an arc and fill it with, Michael Tracey, Andrew Sullivan, Bari Weiss, Andy Ngo, Ian Miles Cheong, Jordan Peterson, Ben Shapiro, and Fox & Friends. And then launch it toward the sun,” according to a tweet from Furness in September 2020, the Post Millennial reported, adding:

On Penn State University’s website, Furness describes himself as an author, researcher, and teacher, per the university’s About page.

“My work as both a researcher and a teacher draws upon a web of influences that include communication and cultural studies, cultural geography, feminist and Marxist theory, anarchism, environmentalism, critical pedagogy, history and philosophy of technology, and punk rock,” Furness wrote online, adding that he has played in several punk bands throughout the years.

Furness has taught several classes at Penn State University, Greater Allegheny, many of which revolve around the media, music, and communications.

One particular communications class, titled “Gender, Diversity & the Media,” explores the cultural, socioeconomic, historical, and political implications of media content, media practices, and media literacy. Course readings and assignments are “designed to help students build deeper understandings of gender, race, ethnicity, ability, sexual orientation and class diversity in media,” the course description reads. “Communication theory helps explain how media representations impact the human construction of meaning in social relationships, in both the US and throughout the world,” according to the course description.