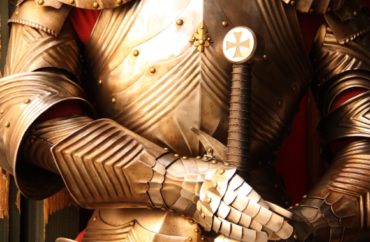 Academics in both America and the United Kingdom have recently taken actions to prevent Geoffrey Chaucer, the “father of English literature,” from being labeled a rapist, racist and anti-Semite.

In late July, Cambridge University medieval and renaissance English Professor Jill Mann resigned from her position on the board of the Chaucer Review, an academic journal specializing in the work of “The Canterbury Tales” author.

The journal had published an essay called “New Feminist Approaches to Chaucer” in which authors Samantha Katz Seal and Nicole Sidhu argued it is time for feminists “to move past Chaucer” because: “He is a rapist, a racist, an anti-Semite; he speaks for a world in which the privileges of the male, the Christian, the wealthy, and the white are perceived to be an inalienable aspect of human existence.”

The authors also provide evidence that Chaucer himself was a rapist, relaying on a 14th century legal document in which a woman named Cecily Chaumpaigne accused Chaucer from a crime known as “De raptu meo.”

Other scholars have argued the word “raptus” could refer to an “abduction” and point out the legal document actually showed Chaumpaigne releasing Chaucer from any legal obligation related to the claim.

Nonetheless, Katz Seal, a professor of English and women’s studies at the University of New Hampshire and Sidhu, an English professor at East Carolina University, argue feminists “should identify” with Chaumpaigne and not Chaucer.

But Mann objected to the negative characterization of both Chaucer the man and his work.

“To approach Chaucer with this mind-set is to substitute a grotesque caricature for the humane values that distinguish him from many other writers of his time, and that students, in my experience, are quite capable of appreciating,” Mann wrote in a letter to the Times Literary Supplement.

It wasn’t the first time Chaucer had been attacked in British academia. Earlier this year, the University of Leicester announced a plan to remove Chaucer from the English curriculum, replacing him with a “selection of employability modules” and a “chronological literary history” determined by the school’s administrators.

The announcement was made after the school vowed to “decolonize” its curriculum.

Meanwhile, in the U.S., Texas A&M English Professor Jennifer Wollock has argued that Chaucer “was no raunchy proponent of bro culture,” but a “daring and ingenious defender of women and the innocent.”

“I believe the movement to cancel Chaucer has been bamboozled by his tradecraft – his consummate skill as a master of disguise,” Wollock wrote in an essay for The Conversation in July.

Wollock, who has researched Chaucer for decades, argues his works are fiction, and he should not be punished for accurately representing unsavory characters.

“Readers often assume Chaucer’s characters were a reflection of the writer’s own attitude because he is such a convincing role player,” writes Wollock. “Chaucer’s career in the English secret service trained him as an observer, analyst, diplomat and master at concealing his own views.”

Rather than being a sexual predator, she notes her research has found Chaucer “supported women’s right to choose their own mates and the human desire for freedom from enslavement, coercion, verbal abuse, political tyranny, judicial corruption and sexual trafficking.”

Wollock notes that Chaucer salutes the heroism of Jews in an early poem called “The House of Fame.” And she defends Chaucer in the Chaumpaigne episode, noting few authors have ever been more outspoken about man’s inhumanity to women.

“It is bizarre that one of the strongest and earliest writers in English literature to speak out against rape and support women and the downtrodden should be pilloried and threatened with cancellation,” she writes.

Neither Mann nor Wollock responded to requests for comment by The College Fix.

Sidhu objected to the charge she is trying to “cancel” Chaucer.

“It is a strange kind of ‘cancel culture’ that produces an entire issue on the writer we are supposedly cancelling,” Sidhu wrote about the edition of the Chaucer Review in which her essay with Katz Seal appeared. “Not to mention that Sam has written an entire book on Chaucer, is writing another one and I have a book chapter and several articles devoted to him.”

“We love Chaucer’s writing but you don’t need to be dishonest about his personal life or his racial politics to think he is brilliant or want to study or write about him,” Sidhu wrote.

“In terms of cancelling, it seems to me that the person who resigns from an editorial board because she doesn’t like something she reads is far more an example of cancel culture than two scholars noting the nuances involved in thinking about the work and life of one of our greatest writers,” she said of Mann’s resignation.