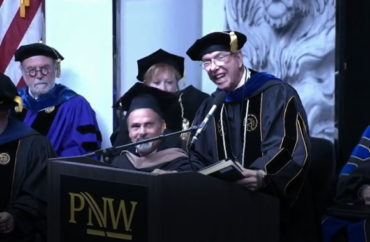 Purdue University Northwest Chancellor Thomas Keon — widely praised in the past for advancing diversity on his Indiana campus — has pledged to push DEI even further after making an off-color joke mocking Asians during a recent commencement ceremony.

“I am truly sorry for my unplanned, off-the-cuff response to another speaker, as my words have caused confusion, pain, and anger,” Keon (pictured at podium) said in an official apology statement issued after the Dec. 10 incident.

A petition launched Dec. 16 demands he resign from his post as well as mandatory “anti-racist training for all administrators, staff, faculty, students at Purdue University Northwest.”

“Although Chancellor Keon issued an apology, which was accepted by the Board of Trustees, it is clear from his statement that he does not understand the impact that his racist behavior had and is having on Asians and Asian Americans, who are already experiencing and coping with heightened levels of anti-Asian hate since the start of the Covid-19 pandemic,” the petition states.

“…Furthermore, the complicity of the other administrators and faculty on stage who laughed at the Chancellor’s comments is equally troubling as it reveals an environment in which racist behavior such as this is accepted, tolerated, and encouraged,” it adds.

“At one point in his speech, Dedelow mentions a ‘made-up’ language he sometimes uses on-air and with family. Keon took the podium afterward and announced, ‘Well, all I can say is,’ before launching into indistinguishable phrases. ‘That’s sort of my Asian version of his,’ Keon said, laughing.”

University of Minnesota Professor Rich Lee, director of his school’s Asian American studies program, posted a clip of the comments on Twitter, adding: “WTF. Can’t get more racist than this @PurdueNorthwest administrator.”

NBC news pointed out Keon received the Giving Back Award in 2016 for his “commitment to diversity and inclusion” and that Purdue University Northwest was ranked in the top 20 Midwest regional universities for campus ethnic diversity by U.S. News & World Report for the 2022-23 school year.

Keon touted his DEI bonafides in his apology statement, as well as pledged to do more.

“Earlier this fall I announced the formation of a PRIDE Team initiative (PNW Respecting Inclusion, Diversity, and Equity) whose mission is to promote an open, respectful and welcoming culture,” Keon stated.

“I am now directing this interdisciplinary team to specifically understand and address issues of importance to the Asian American Pacific Islander community at PNW, and to offer concrete ideas that our university will act upon to ensure that our campuses are places that welcome and value all,” he added.

“In addition, I will meet with members of the Student Government Association to discuss how to best address students’ concerns.”