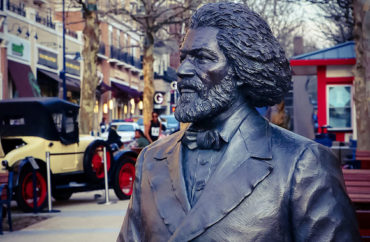 A Q&A with author Damon Root

Damon Root is a senior editor for Reason Magazine whose writing focuses on legal affairs, politics, and history. He is the author of “A Glorious Liberty: Frederick Douglass and the Fight for an Antislavery Constitution,” a book that looks at how the thinking of one famous abolitionist helped push a movement, and a country, toward a more effective means of abolishing slavery. He conversed with The College Fix via email this week about Douglass’s life, the importance of the Second Amendment, and America’s founding principles.

The College Fix: Around Fourth of July this year, many museums and historical buildings in Massachusetts are hosting readings from a speech that Frederick Douglass delivered to the Rochester, New York Ladies’ Anti-Slavery Sewing Society way back in 1852. Who was Frederick Douglass and why do people still look to his words?

Damon Root: Frederick Douglass is one of the most inspiring figures in American history. An escaped former slave who secretly taught himself how to read and write, Douglass ultimately taught the American people a thing or two about the true meaning of the Declaration of Independence and U.S. Constitution. He was a leading abolitionist whose words and deeds helped to shape the course of American politics in the 19th century and beyond.

The Fix: The speech was titled, “The Meaning of July Fourth for the Negro.” What meaning did he find in America’s Independence Day.

Root: “This Fourth of July is yours, not mine,” Douglass told the largely white audience who heard that now-famous speech in July 1852. “You may rejoice. I must mourn.” Still, Douglass refused to forsake America’s founding principles, no matter how far the country had strayed in practice. In the speech, he drew a direct parallel between the signers of the Declaration of Independence—men who “preferred revolution to peaceful submission to bondage”—to the brave abolitionists fighting slavery in the present. He also embraced the natural rights philosophy on which the Declaration and Constitution were based. He made it clear that his goal was to save America from the corrupting influence of slavery by restoring the nation to what he saw as its original, liberty-minded purposes.

The Fix: You have written a book about Douglass’s constitutional thought. How was his thinking about the United States Constitution important?

The Fix: Historian Paul Finkelman wrote from the late Supreme Court Chief Justice John Marshall’s business records, “As he had in 1784, Marshall spent July 4, 1787 buying slaves.” How did Douglass square his belief in an anti-slavery Constitution with the fact that the Supreme Court often did not interpret it in that way?

Root: Frederick Douglass definitely butted heads with the Supreme Court over its proslavery stance. In fact, Douglass delivered one of the best critiques of the Dred Scott decision at the time, attacking it as “this judicial incarnation of wolfishness.” Before “I admit that slavery is constitutional, I must see slavery recognized in the Constitution,” he said. Yet where was it? “Neither in the preamble nor in the body of the Constitution is there a single mention of the term slave or slave holder, slave master or slave state,” he argued. Douglass combined legal analysis with natural rights theory to dissect the notorious opinion. “I have a quarrel with those who fling the Supreme Law of this land between the slave and freedom,” he wrote. Law students can still learn something today from reading Douglass’s critique of Dred Scott.

The Fix: In terms of modern politics, is it correct to say that Douglas would be both pro-Voting Rights Act and pro-Second Amendment?

Root: I’m always hesitant to claim what someone from the past might say about something in the present, but it is certainly the case that Douglass was a staunch advocate of both voting rights and gun rights in his own day. “The liberties of the American people,” he wrote, “were dependent upon the ballot-box, the jury-box, and the cartridge-box.” He thought the 15th Amendment, which enshrined black male suffrage in the Constitution, was the most important part of Reconstruction, and famously clashed with President Andrew Johnson over Johnson’s racist rejection of black voting rights. As for the right of armed self-defense, Douglass once wrote that “the True Remedy for the Fugitive Slave Bill is a good revolver, a steady hand, and a determination to shoot down any man attempting to kidnap.”

The Fix: How was Douglass’s thinking shaped by religion?

Root: Douglass was religious but he was also a sharp critic of much of the organized religion of his day. He had seen too many leading religious figures either sanctioning slavery or turning a blind eye to its evils, and was entirely contemptuous of their hypocrisy.

The Fix: You write that Douglass came into some conflict with suffragettes. What happened there?

Root: Douglass called himself “a radical woman suffrage man” and was one of the handful of men who attended the storied 1848 Women’s Rights Convention in Seneca Falls, New York, where he stood shoulder-to-shoulder with Elizabeth Cady Stanton in support of women’s suffrage. But Stanton, along with Susan B. Anthony, later opposed the 15th Amendment since it granted the vote to black men only. Douglass was of course all-in on the 15th Amendment and he clashed bitterly with his old feminist allies over its ratification.

The Fix: The reading in Amherst on the Fourth of July is being introduced by University of Massachusetts professor of Afro-American Studies Amilcar Shabazz. Generally speaking, who tends to pay attention to Douglass in universities today?

Root: In my view, Douglass should be studied by just about every field in the liberal arts. He is especially studied these days by historians, literature professors, and scholars of race. I’m hoping that my book will help to get the law schools to pay more attention to his constitutional thought.

The Fix: Your subject wrote not one, not two, but three autobiographies in his lifetime. How helpful was that to you in the writing of your book?

Root: Douglass’s three autobiographies were immensely useful to me. I also drew heavily from his many speeches, newspaper editorials, and letters. He was a prolific writer and it was an absolute joy to spend so many research hours in the company of his wonderful prose.

The Fix: Did Douglass come around to celebrate the Fourth of July?

Root: Unfortunately, Douglass had to keep on fighting for his vision of American liberty even after the Civil War was won. As he quickly recognized, the formal abolition of slavery—as vital and long overdue as it was—did not necessarily mean the end of racist government abuse. So long as “the Black man can be denied a vote” and so long as “the Legislatures of the South can take from him the right to keep and bear arms,” Douglass said, “the work of the abolitionists is not finished.” He would spend the final decades of his life urging the nation to finally live up to the great principles contained in the Declaration of Independence and Constitution.