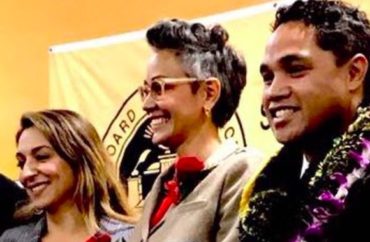 Voters in San Francisco last week successfully recalled three members of the city school board, the first such successful vote in the city in almost 40 years.

Gone are Alison Collins, Faauuga Moliga and board President Gabriela López. Mayor London Breed will select their replacements once the recall is official, the San Francisco Chronicle reports.

“So if you fight for racial justice, this is the consequence,” López tweeted. “Don’t be mistaken, white supremacists are enjoying this. And the support of the recall is aligned with this.”

López also retweeted a post alleging the recall “was funded by republican billionaires, led by […] “reopen the schools” moms that used id politics and anti-blackness to turn out votes within the conservative asian immigrant community.”

Collins echoed her now-former school board colleague, tweeting that former Vice President Mike Pence’s interest in the recall was a “dog whistle,” and that the recall “has emboldened more dehumanization of Black folks.”

According to the Chronicle report, recall supporter and district parent David Thompson exclaimed “This [vote] is what happens when you try to rename the schools in the middle of a pandemic!” while noting the vast diversity of those who voted similarly.

Indeed, the renaming of over 40 schools in the midst of the COVID pandemic especially irked city parents. During the renaming process, the board revealed it didn’t know some important history, such as the difference between Franklin D. and Teddy Roosevelt. López referred to criticism of such as attempts to “discredit” the school board.

For her part, Collins attempted to downplay the significance of the renamings after the recall; however, in a subsequent tweet she said no child should have to attend a school named after “child predator” Thomas Jefferson.

Moliga tweeted out a post-recall thank you to his supporters, expressing pride in a “menstrual equity act” led by UC San Francisco students.

Thank you again, as I stepped off the school board I had a few items coming to conclusion.I’m proud Balboa football team will get their championship rings,menstrual equity act plans led by UCSF students are in process, and the SCDC resolution.Honored to have worked with everyone.

Even before the pandemic began the board made a stink about a mural of George Washington in … the city’s George Washington High School. López and Collins said it was “emotionally draining” to hear testimony about the “violent” and “demeaning” portrait.

The board eventually backtracked on renaming plans during the recall effort with López saying “mistakes were made” for which she took responsibility.

Collins had the biggest margin of defeat in the recall with over 78.5 percent voting for her ouster. López was defeated with just under 75 percent, and Moliga with 72 percent. All three are eligible to again run for their seats in November; López and Moliga have not ruled out the possibility.