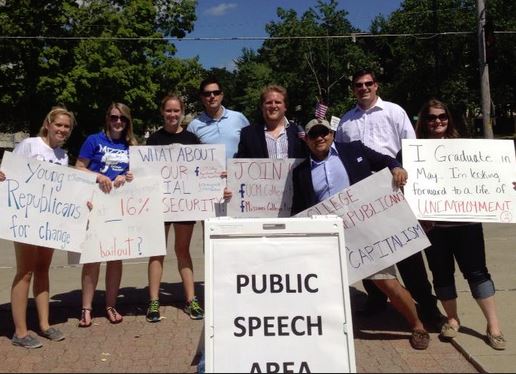 My name is Christopher D. White, author of the article published last week on The College Fix that highlighted the U.S. Secret Service’s rude and ill treatment of six Missouri College Republicans at an Obama speaking engagement at the University of Central Missouri.

For those unfamiliar with the controversy, allow me to delve into some particulars.

Last Wednesday, members of the Missouri College Republicans were cordoned off to the UCM “public speech area,” far from the recreation center used to house President Obama and his audience, to protest the deleterious policies promulgated by our current president.

After a long day of peaceful demonstrations, the College Republicans decided, about 20 minutes before the president was scheduled to give his talk at 4 p.m., that they would, with tickets in hand, head toward the recreation center to watch the speech.

Nowhere on the ticket, a copy of which was provided to The Fix, stated a cutoff time for admittance.

The young Republicans, dressed in politically partisan Tea-Party t-shirts and College Republican attire, were stopped by a member of President Obama’s security detail and told to turn around, that the doors to the recreation center were shut and locked, rendering their tickets worthless.

The reason stated can be summed up simply: for the safety of the president, two separate students turned away from the event told The Fix.

In the wake of outrage over the news that these Republican students were rejected from the speech, University of Central Missouri and the Secret Service pushed back recently against my initial article.

University officials did not respond to my phone call seeking comment, but did take their case to the New York Daily News, telling the newspaper: “No one who presented a ticket was turned away prior to all doors being locked in accordance with Secret Service procedures.”

Having arrived about 20 minutes before the president was supposed to deliver his speech, the students were not late for the event, but rather came after the Secret Service decision to close and lockout ticket-holding audience members.

An interesting aside – the president did not speak until 5:30 p.m., nearly two hours after the students were turned away from the locked event. Indeed, when the students were rejected, POTUS had yet to arrive in the state of Missouri.

Another response to the students’ claims came way of Secret Service Spokesman Brian Leary, who told Fox News the rec center doors were locked because the event had reached maximum capacity, saying: “The event at University of Central Missouri was closed to any additional general public due to the event site reaching maximum capacity.”

However the students had tickets to said event, as evidenced by the image shown here.

Student Debby Huebert, who was with the Missouri College Republicans, gave her version of events to The College Fix in an email on Saturday, saying as they headed to the event, they were stopped in their tracks. When they explained to the agent they had tickets, he told them “it doesn’t matter, the doors are closed and locked. No one else can get in,” she stated.

Huebert goes on to note:

We were all very surprised; this was definitely the last thing we expected to hear. While we sat there talking amongst ourselves about what to do next, the officer suddenly spoke up and said, ‘Listen, it doesn’t matter if the president is Democrat or Republican, the secret service has a duty to protect the president and it’s as simple as that.’ We looked at him in surprise, because none of us said anything to the contrary.

This was the only reason we were given for being turned away at the door. No one said anything about lack of space or being there late … In fact, we were stopped at 3:43 pm. I remember because I looked at the time on my phone and said, ‘Come on guys, I don’t want to be late!’ To my knowledge, people were even leaving early anyway because it was so hot in there and the president was VERY late. We later discovered that he hadn’t even landed yet when we were stopped!

So people were leaving early – the doors were not locked.

People were leaving early – there were seats to spare.

The College Republican students had tickets to the event – and the agent knew they were Republican, as evidenced by his comment that it wasn’t about politics.

POTUS was running extremely late, and with today’s technology, his security detail was well aware of that. And here, a patriotic group of students just wanted a glimpse of the president of the United States, wanted to hear him speak.

That is saying something. They should have been let in.

As an aside, the University of Central Missouri also failed to address student concerns about its “public speech area” policy, the ramifications it has for free speech rights, the chilling effect it has on freedom of expression, and its overall dismissive attitude toward political viewpoints deemed outside of the mainstream.

While it is important that the Secret Service ensure the safety of the president while traveling to universities, the question remains: was it appropriate for the Secret Service and the university to redirect all protesters hundreds of yards away from the recreation center? No.

That opinion is shared by tens of thousands of college students across the country.

University of Missouri student Jake Loft, an active Republican (who was unable to attend the Warrensburg event), told the College Fix “the fact that there is a ‘public speech area’ is an infringement on our basic right to free speech. Doesn’t our right to free speech follow us wherever we go?”

I should hope so.

Shunting young protesters—regardless of political persuasion—off into a barren hinterland, devoid of human contact, in hopes that his or her voice will never reach the ears of an offended person, seems the height of intolerance.

UCM and its “public speech area” policies during presidential visits is ostensibly saying that their students can have freedom of speech—but only in prescribed areas of the administration’s choosing and if no one hears what they have to say.

This prescription raises an important note: in order for something to be considered free, it must not be restrained.

Going forward, I certainly hope that the Secret Service tweaks its attitude toward persons who appear to hold different political ideas than the president who they are protecting, and I hope that the UCM considers throwing their “public speech areas” onto the scrap heap of human history.

Fix contributor Christopher White is a University of Missouri graduate student, an editorial assistant for The College Fix, and Missouri state chairman of Young Americans for Liberty. He may be reached at [email protected].